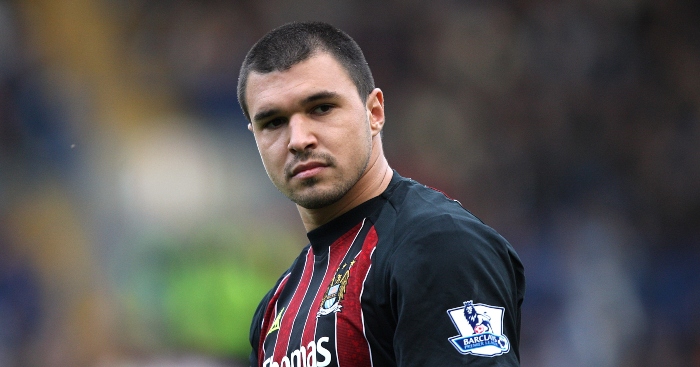 In July 2009, Manchester City were still trying to find their new identity as a European superclub.

The previous year’s takeover had brought big signings like Robinho and, erm, Shay Given, but remnants of Sven-Göran Eriksson’s squad were still there.

Luckily, there was a pre-season campaign during which they’d be able to separate the wheat from the chaff, leading to a very interesting starting XI for a trip to face 1860 München in July 2009.

City’s first move at the start of the 2009-10 close-season was to add Premier League experience to their ranks. Taylor joined on a free from Aston Villa on the same day Gareth Barry joined from the same club, while Roque Santa Cruz brought his goalscoring form over from Blackburn… at least in theory.

Taylor’s start in Germany was followed by just one more in a competitive environment, a 4-2 victory at Scunthorpe in that season’s FA Cup.

He stuck around for three full years, though, before spells at Reading, Leeds and Southampton, where he ended his career in 2018 after 0 games in two years.

Reminder of the announcement video that Southampton made for Stuart Taylor's one year contract renewal. Way ahead of their time. pic.twitter.com/JxCx4duEqJ

Trippier was one of a number of academy players given a chance in pre-season back in 2009, but his path to the first team was blocked by a number of more senior players.

He wasn’t able to break through, spending part of the 2009-10 season on loan at Barnsley before further loan spells eventually brought a permanent switch to Burnley in 2012.

He traded Turf Moor for Tottenham in 2015, breaking into the senior England set-up two years later, and is set to join Atletico Madrid for £20million this summer.

Liverpool-born centre-back McDonald was brought back after spending some of the previous campaign out on loan, but he was left out of the squad for the pre-season Vodacom Challenge tournament in South Africa.

A loan spell at Walsall followed, with the West Midlands club bringing him in on a permanent basis in December 2009.

He dropped down into non-league in 2014 and is now on the books of Northern Premier side Nantwich Town.

The defender played once for City’s first-team in 2010, and also featured in a pre-season victory over Portland Timbers in July of that year, but he’s established himself as a Clarets mainstay in close to a decade with the club.

Academy product McGivern had actually made his international debut for Northern Ireland before this game but would have to wait until 2011 for his one and only Premier League outing for City.

He played 20 minutes in a victory over Sunderland, in a team which also included the likes of Yaya Touré, Vincent Kompany and David Silva, but ended up leaving permanently in 2013 to join Hibernian following a successful loan spell.

The FA Youth Cup winner returned to Northern Ireland in 2018 but has had to battle with injuries during his time under David Healy at Linfield.

Weiss was one of the squad players to follow his trip to Germany with inclusion in the squad that travelled to South Africa, having also made his Premier League debut at the end of the 2008-09 season.

The Slovakian was fancied by many to break through in 2009-10, but he moved on loan to Bolton Wanderers in search of regular top-flight football, playing 13 times for the Trotters.

The winger left Manchester in 2012, spending time in Italy and Greece before carving out a niche for himself as a goal-getter in Qatar. He’s now at Al-Gharafa, finishing as the club’s joint-top scorer in the 2018-19 season.

When Zabaleta moved into West Ham’s midfield, it was easy to forget he’d done the same early in his City career.

The Argentine spent some time in the middle when Micah Richards was also in the starting line-up, though the bulk of his 300+ games for the Manchester club came at right-back.

Now 34, he’s got at least one more year at the London Stadium to come.

He left for Leeds in 2010 having never played a competitive minute for City and has been a mainstay of many a Championship midfield.

The 2019-20 season will be his sixth at Middlesbrough, for whom he played his one and only Premier League season in 2016-17.

Petrov was a pre-takeover signing but impressed enough under Mark Hughes to stick around until 2010.

The Bulgarian winger left City having scored 12 goals in 72 games, and spent another three years in England with Bolton before ending his playing days with a short stint in Spain and a slightly longer one back at CSKA Sofia.

He has returned to Manchester for the occasional visit, which is nice.

He still managed 30 games in all competitions in the 2009-10 season, but his final league start came in March and he ended up moving to Aston Villa over the summer.

Injury has restricted him to just five senior games since 2016, and he was most recently on the books of Bolton Wanderers but left without making it onto the pitch.

Another player who struggled with injury throughout his career, Bojinov joined City in 2007 after helping Juventus win Serie B but made just 12 appearances for the first team following setback after setback.

The Bulgarian is back home now after a bit of globetrotting, returning to Botev Vratsa after helping Levski Sofia quality for Europe in 2018-19.

He also has 43 international caps to his name but last played for his country in 2015.