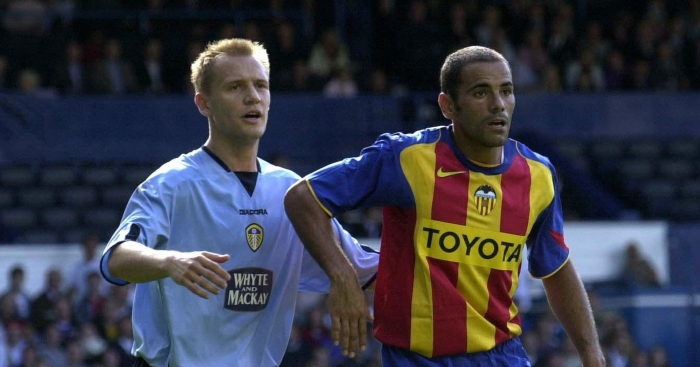 To call 2004 a turbulent time for Leeds United might not mean much, given the lack of years since then which haven’t carried that descriptor, but it was messier than many before or since.

The Whites had just dropped down from the Premier League with a squad made up of youngsters, loanees and for some reason the miraculously unsold Mark Viduka, and a significant summer turnover left a near-unrecognisable group preparing for a crack at the Championship.

Viduka, Alan Smith and Paul Robinson were among the two dozen players to make way by August, while another 20+ would come in over the course of the season, but first there was the small matter of pre-season and a clash against Valencia which would naturally bring back bittersweet memories.

Barely three years had passed since Leeds met Los Che in the semi-finals of the Champions League, but the clubs had moved in very different directions since.

While Leeds’ decline was eye-scratchingly dramatic, Valencia only strengthened. They followed their appearance in the Champions League final with a La Liga and UEFA Cup Double in 2004, though the following season saw Claudio Ranieri replace the Liverpool-bound Rafa Benitez.

The English side, meanwhile, took on their opponents on 25 July with a combination of players on their way out and a few who were anticipated to provide the backbone in a difficult upcoming season, coming back from 2-0 down to draw 2-2 with the Spanish champions.

Teenage goalkeeper Carson had played just three times for Leeds in their Premier League relegation season, but Robinson’s move to Spurs left him and new arrival Neil Sullivan to battle it out for a starting spot.

Sullivan was preferred between the sticks, and Carson moved to Liverpool in January, playing an important part in the run to the Champions League title with a big performance against Juventus.

He was unable to oust Pepe Reina at Anfield after the Spaniard’s 2005 arrival, however, and had a few years as a Premier League number one elsewhere before spells at Bursaspor and Wigan. He moved to Derby County in 2015 and is about to embark on a fifth season for the club.

One of the few senior players to remain at Leeds post-relegation, Kelly was a regular starter during Leeds’ first two seasons in the Championship, scoring a rare goal with a brilliant strike in a 3-3 FA Cup draw with Wigan in 2006.

The Irish international ultimately spent his entire career at Leeds, retiring in 2007 after playing more than 500 times for the club to obscurity in Ireland.

Another veteran of the 2000-01 Champions League campaign, during which he played in the famous 1-0 victory over AC Milan, Duberry was part of Leeds’ starting XI for the opening day of the Championship season.

He didn’t end the campaign at Leeds, though, joining Stoke on loan in the middle of the season and making the move permanent in the summer.

The one-time Chelsea trainee ended his career in 2013, and has recently dipped his toe into the world of poker.

Butler was brought in on a free after Leeds’ relegation having been part of the Wolves side that dropped out of the top flight at the same time, and the Irishman regularly captained the side in the absence of the oft-injured Lucas Radebe.

He racked up 100 games for Leeds in a transitional period for the club, including 90 minutes in the 2006 Championship play-off final defeat against Watford, but had his contract cut short in 2007 and retired a couple of years after that.

It should be noted that he is no relation to the Paul Butler who worked as Leeds’ assistant coach during Thomas Christiansen’s reign.

Kilgallon found himself managed by six different men in the 2003-04 season – three at Leeds and three during a loan spell at West Ham – so the turmoil of the 2004-05 close season must have seemed calm by comparison.

The young Yorkshireman played 26 league games in the 2004-05 campaign and earned a move to Premier League outfit Sheffield United in 2007.

Now 35, he is looking for a new club after leaving Hamilton Academical.

A Leeds academy product and Football Manager must-sign, Richardson scored the winner against Derby in Leeds’ first game back down in the second tier and was a regular for much of the season.

The Rotherham-born full-back ended his Leeds career in 2009 with more than 150 appearances to his name, before flitting around the Football League before ending his career back in Yorkshire with Doncaster Rovers.

Sixteen-year-old Walton was making his debut against Valencia, and had an eventful outing with a goal from the penalty spot and a late red card

“I managed to get in the team and stay in the team because we basically didn’t have enough numbers to train,” he told us in 2017. He played 33 games that season, but saw less action the following year before being snapped up by Premier League Charlton Athletic.

He has dropped down into non-league of late, and joined Havant & Waterlooville as a player-coach this summer.

Spring scored Leeds’ second goal in the draw with Valencia, beating Andrés Palop with a free-kick, but that was about as good as it got for the midfielder, who joined after more than 200 games for Luton Town.

He scored just once, in a draw with Ipswich, before moving to Watford, starting in the following season’s play-off final as the Hornets thrashed Leeds 3-0.

After featuring a handful of times in the Premier League, Spring dropped down through the divisions before settling in non-league with Hemel and Hitchin.

He returned to Hemel Hempstead Town as assistant coach during the 2018-19 season, serving under Joe Deeney during the former manager’s time in charge.

Pugh joined Leeds as part of the deal that took Alan Smith to Manchester United, and the left-sided player spent two years at Elland Road before re-joining the club in 2011.

Despite only playing a handful of games at Old Trafford, he would later return to the Premier League as part of Tony Pulis’ Stoke City side, playing 37 top-flight games for the Potters.

He was back in Staffordshire with Port Vale in the 2018-19 season and will remain at the club as part of the coaching staff following his retirement.

Like Kilgallon, Deane had spent part of the previous season with West Ham, albeit on a permanent deal. He returned to Leeds in 2004 after the best part of a decade away.

He was already 36 at the time, but chipped in with a handful of goals in his one season back at the club – notably scoring four in a 6-1 defeat of QPR – but still managed a stint in Australia before retiring in 2006.

The Englishman has been similarly well-travelled as a manager, spending two years in charge of Norwegian outfit Sarpsborg 08. He returned to England to help establish the Leeds United Sports College in 2019.

Joachim was yet another of the summer arrivals, joining from Coventry City, but the striker only managed two goals in a Leeds shirt.

Seeing as he was already almost 30 at the time, you might have assumed he was long retired, but this is not the case.

The veteran has still been banging in the goals in non-league, scoring a hat-trick on his home debut for Aslockton & Orston in the Nottinghamshire Senior League in 2018.

Another lad who says he has played at a good level signs up for 18/19
Julian Joachim pic.twitter.com/QZ7S3fsAdR

Leeds made seven changes, while an eighth sub – Adam Federici, on trial shortly before he ended up joining Reading – stayed on the bench.

Lucas Radebe got a brief run-out, as did fellow centre-back Clarke Carlisle, while academy kids Simon Johnson and Jamie McMaster were also given minutes.

The other three to take to the field were experienced duo Steve Guppy and Craig Hignett, both of whom had joined from Leicester City that summer, and Tomasz Rząsa, a Polish international who was on trial but never did enough to make an impact… except on Valencia forward Salva, who he clattered into late in the game.