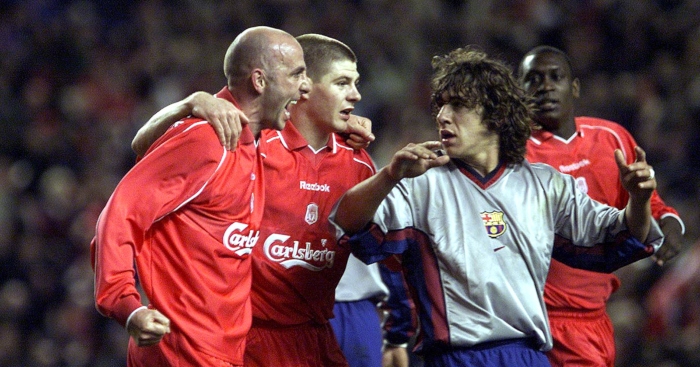 Liverpool and Barcelona have a proud history in European football competitions – and there are usually fireworks when the two sides meet.

The Reds famously won in the Nou Camp in a 2007 Champions League clash remembered best for Craig Bellamy’s golf antics, while Liverpool also triumphed in the semi-final of the UEFA Cup in 2001.

We’ve taken a look back at the XI named by Gerard Houllier for the 1-0 victory over Barca in the second leg of that tie.

“Every time I see Liverpool play I think, ‘F*cking hell, I should be there,'” Westerveld told The Guardian in 2002.

“I thought I’d found my home; Liverpool was the club for me,” he added. “I loved every minute and the fans were fantastic. Playing in front of 45,000 at Anfield is 10 times better than playing in front of 100,000 at the Camp Nou.”

Westerveld was hardly the most reliable goalkeeper, and it was no surprise to see Gerard Houllier replace the Dutchman with Jerzy Dudek, although the decision still rankled with the stopper.

After retiring in 2013, Westerveld moves into goalkeeping coaching but is now an agent with World Soccer Consult. He also found himself unexpectedly back in the public eye in 2016 when his name appeared in the Panama Papers.

Currently managing Western Sydney Wanderers in A-League, Babbel scored in the UEFA Cup final victory over Alaves, but the defender’s Liverpool career came to a halt when he was diagnosed with Guillain-Barre syndrome.

The former Germany international managed to beat the illness before ending his playing career with spells at Blackburn Rovers and Stuttgart, who he has also managed.

“It was the best time of my career,” Henchoz told the Liverpool Echo in 2015 of his six years at Anfield. “I was playing the best football personally, and obviously playing in such a great club and winning a few trophies. I really enjoyed it.

“It was just a shame we couldn’t win the league in 2002 when we finished second behind Arsenal. I think just before that the club was having a hard time and Gerard Houllier came in and started to build a team where we were very solid and then in 2001 we won the Treble. Then in 2002 we were nearly there. We were thinking 2003 could be our year and actually we went a bit backwards for various reasons.

“But looking back we had a strong squad at the time, we were only missing a small piece to win the title with the squad we had.”

The popular defender left Liverpool in 2005 before retiring three years later, and in February 2019 he was appointed manager of Swiss outfit Neuchâtel Xamax, where he began his senior career.

If you want to know all about how great Sami Hyypia was for Liverpool, read this.

Sadly, his excellence as a footballer does not appear to have translated to a successful career as a manager, given he has left his last two jobs, at Brighton and FC Zurich, with both clubs in their respective relegation zones.

Generally a centre-back, Carragher was forced to operate at left-back due to the strength of the partnership between Henchoz and Hyypia.

You know all about him, so save us some work.

A goalscorer in the Champions League final four years later, 2000-01 was possibly the highpoint of Smicer’s Liverpool career as he made more appearances and scored more goals than in any other campaign.

The day after retiring as a player, Smicer was appointed into an administrative role with the Czech Republic national side before becoming a coach at Slavia Prague.

In 2014, he ran as a candidate to become a Czech Member of the European Parliament, while he recently opened a hotel.

Another Liverpool cult hero, Hamann is perhaps best remembered for helping change the course of the 2005 Champions League final having entered the game as a half-time substitute.

After a short spell in coaching in management following his retirement as a player, Hamann has become more comfortable working in the media, although he told The Sunday Times in 2017 he would like to work as a director of football.

Rangers manager, did alright as a player at Liverpool. 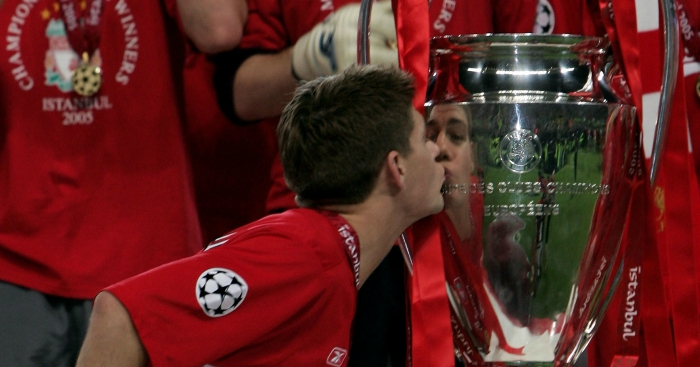 The cult hero of the 2000-01 campaign, McAllister was 35 when Liverpool surprisingly signed the midfielder on a free transfer from Coventry City, but the Scot played a huge role in their Treble success.

And McAllister’s penalty was the difference against Barcelona in the semi-final, which he celebrated by screaming into the face of Carles Puyol.

“Puyol is ranting a wee bit in Spanish, I have no idea but it’s obviously not nice, so that marks the card,” McAllister later told Graham Hunter’s Big Interview podcast. “I go high to the keepers left, probably higher than I wanted to go, that little moment where your heart flutters, ‘That’s where I meant to put it!’

“My first instinct was to turn and look for Puyol, and I give him a bit of Scottish straight back, and swing a clenched fist ‘Bang! You’re out. We’ve done it.’ But, Puyol was looking for me, he was trying all sorts before it.”

And the final was equally memorable for McAllister, who scored and was named man of the match against Alaves – although that’s not what stands out about the victory.

“I’m just about to try and hit a little corner to Emile Heskey at the near post, Robbie is stretching out his hamstrings, something comes flying out the stand, comes whizzing past Robbie, past me and hits the deck.

McAllister is now assistant manager to his former Reds team-mate Gerrard at Rangers.

We’re sad people don’t remember Owen as the brilliant goalscorer of his Liverpool heyday anymore, but then he has spent his career post-retirement doing sh*t like this… 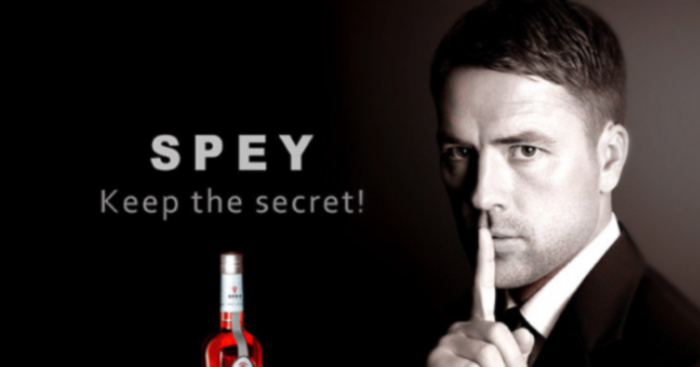 A crucial cog in Houllier’s Liverpool side, we recently met Heskey at Wembley and can confirm he is a very nice man.