Where has this Thierry Henry sitcom cameo been all our lives? 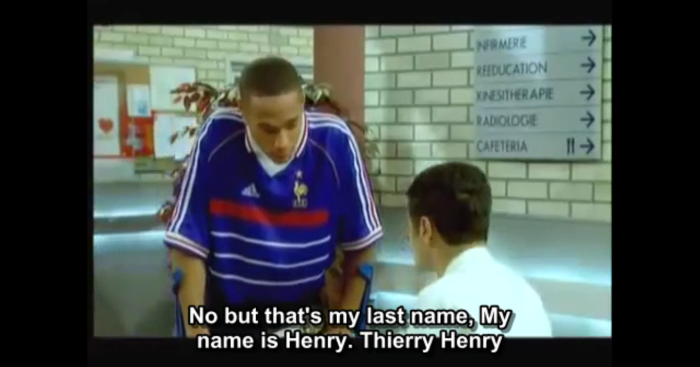 Thierry Henry may be best known for his goalscoring exploits with Arsenal and France, but we cannot stop watching his cameo in a French sitcom from 1999.

The show in question was called H, named after the three words that supposedly characterised the show; Humour, Histoire et Hôpital (Humour, Story and Hospital).

Set in the Parisian suburbs, H charts the lives of a collection of hopelessly careless medical professionals that find themselves in surreal situations.

Which, in part, explains why Henry found himself dressed helpfully in his France replica shirt (years before the idea had entered John Terry’s head), carrying crutches and standing in the waiting room.

Here he is greeted by Djamel Driddi, the switchboards operator in Orthopaedics and a man so stereotypically French you start to suspect John Cleese had a hand in the scriptwriting.

With the premise of filling out an information sheet, Driddi plays the role of stubborn busybody we’ve all been on the receiving end of at some time.

Accusing the French striker of giving his surname as his first name, then that his occupation of footballer was merely a hobby, Driddi seems intent on driving Henry insane.

Luckily, the responses carry a level of patience that must have served Henry well during France’s 2010 World Cup meltdown.

It’s only when the Arsenal legend, despite not wearing his winner’s medal, declares himself a World Cup winner that the piggybank of pennies finally drops.

Adopting a voice two decibels away from a bellow, Driddi seems much more enamoured by Henry’s relationship with Zinedine Zidane than his role at France ’98.

The show ran for four series between 1998 and 2002, neatly encompassing France’s spell as World Champions and their Euro 2000 success. As if knowing what was to come, the show ended months before France’s disastrous defence of their trophy in South Korea.

We cannot believe this clip of surreal comedy has escaped our attention until now. While Henry plays his part well, Driddi steals the show. His performance encapsulates a character that seems a boulangerie of baguettes short of a full picnic.

Our advice is to click play and treat yourselves to some exquisite French comedy.