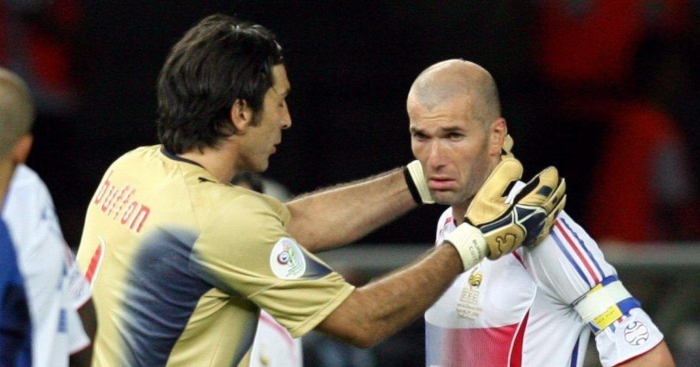 Few players in the history of the game have appeared so in control of their own destiny as Zinedine Zidane.

Some  critics reckon Zidane lacked the consistency to warrant his reputation as one of the greatest players of all time.

But even if there is an element of truth to this argument, Zidane’s ability to produce extraordinary acts when they mattered most (a trait which has seemingly fed into his players as Real Madrid boss) and mould big games in his favour means his legacy is befitting.

There is, of course, one obvious instance when Zidane appeared to let the mask slip, when his destiny unravelled out of control, but it ultimately only added to the allure of his personality.

Walking past the World Cup trophy, head bowed, after being sent off in France’s defeat to Italy in the 2006 final for headbutting Marco Materazzi is arguably the defining image of Zidane’s career. Yet rather than prompt questions of a man out of control, it is instead presented as the action of a man who was only willing to do things on his terms.

But numerous questions still remain about Zidane’s headbutt that day. Mainly: Why then? 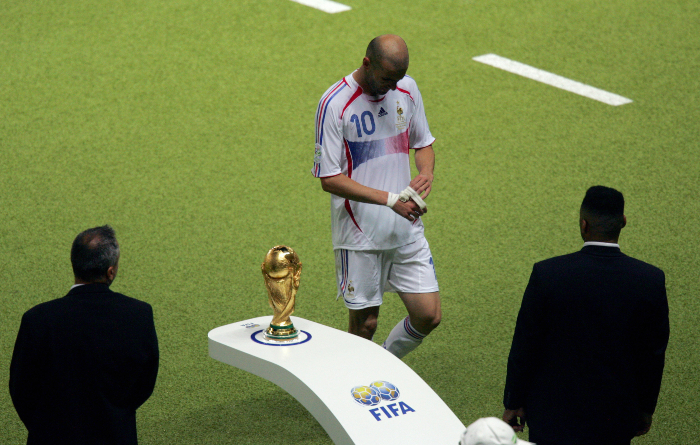 In an interview with Spanish publication AS in May, Materazzi lifted the lid on what he said to Zidane that evening in Berlin: “There had been a bit of contact between us in the area. He had scored France’s goal in the first half and our coach (Marcello Lippi) told me to mark him.

“After that first brush between us, I apologised but he reacted badly. After the third clash, I frowned and he retorted, ‘I’ll give you my shirt later.’ I replied that I’d rather have his sister than his shirt.”

Would that really be enough for a player as experienced as Zidane to opt for such an act of self-sabotage in his final match as a professional? Surely he had been subjected to similar insults from both opposition players and terraces throughout his career?

As Ed Smith writes in his book What Sport Tells Us About Life: “That might have been the trigger, but the deeper causes lay elsewhere.”

A former England cricketer, Smith has witnessed first-hand the inner workings of a professional athlete’s mind. He suggests what separates the likes of Zidane from mere mortals who take to the field is their sense of certainty, their belief that the fate they have envisioned for themselves – volleying the ball into the top corner with your weaker foot in a Champions League final, say – is utterly inevitable.

“That belief can be so strong that not only your own team but even the opposition can fall under its spell.”

Zidane had started the World Cup looking out of sorts before suddenly appearing in the quarter-final against Brazil – the victims of his heroics in the 1998 final – with an other-worldly performance that made it seem he was personally controlling the other 21 players on the pitch.

He then scored the only goal in the semi-final win over Portugal and opened the scoring in the final after just seven minutes, a man so in tune with his own narrative he converted his penalty with a Panenka that dared to kiss the bar twice on its journey over the line.

But Italy didn’t stick to Zidane’s script. Materazzi, a specialist in his role as the pantomime villain, equalised in the 19th minute; Luca Toni almost made it 2-1 with a header that crashed off the bar; the game went to extra-time.

Perhaps this only strengthened Zidane’s sense of inevitability: a 30-minute encore to bend the grandest stage to his will. Then, in the 104th minute, something changed.

Having ghosted into the penalty area, Zidane found himself unmarked around the same penalty spot he had earlier scored from and was picked out by Willy Sagnol’s cross from the right wing. He gracefully leapt to guide a firm header towards the roof of the goal; his final triumph had arrived. But Gianluigi Buffon saved it.

Throughout the awarding and converting of his earlier penalty, Zidane’s reaction was notable for an almost psychopathic lack of emotion. Here, he exploded with rage, screaming in anguish, unable to comprehend the existence of an alternative destiny.

“The greater the inflation of a champion’s willpower, the greater the deflation when it is punctured,” Smith writes. “Zidane’s deflation, like his career as a whole, was on an epic scale.”

Six minutes later, he was sent off. When Buffon arrived on the scene to try to console him, Zidane appeared so crestfallen he was momentarily pictured on the verge of tears, like a child whose parents were not going to relent and give him what he wanted. Italy went on to win in a penalty shootout in which France were deprived of their deadliest penalty taker.

Zidane’s self-delusion may have scuppered him in the final game of his career, but it was that very same trait which helped him get there in the first place. This was not Muhammad Ali retiring after being pummelled by Trevor Berbick, this was the perfect ending for an imperfect enigma.

Indeed, you wouldn’t put it past Zidane to have known this all along.