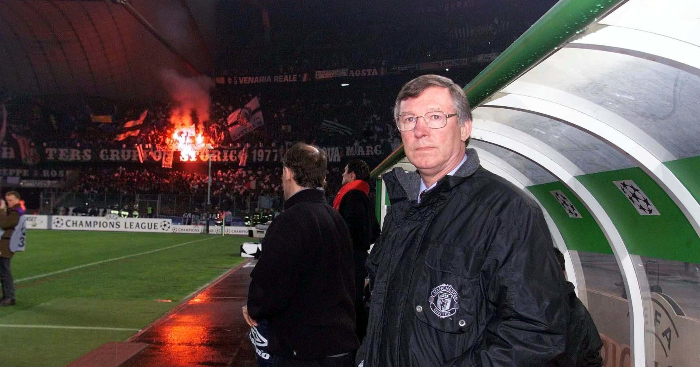 The Champions League will always provide us with moments of brilliance to remember, but in terms of drama and excitement, the competition has never been better than in the late 90s.

It has become something of a formality in recent years have consolidated their power and wealth into consistently dominating the knockout stages.

But it hasn’t always been that way. And in 1998-99, the latter stages treated us to a classic combination of old-school romance and unpredictability in what very well may be the best ever edition of the Champions League.

A special set of semis

The four semi-finalists encapsulate what was so special about that year. The four managers that contested them – Alex Ferguson, Valeriy Lobanovskiy, Ottmar Hitzfeld and Carlo Ancelotti – are all legends in their own right, with 11 major European trophies between them.

Yet despite featuring the biggest names, it wasn’t a given any of them would make it deep into the competition. Manchester United and Bayern Munich had only made one Champions League semi apiece in the preceding six years, while Juventus had been a standard-bearer in Europe but were suffering a dire domestic season. At this time it wasn’t uncommon for a side from a smaller footballing nation (Ukraine’s Dynamo Kyiv in this case) to make waves.

But these were historic sides. Juventus still boasted a spine that had dominated Italian football from the mid-90s and had reached the final in each of the previous three years, while United, Bayern and Dynamo were all going into the business end of the season looking to complete historic Trebles.

One of the more common names you’ll find in highfalutin football histories, Lobanovskyi can be filed alongside the likes of Herbert Chapman, Rinus Michels and Marcelo Bielsa as giant figures in the tactical development of the game.

By the late 90s, he was well into his third spell in charge of Dynamo Kyiv, having led them to the Cup Winners’ Cup in 1986 when they famously beat Atletico Madrid 3-0 in the final. Two years later he’d lead the USSR to the final of the European Championships, having beaten Italy in the semi. Carlo Ancelotti, on the losing side that day, called them “simply unbeatable”.

Dynamo Kyiv’s run to the latter stages of the 1998-99 Champions League – just three years before Lobanovskiy’s death – was a beautiful late chapter in the career of a coach who had proven himself as one of football’s great minds, with a swashbuckling, energetic set of Ukrainian youngsters that played in his trademark high-pressing style.

Their crowning achievement that season was beating reigning European champions Real Madrid (who would regain the trophy the following year) in a 3-1 triumph on aggregate in the quarter-finals.

Andriy Shevchenko, who had scored a hat-trick in Barcelona the season before and was swiftly establishing himself as one of the world’s deadliest strikers, scored both goals in the Ukrainian capital and went on to tie with Dwight Yorke as the competition’s top scorer with eight goals.

They would have been worthy winners and looked like they were going to the Camp Nou final as they led Bayern Munich 3-1 in the first leg of the semis. But Dynamo let it slip, drawing that home leg 3-3 before losing 1-0 in Bavaria.

Like Ajax 20 years later, that sensational young team was destined to be broken up. Shevchenko fulfilled his potential in Milan, while Oleh Luzhny and Serhiy Rebrov were bound for north London. Like Ajax, they’d recover to lift both domestic trophies that season.

Jupp Heynckes delivered Bayern Munich’s first and only Treble back in 2013. Yet they came so close in 1999, only to have to settle for just one trophy.

By the time they’d made it past Dynamo in the semis to make it to the Camp Nou that May, they’d long since wrapped up the Bundesliga title with a remarkable 15-point lead over runners-up Bayer Leverkusen. Hitzfeld was a proven winner, having delivered a couple of league titles as well as the Champions League with Borussia Dortmund.

And things were going to plan in Barcelona. Mario Basler gave them the lead after 25 minutes with a 25-yard free-kick that bamboozled Peter Schmeichel. They were pushed back but looked sturdy in defence as Alexander Zickler and Carsten Jancker missed chances to put the game to bed on the counter. Lothar Matthäus, Stefan Effenberg and Oliver Kahn looked like European champions.

But then injury time happened. United scored twice in two minutes and everything was lost. Bayern could almost touch their place in history before it was so cruelly snatched away – instead of glory, the defining image of that team would be of Samuel Kouffour punching the turf in visceral, hopeless rage.

Broken, they then lost the DFB Pokal final to a vastly inferior Werder Bremen a couple of weeks later.

With Zinedine Zidane suffering something of a World Cup hangover and Alessandro Del Piero afflicted by a long-term knee injury, Juventus went through a nightmare campaign, unthinkably going on to finish seventh in Serie A after winning three of the previous four Serie A titles.

But, often like Real Madrid, a winning muscle memory had kicked in for the European games and they navigated the group stage – coming out narrowly on top over Rosenborg, Galatasaray and Athletic Bilbao.

Marcello Lippi, who quit due to poor results in the February of that season, was replaced by Ancelotti in his first top-level job. Under his guidance, the Old Lady kept on course and dispatched Olympiakos 3-2 on aggregate in the quarter-final.

After drawing 1-1 at Old Trafford in the first leg of the semi, it looked like Pippo Inzaghi’s early brace in Turin had booked their place in a fourth straight final. But as had been a surprising theme that season, their defence buckled as the Red Devils fought back to win 3-2 on the night.

Ancelotti has endured a frosty relationship with the Juventus fans ever since. “A pig cannot coach. Go away, Ancelotti,” read a banner on the opening day of the following season, and Lippi would eventually come back to replace him in 2001.

But he has long since validated his place at the top, winning 10 major honours – including three Champions Leagues – across four countries.

The eventual winners got the dramatic ending that the competition deserved.

Ferguson arguably crafted better, more complete teams – but the Treble winners of 1999 had an intoxicating mix of fierce character, a will to win and a penchant for special, decisive moments that’s hard to beat.

The Scot had conquered the English game in the early years of the Premier League, winning five of the first seven titles. But United were continually undone in Europe, every year learning lessons that would prove invaluable come 1999.

Beating Juventus – so consistently that bit smarter, sharper, better than United throughout the 90s – in the semi-final had a symbolic significance for Ferguson’s team.

It meant they’d start the final as genuine European heavyweights. Roy Keane’s performance at the Delle Alpi as United battled back to beat Juventus 3-2 is the stuff of legend, but they did it all again without him against Bayern.

History is written by the victors, and there’s certainly no lack of eulogies for that side. There’s no greater accolade than coming out on top of that final four.