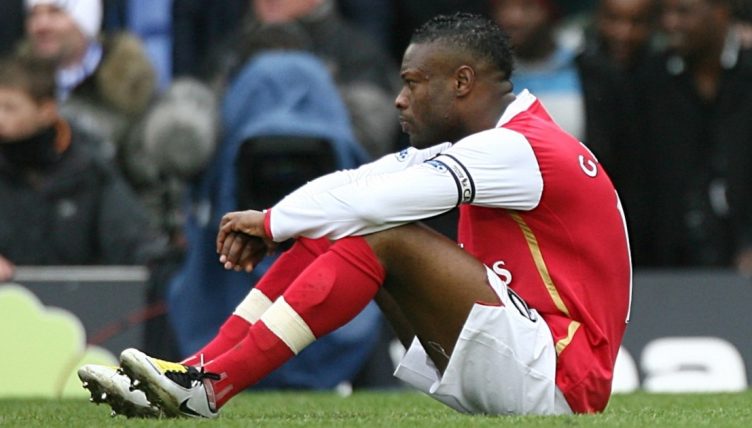 Arsenal’s trip to face Birmingham City at St. Andrew’s in 2008 is something they aren’t likely to forget, no matter how much they want to.

The first reason is Eduardo da Silva’s horrifying injury suffered after a tackle from Martin Taylor just two minutes into proceedings. Even with that terrible event, things could have been so different on the pitch, as a baby-faced Theo Walcott had overturned a single-goal deficit with a well-taken brace.

All of that work unraveled in the final moments, though, as Gael Clichy completely lost his bearings to gift Stuart Parnaby the ball and then fouled him to concede a penalty that James McFadden converted.

It’s at this moment that everything got too much for Gallas, wearing the captain’s armband and No.10 shirt, as he lost control and started lashing out at the advertising boards.

The Frenchman’s composure didn’t return after the final whistle. As everybody else trudged in, he sat on the turf and looked on in complete dismay with a face like thunder.

After telling someone to “leave me alone” when they tried to help him up, Gallas finally rose when Arsene Wenger came to get him, but even the Gunners boss got an earful.

After the world had watched on in laughter, Gallas himself was able to see what was wrong looking back, telling Ladbrokes: “I was probably one of the older players in the dressing room so I naturally became a leader in that team and I tried my best.

“Unfortunately it didn’t happen exactly how I wanted it to all of the time, in particular the game against Birmingham City springs to mind, but I don’t like to talk about that day.

“I was really passionate, and maybe sometimes that passion went too far. Sometimes it helped me and sometimes it didn’t.”

William Gallas' sitting on the pitch and refusing to leave at full-time is one of the maddest moments during Wenger's reign pic.twitter.com/igM3uN6cjb

In truth, the Frenchman’s flamboyance and passion seemed to be a hindrance far more often than it helped him during his four-year stint at Arsenal – while that St Andrew’s strop was the most memorable moment, it was just one from Gallas’ period of chaos in North London.

This starts from his very arrival at the Emirates, as Gallas joined in 2006 as part of the swap deal that saw Ashley Cole – or Cashley as Gunners fans called him for years – head to Chelsea.

The Blues had accused Gallas of threatening to score own goals if he wasn’t allowed to leave, but even that didn’t do much to take attention away from the anger felt towards Cole.

Gallas had more up his sleeve, though, becoming the first player to wear Arsenal’s No.10 shirt since Dennis Bergkamp. ‘Why was the great Dutchman’s number allowed to go to a centre-back?’ we hear you ask.

Well, Wenger explained: “Number three was uncomfortable for [Gallas] and I had given the rest of the numbers out. In the end, I thought it might be a good idea to give the number 10 to a defender because a striker would suffer a lot with the comparison with Dennis.

“At first I was reluctant to give Dennis’ number out, and especially to a defender, but overall I think it’s better that way.”

We’re just wondering how long it took the Gunners boss to realise that he should have stuck with his gut, but that stage presumably came after he’d handed Gallas the captain’s armband less than a year after his arrival.

“We had learned of his appointment in the papers and we all shook our heads,” Jens Lehmann stated in his autobiography. “The previous season he had repeatedly turned up very late for training or had left the training ground without permission.

“With the promotion, Wenger apparently wanted to appeal to Gallas’s sense of responsibility, trying to turn him from Saul to Paul.”

There were good moments for Gallas, especially heading home the winner against Chelsea, but that fiasco in Birmingham left his position as captain in question less than a season into his tenure.

Surprisingly, the defender stayed in his post after Wenger said he’d review it at the season’s end. Even more surprisingly, it seemed as though it would work.

He started living up to that shirt number too, scoring six goals in all competitions, including three in the Champions League and Arsenal’s second in the breathtaking 4-4 North London Derby draw.

However, that hope came crashing down after an interview in which Gallas made various criticisms of the team, including the comment: “We are not brave enough in battle. I think we need to be soldiers. To be champions, you have to play big matches every weekend and fight.”

He was left out of the squad for Arsenal’s next game, which came against Manchester City, and eventually stripped of the captaincy to be replaced by Cesc Fabregas. 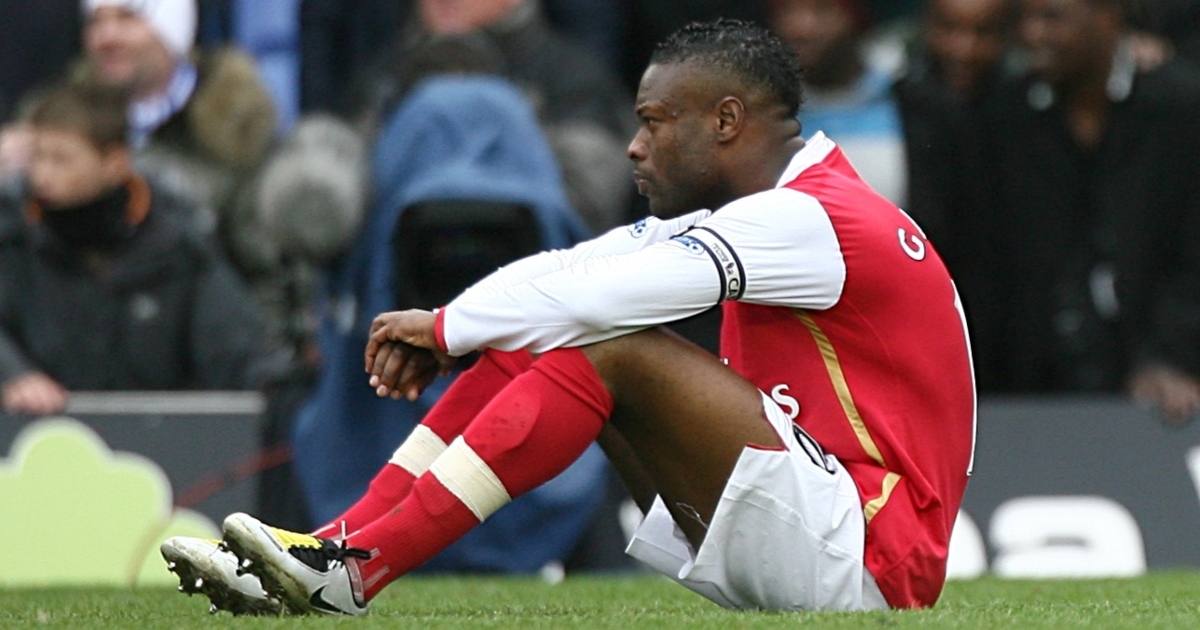 While injury ended Gallas’ 2008-09 campaign, there was to be another momentary resurrection as the following season started with Gallas and Thomas Vermaelen striking up a partnership at both ends of the pitch.

The Frenchman and Belgian returned seven goals in the opening eight games between them with one from Gallas benefitting from a massive slice of luck, as Vermaelen’s volley struck him before bouncing up against his face and into the net.

Of course, there was also controversy around Gallas that day, after he had manhandled John Utaka who was through on goal as the referee waved play on.

“An amazing decision,” Pompey manager Paul Hart exclaimed. “It was a clear foul and although I don’t want to see people sent off the rules of the game are there. Then Gallas scored their third goal. I think that’s cruel.”

A season can feel like a long time, and while this one had started positively for the Frenchman, it ended with his Arsenal departure.

He’d made it to 100 appearances during a 2-0 loss against Chelsea (obviously it was against them), but suffered an injury-hit season, with his final Gunners appearance being cut short as he was stretchered off against Barcelona.

After a contract extension couldn’t be agreed upon, Gallas left Arsenal as a free agent and almost as if he was trying to continue the chaos, went and joined Tottenham Hotspur – making him the first man to have played for Chelsea, Arsenal and Spurs.

It would be wrong to suggest that Gallas’ time in red and white was always bad, but it’s pretty obvious that it wasn’t all grand. One thing you can say for him, though; it was never bland.

READ NEXT: Gilberto Silva discusses career highs and Arsenal’s failure to replace him