Youri Djorkaeff won the World Cup, European Championship and UEFA Cup during his career. But his spell at Bolton Wanderers is equally worthy of celebration…

Somewhere in early-2000s Lancashire, a charming Frenchman begins an awkward conversation over his first ever roast dinner.

Asking the waitress for wine recommendations, he struggles to get his head around the idea that the options are just ‘red’ or ‘white.

We hear a record scratch as the frame freezes on his piercing eyes and slightly receding hairline.

When people talk about Sam Allardyce’s entertainers at Bolton Wanderers, Jay-Jay Okocha’s name is usually the first to come to mind, and rightly so.

However, there’s every chance the Nigerian would have never even crossed the channel were it not for another former Paris Saint-Germain star having kept the Trotters in the Premier League in the first place. 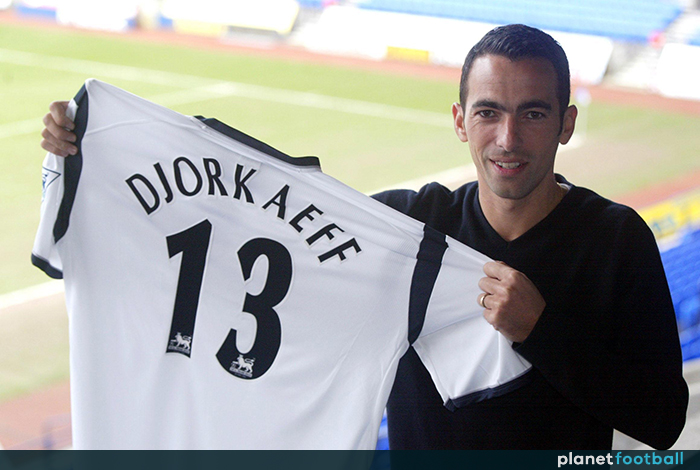 Youri Djorkaeff was one of the first members of Sam Allardyce’s Allacticos, a descriptor which I have literally made up just there.

The France international arrived in February 2002, shortly after Germany’s Fredi Bobic – scorer of Bolton’s first and only Premier League hat-trick – touched down at the Reebok Stadium.

A veteran of the victorious 1998 World Cup and Euro 2000 squads, Djorkaeff was fresh from leading Kaiserslautern – Kaiserslautern! – to a UEFA Cup semi-final a few months prior.

His move from an established-if-unglamorous Bundesliga club might have been surprising enough, but Djorkaeff’s spell with a very good Inter side a few years prior was more than enough to excite supporters who 12 months earlier were turning to a 32-year-old Dean Holdsworth for goals.

Holdsworth was the big-money signing of Bolton’s previous top-flight campaign in 1997-98, along with the likes of Robbie Elliott and Mark Fish, so to see a man capable of doing this would have been enough to get any set of fans buzzing.

24 years ago today Youri Djorkaeff had the perfect opportunity to get the ball back in the mixer… and gave it a bit of Van Basten instead.

If any goal deserves to be played on loop from multiple angles over a Europop soundtrack, it’s this one.

The crescendo building as Maurizio Ganz’s first effort draws an unconvincing save from the opposition keeper, gathering pace as the Roma defender slices the ball more up than out before the beat drops as Djorkaeff rises and sends the ball flying into the back of the net in one fluid motion.

It’s the sort of goal that deserves confetti, despite coming in the middle of a league game.

To call it a bicycle kick would be a misnomer, it’s more like a rhythmic gymnastics kick.

It’s the shot you think about attempting for your Sunday League team, only to end up only half-committing to it and pulling your groin in the process.

It’s football’s equivalent of that summer camp game of trust, where you fall backwards and wait for your partner to catch you, except your partner is the turf and the only thing you’re trusting it to do is not break your fucking hip when you land.

It makes sense for Okocha to have stolen the headlines within that Bolton squad. For starters, his impact was longer-lasting, while his infectious smile at least felt more expressive than the more subdued reactions of Djorkaeff.

But that’s not to say Djorkaeff didn’t deliver comparable flair, and comparable Hollywood finishes to the Nigerian. Indeed he even managed – just a couple of months shy of his 35th birthday – to replicate the acrobatic majesty of that stand-out Inter goal.

To suggest this effort is *better* than the one that preceded it would be to make false comparisons, but there’s something eminently watchable about this goal against Charlton Athletic, which played a part in keeping Bolton afloat by the skin of their teeth for a second successive season.

As with the goal against Roma, what makes this so special is the contrast from what came before.

In Italy, we had the suspect defending and goalkeeping. In the good old Premier League it was one of those displays of headers-and-volleys so fluid you wonder if it’s a next-level display of skill, before remembering who the manager is.

And then the finish…oh, the finish. A man in the middle of an eight-game goalless run should not have these instincts. If we’re being honest, no one should have those instincts.

It’s football’s equivalent of the tennis hotdog, letting muscle memory take over and, in the process, making a mockery of all those players so basic they have to look where they’re trying to put the ball.

This sort of goal goes against the natural trade-off: you should normally only reach that level of instinct when you’re in the twilight of your career, by which point your body is in no shape for such acrobatics.

I’m not sure what kind of deal with the devil Djorkaeff performed in order for these things to coincide, but I want the details.

For most players, that would be enough. They’d wind down their career safe in the knowledge they’d already made history by playing their part in a French World Cup win, and in a French European Championships triumph. And in back-to-back skin-of-the-teeth escapes with Bolton.

That would be plenty for most, but not for Djorkaeff. Why do that when you can make history one last time? After a career full of firsts, he had time for one more.

On April 2, 2006, at the age of 38, Djorkaeff took to the field at the RFK Stadium in Washington DC to take part in the first ever game played by the rebranded New York Red Bulls.

READ NEXT: Remembering Fernando Hierro at Bolton: A class act even at 37

TRY A QUIZ: Can you name all 12 clubs Sam Allardyce has managed in his career?