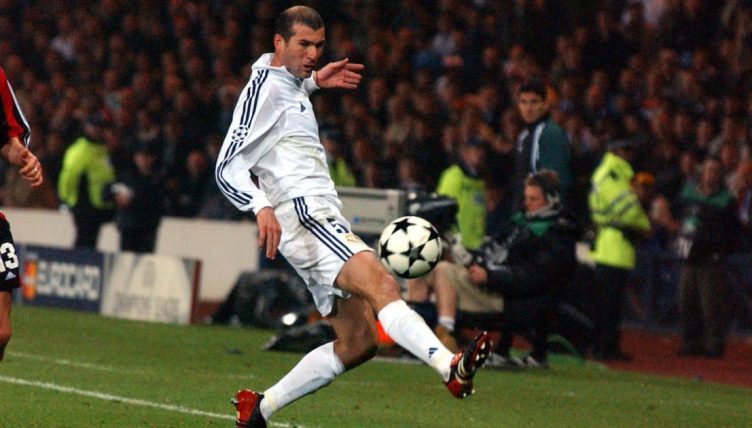 For a couple of Zinedine Zidane’s five seasons at Real Madrid, the main camera angle for the coverage of the Spanish giant’s home games made the French midfielder look like he had gone for a trim with a picture of Friar Tuck in his hand, looked at the barber and asked, “One of those please, mate.”

It was the in-between time; after his bald patch had moved unforgivingly towards full-on baldness, but before he had embraced the shaven look that currently complements his intimidatingly sartorial air.

With the camera perched up in the rafters of the Santiago, the hair he still possessed around the sides of his head gave him the look of a man who had chosen to forego worldly pleasures and commit his life to the service of God.

He had not shut himself away in a rural monastery, fortunately for us, but the ecclesiastical hairstyle was appropriate. For Zizou had dedicated himself to mastering the holiest of arts: the first touch.

So immaculate was Zidane’s touch that he appeared to have had his shiny cranium blessed by a supernatural being, handing him a mystical power unavailable to the mortals that surrounded him. He was the embodiment of the sacred walking among football’s more profane practitioners.

And if Zidane’s touch is what set him apart from the rest, then the point stands more broadly. How a player controls a football is always telling.

A mazy dribble may be more exciting, a rasping shot more explosive, a perfectly-timed tackle more fist-pumpingly invigorating. But there is nothing more graceful and pure than watching someone pluck a booming pass from the sky and caress the ball lovingly onto the grass ahead.

When you see a player do it with panache, you can’t help but think: we’ve got ourselves a special one here.

Zidane, by the time his hair had reached the Friar Tuck stage, did not need to convince anyone that he was special. He had won the World Cup and the Euros with France, he had won the Champions League and La Liga with Madrid and two Scudetti with Juventus. The whole world knew.

But he kept it up anyway, producing a new, magnificent, velvet touch from another angle or with another part of his anatomy in every game, to challenge his own limits and drive home to us just how peerless he was.

He brought it down with head, shoulders and chest. He could cushion it on a thigh or a hip. He could cast a spell on the ball with instep, heel, toe and studs.

“Every area three yards around Zidane, you could give him the ball where you wanted. He puts it down and plays.” – Arsene Wenger

The frequency with which he performed first-touch magic was alarming and videos of his tricks abound in this age of YouTube compilations, allowing us to marvel at the full range of his supreme ability. Still, there a few individual bits of control that stand out above the others.

The most famous, perhaps, came in a France shirt in a game against Denmark in 2001. It was a friendly, but that did not stop the France captain from putting on a masterclass. And in the second half, he produced a moment that we are still talking about a full two decades later.

You’ve likely seen it before, but it’s always worth going over again. Fabian Barthez threw the ball overarm from inside his area, Zidane ran to get on the end of it 10 yards inside his own half, facing the touchline and relatively closely pursued by a Danish defender.

Then from nowhere, he touched it behind his standing leg with the inside of his Predators and span back in the direction he came from, head perfectly still, balance never in question. The footage of the moment is a five-second portrait of the French midfield ruler at his imperial best.

There are other snapshots that stick out too. How about the cushioned outside-of-the-boot flick followed by a little bit of keepy-uppy while being pursued by Ballon d’Or winner and Barcelona player Rivaldo during a Clasico at Camp Nou? No pressure, Zizou.

“He dominates the ball, he is a walking spectacle and he plays as if he had silk gloves on each foot.” – Alfredo di Stefano

Or what of the balletic spinning chest control for France in their game with Portugal at Euro 2000? It came when Zidane was at the absolute peak of his powers, not only producing moments of aesthetic beauty but dragging his clubs and country to final after final and filling another few spaces in his own trophy cabinet with every passing season.

For those who do not recall it immediately, Emmanuel Petit sprayed a raking pass to Zidane, who was on the edge of the Portuguese penalty area.

Zidane somehow managed to take it over his shoulder and control it on his chest, while spinning 180 degrees and never losing sight of the ball, before another touch out of his feet with the outside of that magical right foot.

Zinedine Zidane vs Portugal, Euro 2000.What a performance! pic.twitter.com/85JM9qwbLM

While all those moments were special, there is a different clip that perhaps encapsulates better than any of the others just why Zidane’s control was so special. It is one that does pop up in those videos (it starts at 00:23 in the clip below) but is often framed as an afterthought, wedged between the rest as filler.

But its content is instructive. With Zidane, it was not just the unsullied technique, but the prescience and imagination that guided it.

On a Champions League night in the 2002-03 season, playing against Borussia Dortmund in Madrid’s brilliant white centenary kit without the now-customary fabricator’s stripes down the arm, Zidane watched as a ball was pumped into the air.

“He was as elegant as a dancer – he even used the soles of his boots efficiently. Everything was easy for him; he made such movements that if I tried to copy them I would break my legs.” – Franco Baresi

It went so high that as it fell back towards earth, it looked like it may as well have been dropped from a plane.

Zidane was positioned 12 yards outside his team’s penalty area and facing his own goal. There were two Dortmund players closing him down, one to his right and one just behind him.

And as they came and the ball plummeted, Zidane swivelled his torso clockwise to show that he was going to touch it down and turn in that direction.

Of course, Zizou, like a chess grandmaster, was already two moves ahead of his opponents.

As the two markers went to his right, fooled by the position of his body, he touched it to the left with the inside of his right boot. He span back, anti-clockwise with the grace of a figure skater and, having half a second prior been in the tightest of spots, suddenly found himself in acres with the pitch opening up ahead.

“I think he was born with a ball at his feet. I think when the doctor pulled him out, he said, ‘This is weird, there is a ball here!’” – Emmanuel Petit

It was a moment that encapsulated the full package – awareness, 360-degree vision, composure, daring, technique. It remains a clip that sums up Zidane’s divine brilliance.

The commentator greets the touch with an instinctive shout of, ‘Madre mia!’

We couldn’t have put it better ourselves.