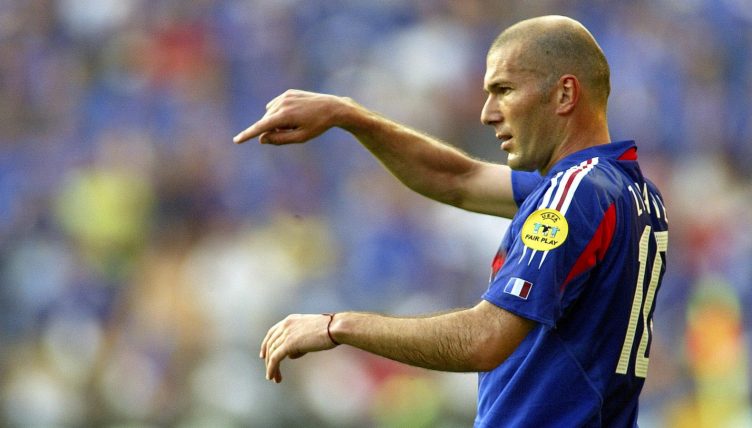 Perfection is a nebulous concept that millions of human beings have spent their whole lives failing to achieve.

The wiser members of our species recognise that life is essentially a collection of random moments that are given meaning and investment by people to convince themselves that our existence is anything other than futile.

Other humans are tragically lacking in such self-awareness or, more likely, wrapped up in their own self-importance. Industries pray on this insecurity, offering material products and limited ideas on the basis of a lie that perfection is within our grasp.

Football, acting as a sponge for hopes and neuroses around the world, is not exempt from such ideas. That said, we can surely all agree that Zinedine Zidane was inches away from providing the most perfect assist of all time at Euro 2004.

The sleepy Portuguese city of Leiria was the setting for Zidane’s most-convincing entry into the pantheon of human achievement.

Fresh from scoring two late – and hilarious – goals against England’s Golden Generation, the lynchpin of French football set about Croatia with assured grace.

Having scored the opening goal from a whipped free-kick, with the Croatian defence left staring at his sheer baldness with awe-struck deference, France started toying with their opponents like a cat delaying its pounce on a helpless mouse for shits and giggles.

Thierry Henry – never a slave to convention himself – was Zidane’s partner in crime for their crowning ridiculousness. Lining up an injury-time corner, Henry assessed a crowded penalty area before choosing to stroke a mole-murdering pass to his captain.

Left bafflingly unmarked by a Croatian defence begging for trouble, Zidane rotated his body away from goal and produced the most piss-taking flick into the danger zone.

For missing the following header, William Gallas should have immediately left the field and announced his retirement before committing to himself to a lifetime of penance for his crime.

Let’s forgive Gallas for a second though; in the blink of an eye, Zidane was responsible for an epidemic of dropped jaws and incredulous giggles across a bewitched continent.

Even Mark Lawrenson produced something close to a coo on the BBC commentary. An unsettling, if understandable, reaction to witnessing a moment of genius.

For all his unquestionable greatness, Zidane was always something of an enigma. A worldwide celebrity for sure, but one with the energy of the most conflicted of human types; the shy show-off.

In an era where stats are padded and the criteria for greatness has become more binary, the Frenchman was never one to bully the weaklings of La Liga to fluff his own ego.

Instead, he relied upon impeccable ball control and an unerring sense of theatre to write himself into folklore.

From his headed double in the 1998 World Cup final, to his volley that won the Champions League in 2002 and twatting Marco Materazzi, Zizou created an aura that will forever be out of Elon Musk’s price range.

And, by coming inches away from providing the perfect assist of all time, Zidane served to remind us that he was human. And imperfect.

READ NEXT: Zidane & the forgotten Madrid goal so good even Magic Johnson rejoiced