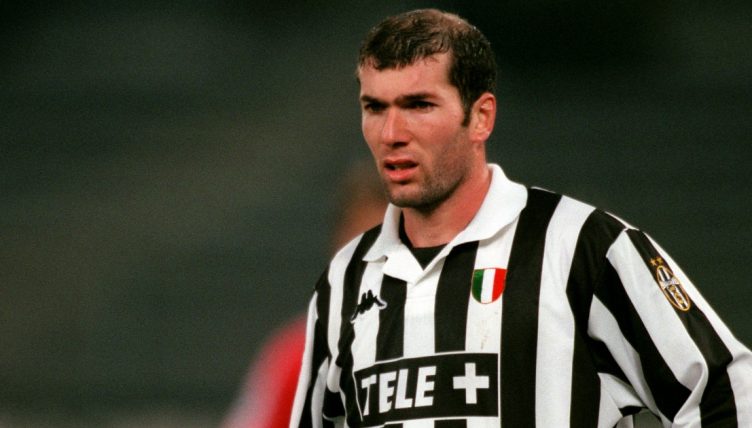 Everybody has their favourite, be it one of their own team’s or someone they grew up watching and trying to emulate in the playground.

Trying to list the best from any era is, of course, entirely subjective, but here are 10 of my favourites from the 1990s…

A former Yugoslavia international with 56 caps over 13 years, Savicevic was born in what is now Podgorica, the capital of Montenegro. He has been the head of the Montenegrin FA for 16 years.

Yet during his playing career, Savicevic made his name at Serbia’s Red Star Belgrade, where he won the 1991 European Cup in that famous cult team.

That earned Savicevic a move to Milan in 1992, where he would stay until the age of 32. He won three Serie A titles and the Champions League in 1994, playing off Daniele Massaro to link play between midfield and attack.

George Weah, Didier Drogba and Samuel Eto’o may make their own cases, but Abedi Pele might just be the greatest African footballer of all time.

Named as Man of the Match in the Champions League final in 1993 having been a losing finalist in 1991, Pele was the playmaker around some wonderful attacking players in those Marseille teams: Rudi Voller, Alen Boksic, Chris Waddle, Jean-Pierre Papin and Eric Cantona.

First winning the African Cup of Nations in 1982, Pele would eventually captain Ghana until his international retirement in 1998. He was named African Footballer of the Year in three consecutive years at the start of the 1990s.

“If this lad makes it as a professional footballer, I’ll eat my coaching certificate” – the now infamous words of Miroslav Blazevic, Prosinecki’s first coach at Dinamo Zagreb.

Blazevic’s prediction was way off-kilter, but he was not criticising Prosinecki’s ability but his temperament. He was a playmaker and playboy, a chain-smoking genius and a magician with a football.

It is no coincidence that Prosinecki was part of more than one cult team, for he had enough swagger to share around the rest of a squad.

Having won three league titles, the European Cup and been named the best young player at the 1990 World Cup at Red Star Belgrade, Prosinecki also finished fourth in World Player of the Year in 1991.

He then joined Real Madrid, where he stayed for three seasons, and Barcelona, where he managed only one.

Yet arguably the lasting memory of him is in that effortlessly cool Croatia shirt during their wonderful World Cup in 1998. With Zvonimir Boban and Davor Suker around him, how could you not fall in love?

The line between second striker and playmaker has become increasingly blurred over the last 20-30 years, but I’m still having Bergkamp in my list of playmakers.

If the vague rule of thumb is that you judge a playmaker by what they create as much and how they create it as much as what they finish off (and I’ve just made up that rule on the hoof), he’s a shoo-in.

Bergkamp was many things to Arsenal, but he should be remembered most as the player who ensured Arsene Wenger’s success. Having already embraced and benefited from concepts such as nutrition and individual training regimes in Serie A, Bergkamp was in the perfect position to spread that gospel to his Arsenal team-mates.

He was sensationally gifted and skilful, but it was all achieved through practice and commitment to his art.

“Everything had to be perfect, even in training. Everything at one hundred percent. He’s a very funny guy, but when he was working there was no joking,” recalls Thierry Henry.

“I believe Dennis was one of those who had such a high idea of the game that he wanted that to be above everything,” Wenger says. At Highbury, he achieved exactly that status. 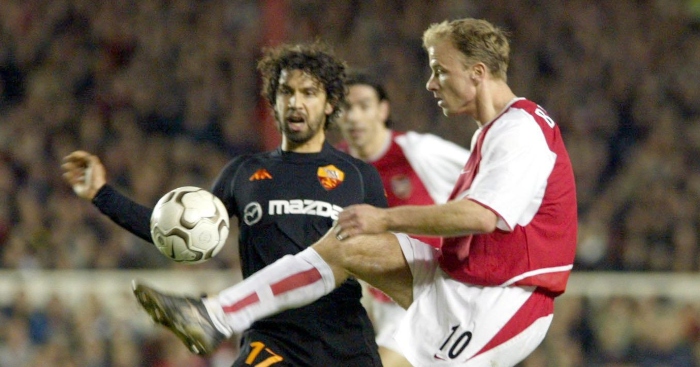 The archetypal flair player must tick a number of boxes:

– Capable of beautiful goals and skill

– Equally capable of producing neither of those, and contributing very little

And so you have Rui Costa, never consistent but always capable of the sublime and therefore eminently watchable. His best years in Milan may have come after the end of the 1990s, but his time in that Fiorentina team wearing that Fiorentina kit is justification enough for his inclusion.

The tearjerker. Gascoigne was a superlative playmaker, potentially England’s most skilful player, but by the end of the 1990s his career and life was already being torn apart by the effects of immaturity combined with addiction.

Having shone in the 1990 World Cup, Gazza joined Lazio in 1992 and never quite settled in Italy, putting on weight and regularly picking up injuries. Yet he enjoyed Indian summers both in Glasgow, at Rangers, and in an England shirt during 1996.

Gascoigne scored 27 league goals in his first two seasons in Scotland, his ability masking a slide into disrepair and disrepute from which he would never recover.

We can enjoy watching back the moments of brilliance on film, but not without a nagging sense of collective regret.

Volatile, outspoken, controversial and supremely talented, it is no wonder that Gheorghe Hagi is nicknamed the ‘Maradona of the Carpathians’.

The Romanian was less consistent than his Argentinian counterpart but no less capable of making your jaw drop. You can forgive inconsistency in a player that possessed the most wonderful passing ability and vision.

Yet, like Maradona, Hagi was capable of leadership through on-pitch example if not off-field personality.

He took Romania to the verge of the World Cup semi-final in 1994, exceptional throughout the tournament as they knocked out USA, Columbia and Argentina. Defeat on penalties to Sweden came after a late extra-time equaliser.

“Hagi could have been the best player in the world after Maradona,” Romania coach Mircea Lucescu said before that tournament. “But he is a great player without a work ethic.”

That might frustrate coaches and team-mates alike, but it fails to erode any of Hagi’s majesty for the rest of us.

It is unfair to remember a player only for one great moment after a career of achievement, but to do so for their greatest mistake is infinitely harsher. Roberto Baggio may be the player who cost Italy the 1994 World Cup with his abysmal penalty, but Il Divin Codino deserves far better than that reputation.

Baggio might well be one of the most underrated players of the last 30 years, or at least now too easily overlooked. He scored 220 league goals during a career decimated by injury.

In his autobiography, Baggio describes how he was only ever fully fit for two or three games per season. He was a warrior as much as an artist, but able to blend those two opposing ideals.

Baggio was arguably Italy’s greatest ever player but one whose defining image is associated with failure. The country’s most prolific penalty scorer, known most famously for missing one.

Or maybe it is Laudrup who is most under-appreciated. Between 1989 and 1996, Denmark’s greatest ever player was Europe’s finest footballer. Yet not only did he fail to win a Ballon d’Or, he never even made the top three.

By the start of the 1990s, Laudrup had already earned 58 caps for his country (and scored 23 times), won a Serie A title with Juventus and twice been named Danish Player of the Year.

The decade would start with four straight consecutive La Liga titles at Barcelona before he jumped ship to Real Madrid and promptly won the title there too. The only regret was missing out on Euro ‘92 with Denmark.

Despite playing only 62 league games for Real Madrid, in 2002 Laudrup was voted the 12th best player in the club’s history. In 1999 he was awarded the title of Spanish football’s best foreign player of the last 25 years. Take that, Johan Cruyff. 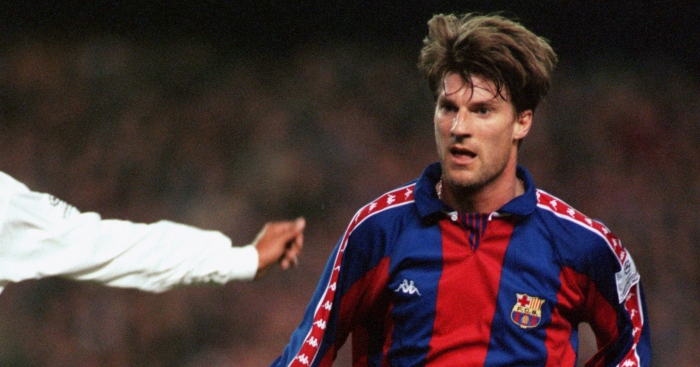 READ: ‘I won 10-0’: When Michael Laudrup ruled El Clasico for Barca and Real

There is a theory called recency bias, which proposes that too much weight is placed on recent events, thus overestimating their importance in the context of history.

Yet in football, the opposite often occurs. We are hardwired to assume that the stars of the 1960s, 1970s and 1980s, those pantheons of the game, are forever destined to stand above anything that follows.

It is nonsense, of course. Lionel Messi and Cristiano Ronaldo’s goal records and consistency alone dictate that both must be considered as two of the five best players to have ever lived. Perhaps in 20 years, we will truly give Zidane due deference.

A fair proportion of Zidane’s success came towards the end of 1990s and beyond, including the World Cup, Euro 2000 and his entire spell in Madrid, yet there is plenty to work with.

Not least was Zidane’s sensational World Cup in France, when he was named Man of the Match in the final, FIFA World Player of the Year and Ballon d’Or winner.

“He is a special player,” said Juventus team-mate Edgar Davids in 1997. “He creates space where there is none. No matter where he gets the ball or how it comes to him, he can get out of trouble.”