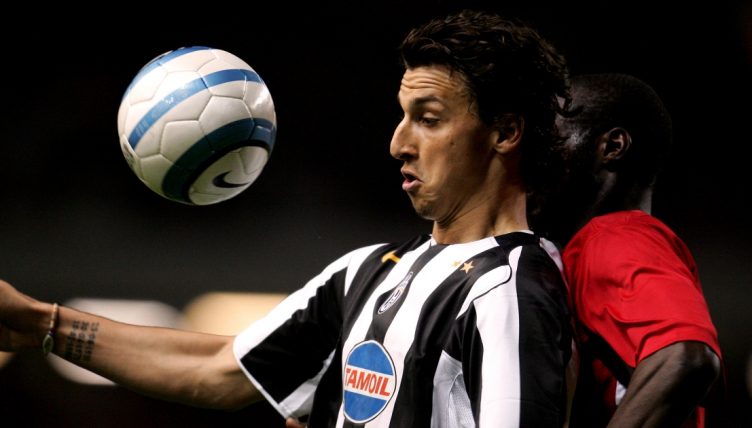 Two of Zlatan Ibrahimovic’s former clubs are facing off in the Champions League, reminding us of a very different period for the Swedish striker.

The sight of Malmo and Juventus in the same European group can only ever summon up memories of Zlatan Ibrahimovic, despite the fact that 15 years have passed since he played football for either team.

As he approaches his 40th birthday, the veteran has added more than 500 appearances and more than 400 goals to his CV, and is back in Champions League action himself with AC Milan this term. However, his career could easily have gone down a different path.

It seems strange now, but Ibrahimovic didn’t score his first club hat-trick until April 2005, having failed to do so with either Malmo or Ajax.

Yes, there was a four-goal haul for Sweden against Malta a few months prior, but the treble against Lecce, at the age of 23, was decisive and varied enough to make you wonder what took him so long.

The first goal, in particular, points to a player whose only excuse for not scoring a hat-trick before this game was that he simply didn’t feel like it yet.

The way he rolls the ball forward with the sole of his boots is his way of saying, ‘Now? You want me to score now? No, I’m going to make you wait an extra second, just because I feel like it.’

It’s the act of a man who has grown up being the most important person on the pitch, building his own mythology in a more improvisational way before he worked out the best and most efficient way to do it. It is Zlatan figuring out what Zlatan is going to be.

If the first goal represented the young and cocky Ibrahimovic, the second and third incorporated the more clinical version who we saw more of as he grew older.

When you’re in your early twenties, time can stretch out forever, with ‘the end’ pitched out as this nebulous moment in the distant future, but this changes when you approach the age at which some of your contemporaries begin to leave the game.

In Ibrahimovic’s case, though, things are far less linear: there’s a different kind of immature swagger to his older years, even amidst the more clinical goalscoring, just as we saw shades of simplicity in that first season in Turin.

With both the second and the third goal, you’re given moments of, ‘Actually, yeah, why should I wait a second longer?’ – and at no moment is there a suggestion he’s chosen an option because it’s the only one he is capable of taking.

It’s a real trick to give the impression of picking up the ball and running it back to the centre-circle before you’ve even taken a shot, but this is what you’re seeing with goal number two.

As for the hat-trick effort, you have a man deciding to score a different kind of goal, simply because he hasn’t done it yet today.

It’s fitting that the shirt colours give the pitch the air of a pool table, even if it’s the man in black dominating the red-and-yellow from start to finish.

He’s the hustler nominating a pocket for the eight-ball while there are still two reds on the table, and knowing he’ll still have the angle to put it away when the moment comes.

While Ibrahimovic’s second season at Juventus was far less prolific than the first, that doesn’t change the fact that the summer of 2006 represents a fork in the road for the Swede.

The Calciopoli scandal saw Juve drop down to Serie B and, while others stuck around to bring the Bianconeri back to the top-flight (and in many cases cement their status as club heroes), Ibrahimovic was not one of that number.

You can’t really say he made the wrong call, given the hugely successful decade and a half which followed, but part of us wonders what his legacy looks like if, instead of moving to Inter that summer, he stayed in Piedmont.

Would we still have ended up with the myth-making behemoth he developed into since 2006, or would a longer spell with Juventus have given us a more rounded individual, given an extra layer of humility from a season spent dragging a team back to the heights it once occupied?

Would a year or two without a title have given him different priorities, or did the titles follow him around rather than vice-versa?

We will never be certain of what might have ensued, but the sight of a young Zlatan beginning to create his legacy as a superstar is enough to remind you that different pathways may well have been possible.