There’s more football on TV than ever before these days, but we can’t help but miss the sheer ludicrousness of some of these shows from the 1990s.

If you were a kid in the 90s, you’ll undoubtedly have some wonderful memories of several of the TV shows broadcast during the decade.

But it was also a great time for the adults as the rise of satellite TV helped inspire a proliferation of football onto our screens. We gave you the chance to vote for your favourite, and here is the outcome…

It’s fair to say its popularity has dipped, but when Soccer AM first launched in the mid-90s it was genuinely must-watch Saturday morning TV – if very much of its time.

As you might expect, Peter Reid’s motivational techniques are a little more old school than Brendan’s, and definitely NSFW…

Aired between 1993 and 1997 on ITV, The Hurricanes was a cartoon based on a team named, er, The Hurricanes, who were owned by a 16-year-old girl and coached by a Scottish manager named Jock Stone, who may or may not have been based around a legendary former Celtic boss.

Renford Rejects was a kids’ sitcom on Nikelodeon based around the exploits of five-a-side school football team made up of players who failed to make proper school team. 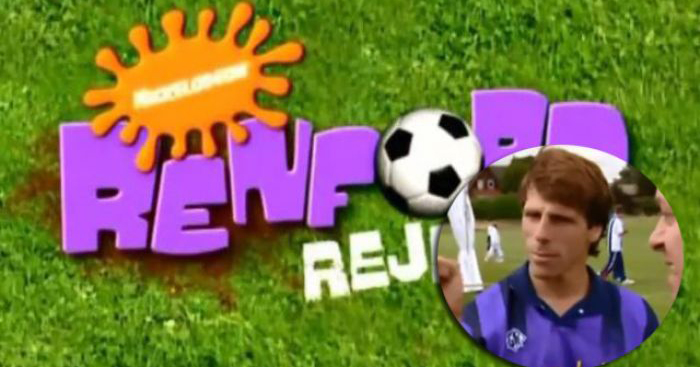 READ: A celebration of Renford Rejects, one of the best kids shows of all time

Saint & Greavsie, hosted by Ian St John and Jimmy Greaves, aired on a Saturday lunchtime from 1985 until the final broadcast in June 1992 from the European Championships in Sweden.

The most surreal segment, in hindsight at least, came in 1994 when Donald Trump helped perform the draw for the League Cup semi-finals.

With the top-flight football not available on terrestrial TV from 1992, Channel 4 looked to fill the void by paying £1.5million to acquire the rights to live Serie A action. It was a huge success, as was the Saturday morning highlights show, Gazzetta Football Italia.

Running between September 1991 and May 1994, Standing Room Only was the first magazine show aimed at a younger audience, with a more informal style and approach. It was brilliant.

MOTD is still going today, of course, but it was never better than in the 90s with Gary Lineker, Des Lynam and Alan Hansen.

Dream Team focused on Harchester United, who were promoted to the Premier League under Big Ron; won the FA Cup but had their captain shot dead as they celebrated at Wembley; lost four first-team members in plane crash; another three in a bus crash; achieved Champions League qualification and were taken hostage by their own goalkeeper, who was later shot dead by armed police… and that’s without giving away half the drama.

For two and a half years, between 1994 and 1996, Fantasy Football League was compulsory Friday night viewing.

Nottingham Forest striker Jason Lee was perhaps among the few people happy to see the back of the regular series.

We recently tested students on their knowledge of 90s football shows, and it’s safe to say they left a lot to be desired…