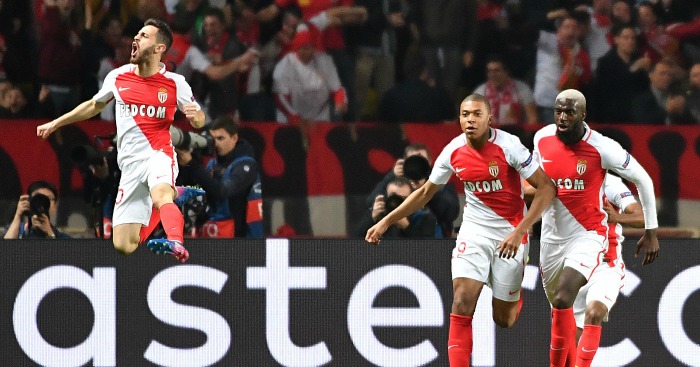 Monaco could earn more money from transfer fees this season than any other club in the history of the game.

Monaco have already sold Benjamin Mendy, Bernardo Silva and Tiemoué Bakayoko this summer – and with several players still linked with transfers, they look on course to set a new record for money recouped in a single season.

Here are the rest of the top 10, according to transfermarkt.co.uk.

Given the at times ludicrously high level of player turnover in Italy, it’s quite fitting that a Serie A outfit kicks off this list.

Throughout 2013-14, a total of 16 players left Roma for a transfer or loan fee, with Marquinhos, Erik Lamela and Bojan Krkic among those departing. Our favourite without a doubt is Dani Osvaldo, the big, mad rock star.

Real Madrid are traditionally renowned as one of the biggest spending clubs in world football, but they have bucked the trend in recent years.

This summer has seen only the arrival of promising young players Theo Hernandez and Dani Ceballos, while the big-money sales of Alvaro Morata and Danilo – actually, calling £26.5million ‘big money’ these days is a bit yer da, isn’t it? – have been supplemented by the sales of fringe players Mariano Diaz, Diego Llorente and Burgui, plus a handy £4.5million loan fee for James Rodriguez.

Benfica are already closing in on the £100million mark for player sales this summer after the departures of Ederson, Victor Lindelof and Nelson Semedo, but they have yet to surpass their total from last season.

Renato Sanches was the most high-profile sale, while Goncalo Guedes and Nicolas Gaitan cost north of £25million each.

Interestingly, two of there next biggest sales were both to Championship clubs, with Helder Costa joining Wolves and Nelson Oliveira leaving for Norwich. Elsewhere, everyone’s favourite Manchester United flop, Bebe, headed for Eibar.

A prime example that when raking in plenty of money from player sales, you need to be able to spend it wisely.

But then they went and spent a good chunk of that money on Roberto Soldado and Paulinho.

After an underwhelming first season back at Chelsea, Jose Mourinho made his mark on the squad in 2014-15, selling David Luiz, Romelu Lukaku, Andre Schurrle, Ryan Bertrand, Demba Ba, Fernando Torres and Patrick Van Aanholt for a healthy sum.

The result? Chelsea won the title.

Funded by billionaire Souleyman Kerimov, Anzhi had run up a budget of £116million per year in the pursuit of success, which resulted in quite a big problem when Kerimov then decided to reduce the figure by two thirds.

Over the course of the season, this meant 16 players were sold, including Willian, Igor Denisov, Chris Samba, Lassana Diarra and Yuri Zhirkov.

Anzhi finished 16th in the Russian League, with no player scoring more than two league goals.

How do you make a profit on a big-name flop you’ve signed less six months previous? Step forward, Jackson Martinez, and on you go to China.

Meanwhile, Arda Turan left for Barcelona, despite not being able to play for half a season, while Raul Jimenez, Mario Mandzukic, Toby Alderweireld, Mario Suarez, Raul Garcia and Miranda also headed for pastures new.

After pulling off a remarkable title win and reaching the Champions League semi-final with a squad of talented youngsters, it was inevitable the vultures would start to circle Monaco this summer.

With a month left of the transfer window, Benjamin Mendy and Bernardo Silva have been prised away by Manchester City, while Chelsea have signed Tiemoué Bakayoko.

Should Fabinho, Thomas Lemar or Kylian Mbappe also be sold, Monaco will jump to the top of the list.

Juventus have made a very handy habit of constantly evolving their squad under Max Allegri, and last season brought around some of the biggest changes.

Meanwhile, Watford broke their club record to sign Roberto Pereyra, Hernanes headed for China, Mauricio Isla packed his bag for Cagliari, and Simone Zaza brought in not one but two loan fees.

Monaco may have lost plenty of talent this summer, but if it’s any consolation to Leonardo Jardim, he’s already proved he can rebuild the squad to impressive effect.

Two years ago Monaco waved goodbye to Anthony Martial, Geoffrey Kondogbia, Layvin Kurzawa, Aymen Abdennour and Yannick Carrasco among others. Even Dimitar Berbatov left on a free transfer, which makes us sad.