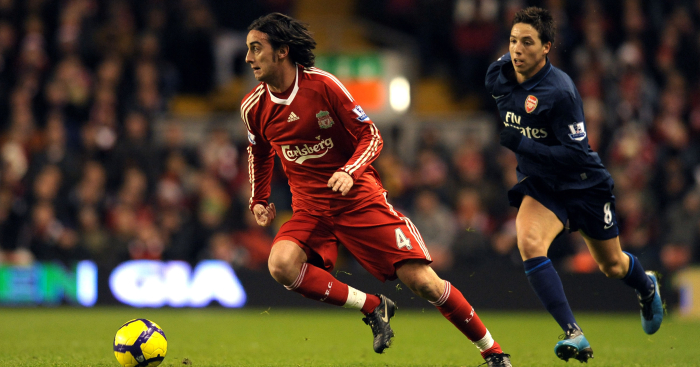 Former Arsenal, Liverpool and Manchester United men are among the players with Champions League experience to find themselves still without a club.

Any Football Manager player worth their salt will tell you the free agent market is a goldmine for over-the-hill illustrious footballers.

We’ve taken a look at 10 players currently at the job centre to have Europe’s elite competition on their CV.

Recent reports in the Daily Mail suggested Everton were weighing up a move for Nasri, who is available to resume training with clubs again next month following the completion of an 18-month drugs ban after receiving an intravenous treatment at an LA clinic in December 2016.

However, the Toffees moved to distance themselves from the link with Nasri, who won two Premier League titles with Manchester City after initially impressing in England with Arsenal.

Remember when Liverpool replaced Xabi Alonso with Alberto Aquilani? Supporters of the Reds are still trying to forget.

The midfielder arrived at Anfield in a £17million deal from Roma carrying an ankle injury and never found his best form for Liverpool, making just 28 appearances in all competitions.

Now 34, he has since played for Juventus, AC Milan, Fiorentina, Sporting Lisbon, Pescara, Sassuolo and, most recently, Las Palmas.

Another player linked with Everton earlier this year – as well as Wolves – Veloso’s name will ring a familiar bell with avid readers of gossip columns.

The midfielder was regularly mooted to be attracting interest from the likes of Arsenal, Manchester United, Chelsea and, erm, Bolton.

Having left Genoa for a second time in the summer, maybe the Trotters can finally land their man.

Can Bolton finally sign Miguel Veloso now or what? https://t.co/vfSrZjLYlh

Muntari finds himself in exactly the same position as he did last season, when he waited until February before signing a short-term deal with Deportivo La Coruna.

The 34-year-old, who won the Champions League with Inter, finished on the winning side just once in eight La Liga appearances as Deportivo were relegated.

Rossi may well find that he is able to attract offers after earlier this month it was announced he will not face a doping ban following his positive test for the banned substance dorzolamide.

The former Manchester United striker’s career has been decimated by serious knee injuries, but he still wants to add to his 30 Italy caps under new boss Roberto Mancini.

He told BBC Sport in the summer: “My job now is to show I am back, having fun again and playing the game and could help any team that I am on to get results.”

We completely forgot about his season at Crystal Palace and hadn’t realised he spent the second half of last season with Getafe.

There’s a possibility he is just too busy saving the world.

Extremely honoured to have been selected to join the #YGL18 . Thank you to @wef and @YGLvoices . I look forward to being part of this impressive community from around the world, with the main objective of trying to have a positive impact and making this world a better place. 🌎 pic.twitter.com/iWzSAZYFNB

The most positive man on the planet joined West Ham on a short-term deal in February after being sacked by Marseille for booting a fan in the head.

This month the former France international returned to training with the Hammers, but Football London suggest a contract offer is not on the cards in east London.

Toulalan left Bordeaux in January five months before his contract was due to expire in solidarity with sacked manager Jocelyn Gourvennec.

He is now 35 and has grey hair but has a lovely surname to listen to European commentators pronounce.

“It made me happy that he [Redknapp] thought of me and said that he wanted me after no contact for three or four years. The joke didn’t bother me at all, it made me laugh.

“What bothers me is that people take everything so seriously. If he had said that I wanted to be a cosmonaut it would have made less noise!”

He added:  “My mother discovered it on Mother’s Day. She told me that she would have preferred a different gift!”

Rather brilliantly, the 34-year-old has since fielded offers from the industry.

“The worst part is that since it came out, some of them have contacted me on Twitter. Jacquie and Michel left me a message saying, ‘Come and see us.’ And Dorcel invited me to come for a casting. Not to mention the American actor who wanted me to become his apprentice.

“It made me laugh and I thank them, but I believe I will continue in football!”

Two years ago, Johnson was being linked with a move to Barcelona having been recalled to the England squad.

Fast forward to 2018, and Johnson remains a free agent after being released by Stoke City upon their relegation. Stephen Ireland has found a club quicker.

What happened to Sotiris Ninis, the next great hope of Greek football?