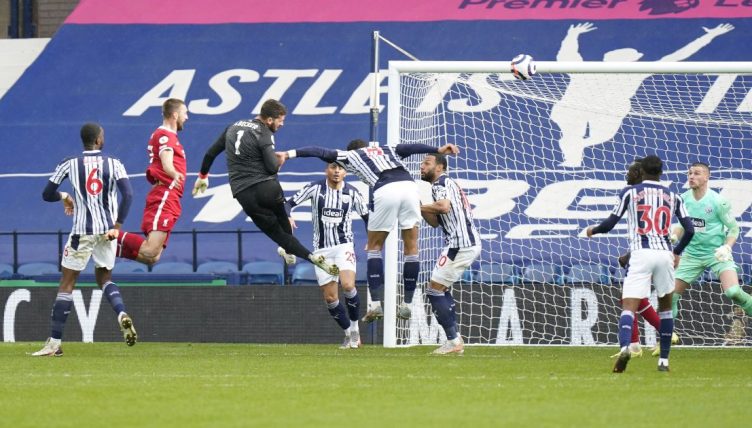 It is one of football’s extremely rare phenomena, seeing a goalkeeper do literally the last thing you would ever employ a goalkeeper to do: score a goal.

A sight to behold, and to be remembered when it does in fact happen, their goals tend to be added to by the drama, as the giant frames amble forward for the dying seconds in a last-ditch attempt to salvage a match.

Looking back over the years, goalkeepers have managed to provide some great drama, and sometimes with outlandish skill and attacking prowess…

With Liverpool’s hope of scraping Champions League qualification hanging by a thread, Alisson decided to come up for a corner against West Brom with the scores level at 1-1 in the 94th minute.

The Brazil international was left completely unmarked in the box by Baggies defenders who clearly underestimated him.

Andy Carroll would be proud of a bullet header like that.

New to the division, Italian Serie A minnows Benevento broke an 87-year record (held by Manchester United) after losing their first 13 matches of the 2017-18 season. They went on to lose their 14th, too. No top-flight club across Europe’s big five leagues had ever made a worse start to a campaign.

Then, they finally ended their losing run with a dramatic 2-2 draw against Milan. And as if that wasn’t enough, the scorer of their injury-time equaliser was none other than goalkeeper Alberto Brignoli. Brilliant.

The great Dane’s effort for Aston Villa against Everton might not have prevented a Villa defeat back in 2001, but the Di Canio-esque volley is the Premier League’s finest goalkeeper goal.

Tim Howard’s may have been funnier, Asmir Begovic’s further and faster, but this strike is pure class.

The 95th minute is just about the right time for a goalkeeper goal, a fact demonstrated by Toulouse keeper Ali Ahamada, whose dramatic equaliser with the back of his head against Rennes made Javier Hernandez look like an amateur.

Many consider Higuita to be something of a comedy figure thanks to his catastrophic d*cking around for Colombia at the 1990 World Cup and equally silly “scorpion kick” in a friendly against England.

But the mad sweeper-keeper really could play. The technique for this free kick for Atletico Nacional against River Plate seems all kinds of wrong, but that just makes it all the more impressive, really.

Poom made a name for himself at Derby, being named the club’s Player of the Year in the 1999-2000 season.

But unfortunately for Rams fans, the Estonian stopper scored this absolute bullet of a header against them, grabbing a late equaliser for Sunderland at the start of the 2003/04 season.

Undoubtedly one of the most significant goals scored by goalkeepers, this legendary Jimmy Glass strike against Plymouth kept Carlisle in the Football League in 1999, prompting a mass pitch invasion.

The journeyman keeper, on loan from Swindon at the time, ended his Carlisle spell with an impressive strike rate of one goal in three.

Brazilian goalkeeper Rogerio Ceni, the highest-scoring keeper in football history, retired in 2015 with 132 goals to his name — all thanks to a penchant for penalties and free kicks.

This beauty for Sao Paulo against Corinthians was the 100th of his career. Not bad.

Like fellow South Americans Higuita and Ceni, beloved Paraguayan goalkeeper Jose Luis Chilavert also had a knack for dead-ball situations. So much so, in fact, that he once scored a hat-trick of spot-kicks for Velez Sarsfield against Ferro Carril Oeste. Madness.

The last few years have produced some spectacular goals from goalkeepers. Accidental hoofs from 90 yards seem barely worth mentioning when you see goals like this from Den Haag’s Danish keeper Martin Hansen, formerly on the books at Liverpool.

The technique of Hansen’s flying backheel is perhaps bettered only by this bicycle kick from South African goalie Oscarine Masuluke, whose stunning goal earned Premiership side Baroka a draw against Orlando Pirates last year.

Masuluke’s effort was nominated for the Puskas Award, which instead went to Olivier Giroud, a player whose actual job is to score goals.

Goalkeepers can be as excellent as they like at preventing goals, but scoring them is what really puts their name in the history books.