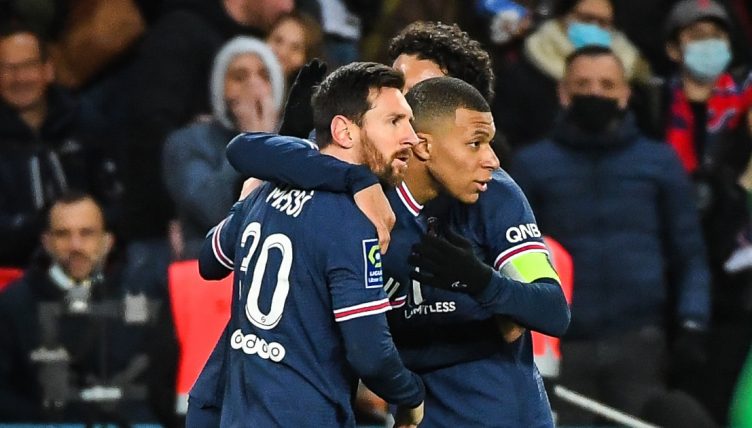 Paris Saint-Germain haven’t received a ton of praise for their performances this season, but they’ve been steadily improving in recent weeks and look on track for a special campaign.

In particular, Kylian Mbappe looks the best player in the world on current form, while after a slow start to life in Paris, Lionel Messi is reminding us how he dominated world football for over a decade.

The two are really starting to click together, and their contributions have led to the Parisiens effectively wrapping up the league title three months early. They’re also well-placed to make it past La Liga leaders Real Madrid and into the quarter-finals of the Champions League.

“It’s not easy to describe his performances,” PSG boss Mauricio Pochettino said after Mbappe shone in a 3-1 victory over Saint-Etienne.

“It’s incredible, magnificent. I am proud of him. I am happy about the game, we ended it well. The performance was a lot better when we changed certain tactical aspects. We add small things to this team, and that gives us a great richness in tactical terms for the big games.”

Here are 10 stats that demonstrate why Pochettino’s PSG are a force to be reckoned with – and how impressive Mbappe and Messi, in particular, have been.

– With his two assists for Mbappe in the victory over Saint-Etienne last night, Messi moved joint-top of the Ligue 1 assists chart with 10, level with… you guessed it, Kylian Mbappe.

– Five of Messi’s assists have come since the turn of the year. No player in Europe’s top five leagues has registered more in 2022 so far.

– Mbappe has completed 80 successful dribbles in Ligue 1 this season. Only Barcelona’s Adama Traore and Newcastle’s Allan Saint-Maximin have completed more.

– In spite of facing criticism for their performances this season, PSG have only actually lost two matches and will surely reclaim the Ligue 1 title. They boast a 16-point lead at the top of Ligue 1 – only Austria’s RB Salzburg boast a bigger lead in any of Europe’s leagues.

– At the age of 23, Mbappe is already PSG’s joint-second top goalscorer of all-time, level with Zlatan Ibrahimovic. He’s scored 156 goals in 205 appearances. Only Edinson Cavani has scored more.