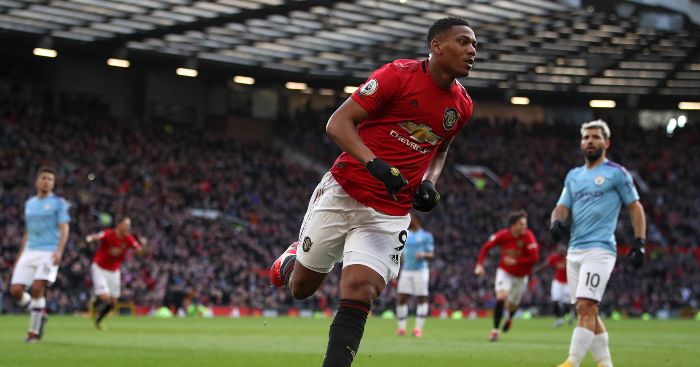 Anthony Martial has put inconsistency behind him and risen to the challenge as Manchester United‘s No.9 under Ole Gunnar Solskjaer this season.

Marcus Rashford’s long-term absence has heaped even more pressure on Martial, but the France international has responded with one of the best campaigns of his career to date.

We’ve compiled 10 stats that highlight just how impressive Martial has been for United in 2019-20.

– In 34 appearances this season, Martial has scored 16 goals and provided five assists at a rate of a goal or assist every 120.3 minutes.

– Martial is only one goal short of making this his joint-most productive season in all competitions, despite playing 15 games fewer than his current best, 2015-16.

– Despite missing six games through injury and there still being nine matches to play, 2019-20 is Martial’s joint-best Premier League campaign in terms of goals.

– United average 1.6 points per game in the Premier League when Martial has started this season, but this drops to 1.3 points per game when the forward has been absent from the starting XI.

– United have not lost any of the 10 Premier League games in which Martial has scored this season.

– Since the beginning of 2018-19, Martial has started 10 matches against the Premier League’s ‘big six’ and has scored eight goals.

– Martial is the first United player to score in both Premier League Manchester derbies since Cristiano Ronaldo in 2006-07.

– Martial is only the second player, after Eric Cantona, to score in three consecutive starts in Premier League Manchester derbies.

– Only Marcus Rashford has scored more goals in Manchester derbies in the post-Alex Ferguson era.