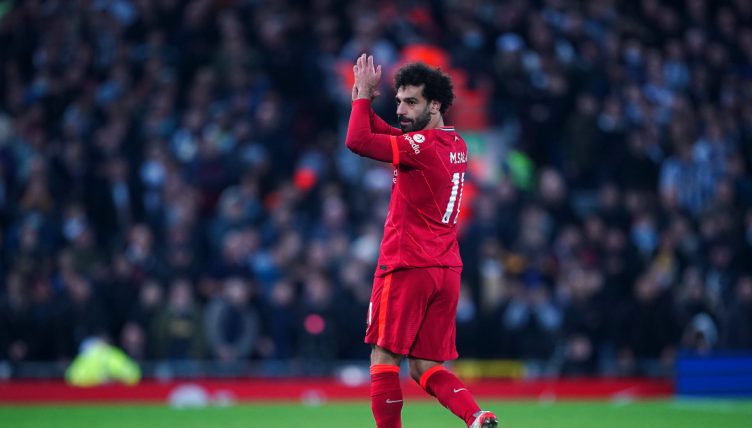 On current form, it’s impossible to look past Mohamed Salah when discussing the best player in the world.

The Egyptian has been in irresistibly good form for Liverpool this season and, with his goal against Newcastle has now equalled another Premier League record.

He has now scored or assisted at least one goal in every one of his last 15 Premier League outings, equalling the mark set by Jamie Vardy.

It is a run that stretches back to the third game of the season against Chelsea, the previous match against Burnley being the only match in which he has not been directly involved in a goal in 2021-22.

His goal against Newcastle also means he is the first player in history to score in five consecutive Anfield games.

So here are 10 stats behind the Egyptian King’s simply astounding run of form.

– He has scored 14 goals in those 15 games, including a run of scoring in seven straight Premier League matches from the game against Chelsea on the 28th August to the pummelling of Manchester United on the 24th October.

– In that match against Manchester United he scored a hat-trick, his fourth in the Premier League and only the eighth in North-West derby history.

– That hat-trick also made him the highest-scoring African player in Premier League history, leapfrogging Didier Drogba’s 104 goals. Salah currently has 112.

– One-hundred-and-ten of those Premier League goals have been for Liverpool, the other two both coming in the 2013-14 season from his time at Chelsea. It means he has a goals-per-game ratio of 0.64 in the league.

– That mark also means he is closing in on becoming Liverpool’s highest ever Premier League goalscorer, the current record being held by Robbie Fowler who scored 128 goals in 266 games. In comparison, it has taken Salah just 162 games to hit 110 for the Reds.

🗣"I always try to find a motivation inside me to give my best."

Mo Salah surpassed Didier Drogba's African record of 104 goals in the Premier League earlier in the month and admits these records drive him on pic.twitter.com/iYgMT6CpVO

– Salah has assisted seven times during his 15-match run, which along with his two on the opening day of the season against Norwich means he has nine total Premier League assists so far this season and sits top of both the goalscoring and assist charts.

– In three games, he both scored and assisted. They all came in a three-match run against Manchester City, Watford and Manchester United during October.

– Only two of his goals were penalties, coming against Chelsea and Aston Villa. That means in the 15-game run he has scored 12 goals from open play.

– This season he has had an xG (expected goals) of 10.8 in the Premier League, meaning he is outperforming his expected goals by around 4.2, a testament to the clinical finishing he has demonstrated.

– Similarly, Salah has outperformed his xA (expected assists), which is at 6.5, by 2.5. That means his Liverpool teammates have also been on form and converted harder chances, boosting Salah’s assist total.

It was like I belonged’: How Daniel Agger became a Liverpool cult hero