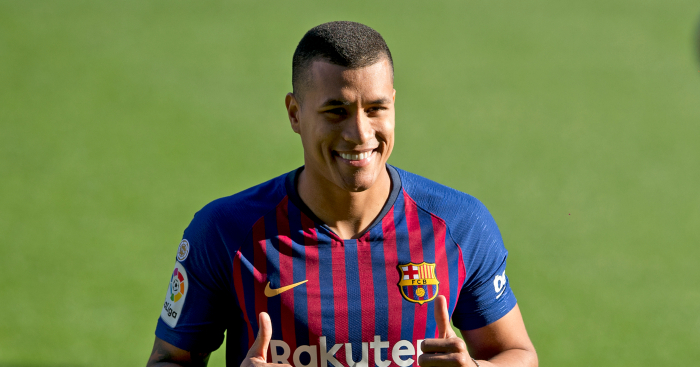 The January transfer may only have just opened, but a number of interesting transfers have already been completed around the world.

Signing players that represent good value in the winter window is supposed to be notoriously difficult, but that hasn’t stopped plenty of clubs getting to work right away.

We’ve rounded up 10 deals which have already caught our eye.

“It was an emergency situation. We were looking for a player with experience, who knew La Liga. A priority.”

Ernesto Valverde’s explanation for Barcelona’s signing of Murillo on loan from Valencia was hardly a ringing endorsement of the centre-back, but injuries to Samuel Umtiti and Thomas Vermaelen forced his hand into doing swift business.

The move continues Murillo’s strange career trajectory, having now found himself sent out on loan, usually out of favour, by every club he has played for, while still making the step up to some of the biggest teams in the world.

We’re all expecting this to go wrong, but just imagine: Samir, back in the Premier League, under the guidance of the man who inspired some of his best football at Manchester City, a little older, a little wiser, with a point to prove.

No, not Leeds United’s weirdest signing since relegation from the Premier League, but the actual good one.

Haidara impressed over the last two seasons with RB Salzburg and has been given wings and joined RB Leipzig, although he will be unable to make his debut until March due to injury.

“He has all the capabilities to follow in Naby Keita’s footsteps,” Leipzig head coach Ralf Rangnick said of the 20-year-old.

A player who arrived in the Premier League amid plenty of intrigue having been dubbed the ‘Egyptian Messi’, Sobhi failed to fully establish himself at Stoke despite showing early promise and has likewise struggled to break into David Wagner’s starting XI at Huddersfield.

Still only 21, Sobhi has rejoined to former club Al Ahly on loan, although he admits his aim is to “return to Europe” down the line.

“Al Ahly is my home and I cannot turn them down any time,” he said. “I never hesitated to return to the club. At first Hudderfield officials objected the move before I interfered and convinced them to accept the idea of rejoining Al Ahly.”

Today I return back to my country for 6 months to help my childhood club in the African Champions League & make my way back to the National Team. All the best to #TheTerriers Great club, great fans & great people. I’ll be back stronger next season! Much love & see you soon ❤❤️ pic.twitter.com/rEojZLcRXh

A winner of trophies with both Bayern Munich and Borussia Dortmund, Rode has failed to make a senior appearance for the latter for the best part of 18 months due to a host of injuries.

The 28-year-old first made his name at Eintracht Frankfurt, and the midfielder has returned to one of Europe’s early surprise packages on loan in the hope of getting his career back on track.

Holgate seemed to be establishing himself as one of England’s more promising young defenders at Everton over the past two seasons, only to be frozen out under Marco Silva since the start of October.

Promotion-chasing West Brom beat off reported interest from Leeds United and Bournemouth to win the race to sign the 22-year-old on loan, with another exciting Everton youngster, Kieran Dowell, also moving to the Championship for a temporary spell with Sheffield United.

We’re not saying Guingamp are feeling a little bit desperate at the bottom of Ligue 1, but they’ve snapped up both Djilobodji and Didier Ndong on free transfers after the duo were sacked by Sunderland in September for failing to return to training following their relegation to League One.

You’d completely forgotten about Matt Jarvis, hadn’t you? But now you’ve immediately remembered he does indeed have an England cap, haven’t you?

The winger has barely been seen in recent years due to injury, appearing just 21 times in all competitions for Norwich City across three seasons.

And with the Canaries battling for promotion at the top of the Championship, the 32-year-old has dropped down a division to join Walsall on loan for the rest of the season as a replacement for Preston-bound Josh Ginnelly.

When the top 5 UK trends are

You know this year already will be mental

Despite a disappointing second half to his debut campaign at Leeds United, Saiz was a firm favourite among supporters after beginning this season in the same form which saw him light up the Championship at the start of 2017-18.

The Spaniard was quite possibly Leeds’ most naturally talented and imaginative player since their Champions League days, but he has returned to his home country to join Getafe on a loan deal which will be made permanent for £6million in the summer.

Plenty of fans were disappointed in the player’s decision to leave the Whites just as a promotion charge appeared on the cards but, given he is returning to his hometown to play for a side seventh in La Liga while his partner is pregnant, we can understand the cut of his jib.

One of football’s greatest globetrotters has come a long way since becoming the Coca-Cola Kid when joining Brighton in 2005.

Spells in Turkey, France, Greece, Holland, Scotland and Brazil have followed, and the forward has most recently added Mexico to that list.

The 32-year-old has been on loan at Lobos BUAP since July but has now joined Tiburones Rojos de Veracruz.