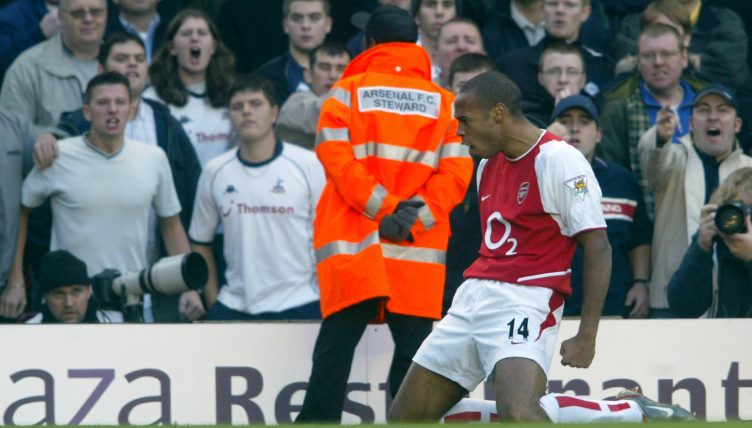 North London derbies are often one of the best Premier League fixtures of any season – and it has provided both Arsenal and Tottenham fans with some brilliant moments over the years.

The number of points on offer may not change depending on the opposition, but some wins really are worth so much more than others.

For Arsenal and Tottenham fans, no game is more important than the North London derby – and here are some moments that will live long in the memory of all those who witnessed them.

A sublime way to start an FA Cup semi-final.

#OnThisDay in 1991, Gazza scored this wonderful free kick against Arsenal in the FA Cup SF. What a player 😍😍
(Video Source : FA) #THFC pic.twitter.com/r7BNhwQzFq

To highlight just how important this game means to both clubs: Thierry Henry’s heroics in 2002 have been immortalised in the form of a statue outside the Emirates.

Henry’s goal remains one of the derby’s greatest, and his celebration remains iconic to this day.

#OTD in 2002, Arsenal beat Spurs 3-0 at Highbury. The day that Thierry Henry scored one of the greatest solo goal in Premier League history. Then ran the length of the pitch again to celebrate in front of the Spurs away end. Iconic 👏💪 #AFC

Premier League football, we are told, is the pinnacle. The best tacticians and the best players pitting their wits against one another, with the first to flinch left for dead.

But every now and again we are treated to a complete abandonment of these principles. No real commitment to defending, just a thirst for madness and a quest for lots of goals.

The North London derby is often good value for that.

On this day in 2004, Arsenal beat Tottenham 5-4 at White Hart Lane. pic.twitter.com/pHvIIjzhvl

Not that Arsenal’s 2003-04 league campaign could have gone much better, but for the Gunners to win the title at Tottenham was pretty perfect for the red half of North London.

Even Spurs fans could go home with a wry smile on their face, having seen their side salvage a draw from 2-0 down thanks to Robbie Keane’s injury-time penalty.

But the day – and season – belonged to Arsenal.

The Invincibles: Who was your favourite player in the Arsenal 2003-04 squad? pic.twitter.com/J9BKCAvCCC

Utter the words ‘David Bentley’ and this is the first moment to come to mind.

The midfielder may have failed to live up to expectations at Tottenham, but his finest hour could hardly have been more spectacular.

Bentley’s ridiculous opener was the kick-starter for a ludicrous derby, which ended 4-4 after Spurs fought back from 3-1 and then 4-2 down.

Between November 1999 and January 2008, Tottenham failed to beat their fierce rivals once.

But when that time came – in the second leg of the League Cup semi-finals – Spurs could hardly have been more emphatic, winning 5-1 in a game which resulted in Nicklas Bendtner clashing with team-mate William Gallas.

One of the best Spurs results in recent history 🌟

Cesc Fabregas and his one man mission – 2009

Tottenham were beginning to get their act together by October 2009 but Cesc Fabregas wasn’t about to let Arsenal’s supremacy slip through his side’s fingers.

The future World Cup winner scored straight from the kick-off during the Gunners’ 3-0 victory, causing the entire Spurs defence to contemplate an early retirement in the process.

Just keep things simple, don’t make any mistakes, and you can come out of the game with your head held high.

Or you can just score the goal of the season after 10 minutes. That will do as well.

And what a debut… 🌹
pic.twitter.com/HSwe0AOr11

Even when Spurs started to pick up wins against Arsenal again, victory in their rivals’ own back yard was elusive until 2010.

Coming back from 2-0 down, they ended a 17-year wait for a win at the Gunners, inspired by the attacking brilliance of Gareth Bale and Rafael van der Vaart.

And yet it was Younes Kaboul who came up with the winner.

#DerbyDay | Tottenham Hotspur staged a stunning comeback to win at Arsenal and wreck the Gunners' hopes of going top of the Premier League.

With Gareth Bale, Rafael Van Der Vaart and a last-minute winner from Younes Kaboul for Spurs.

Derbies can do weird things to people.

Even Theo Walcott, the most placid, sensible, uncontroversial footballer in the history of the game rose to the occasion in 2014.

Being stretchered off with what would turn out to be a season-ending knee injury, Walcott responded to jeers from the Spurs fans with a simple reminder of the score: 2-0. Fair enough.

“He’s one of our own,” will always be a contentious topic in North London when it comes to Harry Kane, but the striker is becoming an irrepressible figure in derbies.

His goal at White Hart Lane in the 2015-16 season was a particular highlight.

Remember when Harry Kane did this against Arsenal? 🎯pic.twitter.com/SBLpJDvMFI

The final three nominees for the Puskas Award 2021 🌟