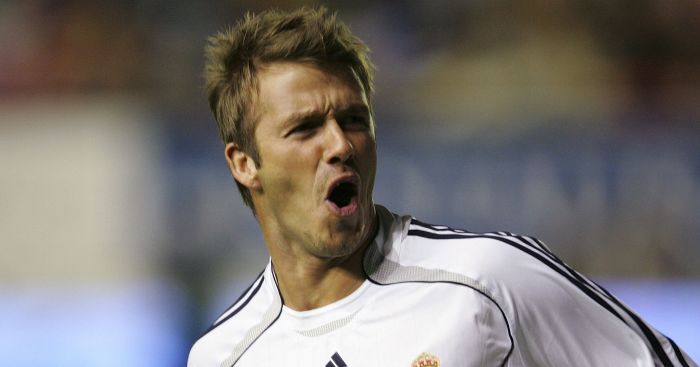 David Beckham will go down as one of the most successful and most popular England players of all time – but his career certainly wasn’t one of ups alone.

On June 30, 1998, Beckham was sent off against Argentina at the World Cup in France, resulting in England’s exit from the tournament and a huge backlash back home.

He was public enemy number one on his return to England, but it’s all character building stuff as ‘Golden Balls’ showed the world in the years that followed.

He went onto play for Real Madrid, LA Galaxy, AC Milan and Paris Saint-Germain following his departure from Manchester United in 2003 – making 719 career appearances and scoring 129 goals. He retired a legend with his popularity well and truly secured again.

The following season was to be his breakthrough year, with 33 appearances and seven goals to help the Red Devils lift the Premier League title.

David Beckham was part of ‘Fergie’s Fledglings’ that won the Premier League title in 1995-96.

However, he didn’t properly announce himself to the world until the following season at Wimbledon when spotted the keeper off his line and attempted an incredible 50-yard lob, which astonishingly went in! That was some goal.

ON THIS DAY, In 1996: David Beckham scores inside his own half to make it 3-0 against Wimbledon. #MUFC pic.twitter.com/71zcmZv8lz

Possibly the most infamous moment of Beckham’s career. Becks played all of England’s qualification matches leading up to the 1998 World Cup, but he was dropped for the first two matches of the group stage.

Beckham got a start in the Round of 16 match against Argentina, but it was to end in tears. The England midfielder kicked out at Diego Simeone after he was fouled, leading to his dismissal, England’s exit and a huge backlash back home.

#OTD in 1998 — David Beckham kicked Diego Simeone and was shown a red card in the World Cup round of 16. pic.twitter.com/8PiTzD0tP8

Although Beckham didn’t score the goals that ultimately won each competition, ‘Golden Balls’ was one of United’s best players as they won the Premier League, Champions League and FA Cup.

Nine goals in 55 appearances that season, including a strike against Tottenham on the final day of the Premier League season, helped the Red Devils to become the first English club to win the treble.

One of the most memorable England goals of all time, Beckham’s last-minute free-kick against Greece secured qualification for the 2002 World Cup.

England only needed a point to qualify but trailed 2-1 heading into injury time. Up stepped Captain Fantastic to arrow a pin-point free-kick into the top corner.

💬 “Beckham has virtually played Greece on his own!”pic.twitter.com/JrAbdOmwML

Beckham was long since exonerated, but he truly exorcised his demons when England met Argentina in the Group Stage at the 2002 World Cup.

The England captain stepped up to take a penalty – won by Michael Owen – and duly delivered to give England a 1-0 win and put memories of his kick on Diego Simeone firmly behind him.

He even had to walk past Simeone to take the spot-kick. Nerve-shredding stuff!

The Manchester United legend signed off in typical Beckham style during his final appearance for the Red Devils against Everton at Goodison Park.

He struck the sweetest whipped free-kick from the right-hand side into the top left corner of the net. What a way to go!

David Beckham's final #mufc strike was away to Everton in 2003 – what a way to sign off! https://t.co/ysyxuMfRp3

He joined Real Madrid in 2003 as only the third Englishman (after Laurie Cunningham and Steve McManaman) to join the Galacticos.

He got to play alongside stars such as Roberto Carlos, Luis Figo, Ronaldo, Zinedine Zidane and Raul, and though he had his ups and downs, he capped his time off in the Spanish capital by winning the La Liga title in his final season.

In an unprecedented move, Beckham chose to join MLS side LA Galaxy in 2007 and spent five years in America.

Not an instant success, the central midfielder finally did his talking on the pitch in 2010 & 2011, helping Galaxy win two out of three MLS Cup finals he contested.

Final match for PSG and retirement

Beckham’s 21-year career came to an end in the French capital after making 14 appearances in all competitions to play some part in PSG’s Ligue 1 title victory.

In his final match for his last club, he received a standing ovation from the PSG fans after he was subbed on 80 minutes in a 3-0 win over Brest.

Becks grabbed an assist for Blaise Matuidi, while he got hugs off his team-mates and manager as he made his way off the field. What a career!