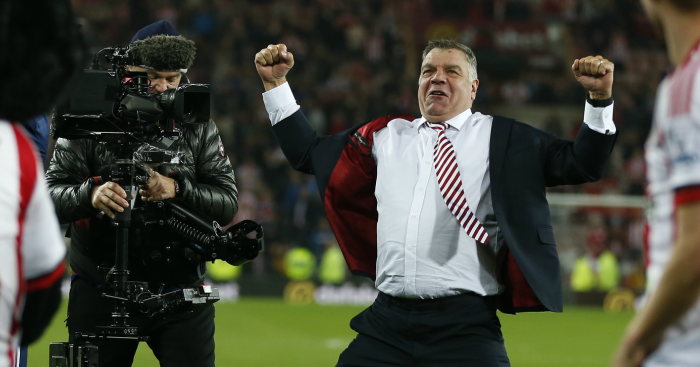 Yes, managers like Sir Alex Ferguson, Arsene Wenger and Pep Guardiola may have collected trophies like a first-year student collects vintage jumpers. But have they married the contrasting styles of Jay-Jay Okocha and Nicky Hunt into a team that persistently bothered the elite clubs? No, they did not.

Sam Allardyce laughing at Chico Flores will never get old 😂😂😂

Like a soap villain getting their comeuppance, it’s always funny to see another manager give Mourinho a taste of his own medicine.

Dr. Allardyce administered a healthy dose after West Ham eked out a goalless draw at Stamford Bridge in 2014.

Rumour has it that Rihanna saw this video and wanted Allardyce as her back-up dancer on the popstar’s 2016 world tour.

With hips that put Shakira to shame, we can only commend her taste.

We’d manage West Ham, the footballing equivalent of fostering a teenager with behavioural issues, if there was a chance of receiving a smacker from Russell Brand.

After receiving one from the TV personality following a victory over Manchester City, Allardyce turned a colour that Dulex would describe as puce.

Asked in 2010 about the prospect of managing an elite club, the then Blackburn Rovers boss told reporters: “I won’t ever be going to a top-four club because I’m not called Allardici, just Allardyce.

“I’m not suited to Bolton or Blackburn, I would be more suited to Inter Milan or Real Madrid. It wouldn’t be a problem to me to go and manage those clubs because I would win the double or the league every time.”

This demonstrated a level of self-confidence would put candidates on The Apprentice to shame.

In his autobiography, Allardyce spoke about his love of winding up Arsene Wenger.

“I enjoyed beating Arsenal more than anyone when I was in charge at Bolton,” Allardyce said. “We’d really got to them and Arsene Wenger hated us.

“There was one time he wouldn’t shake hands with me at Highbury because we got a draw. I saw him ripping his tie off and throwing it on the floor in anger. He takes it all very personally and has an air of arrogance. He’s not one for inviting you into his office for a drink after the game.

“The more I wound him up, the more I liked it.”

After Manchester United snaffled a last-minute equaliser at West Ham in 2015, Big Sam said  ‘We couldn’t cope with long-ball United – it was thump it forward and see what they could get.’

A comment that said with more than a hint of mischievousness, you’ll agree. Louis van Gaal didn’t quite see the funny side.

Louis Van Gaal after Sam Allardyce accused him of playing long ball football: “Yeah, long balls wide, to switch play. You have to look at the data & you will see that we played long balls, but wide, rather than to the striker.”

He even brought the diagrams to prove him wrong. 😂 pic.twitter.com/ibgOTeJBaI

You can imagine how much this endeared Big Sam to the flat-capped geezers at West Ham.

Reporter🗣"Do you regret cupping your ear?" 🤔

Big Sam 🗣"No why should I? In my younger days, I would have done a lot worse!" 🤣

This reminded us of a scrap outside a taxi rank after a night out where everybody’s had one too many.

On this evidence, there’s no chance you’d find us messing with Big Sam in any capacity.

In a parallel universe, Allardyce would have been leading England at the 2018 World Cup and leaving the world’s premier defences bamboozled on how to deal with Andy Carroll.

An undercover journalist and a pint of wine put paid to that dream, but Allardyce was kept busy during the tournament in Russia – by pulling pints and playing pool in a William Hill promotional shoot.

Win a place at the William Hill Arms for you and four mates when #ENG face #BEL on Thursday.

👇 Here’s what happened when we welcomed Big Sam on Sunday 🍔 pic.twitter.com/3SPDUQYEpb

10 people who have felt the wrath of Jurgen Klopp: Lampard, Allardyce, Keane…