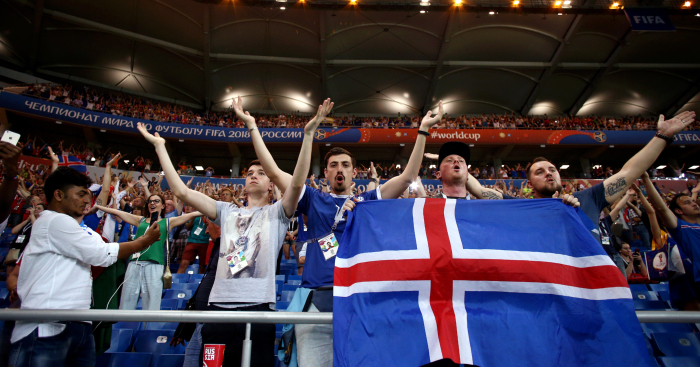 The World Cup sees supporters from around the globe come together and create a wonderful atmosphere – and it was certainly no different in Russia.

And in this day and age, videos can quickly fly round social media of supporters at their best, be it supporting their nation, firing banter at other fans or coming together to support each other through tough times.

We’ve taken a look at some of the best chants that the 2018 World Cup has seen, and you might struggle to get some of these out of your head.

OK, so it’s not too complicated a chant, but the nation came together as one following their positive start to the World Cup, with the chant ringing around stadiums, streets, trains and the rest.

All light-hearted of course, but Swedish supporters had a great response to the classic chant from England’s fans in Russia.

It didn’t exactly catch on, but this guy’s chant as Gylfi Sigurdsson stepped up to take his penalty against Nigeria is the sole reason he missed, right? And videos quickly spread of Nigerian fans at home screaming the words at the television.

Competing at their first World Cup since 1982, Peru fans were treated to a victory in their final Group C game against Australia, with their vocal supporters pulling out this charming number.

After they brought the clap for its impressive debut at Euro 2016, we couldn’t leave the wonderful Iceland fans out of this.

It seems the entirety of Iceland has descended upon Moscow.More: https://www.planetfootball.com/quick-reads/13-things-we-loved-on-day-two-ronaldo-nacho-rashford-de-bruyne-more/

SOUTHGATE YOU’RE THE ONE! pic.twitter.com/HeA5DS95mG

After being fined for the 12th time in three years for homophobic chanting at the beginning of the tournament, Mexican fans turned their attentions to supporting the side, with chants for star man Hirving Lozano and manager Juan Carlos Osorio – not long after calling for his head.

El Profe Osorio!" the #MEX fans singing to "Seven Nation Army" I can't believe it! From #FueraOsorio to singing his name in three matches.

After Poland slumped to a disappointing exit from the tournament, these brilliant Colombia fans came together to console a crying opposition supporter.

Colombia fans chant to console a young Poland fan who was crying after their elimination. What the World Cup is all about #mmlove pic.twitter.com/bSo6E62Mli

They may not be supporters, and we may have no idea what they’re singing (or in fact what they’re doing), but this warm-up routine looks like a lot of fun.

Along with Atomic Kitten, this Earth Wind & Fire-inspired number was the chant of choice for England fans at the World Cup. And it’s pretty good.

A ranking of the best haircuts at the World Cup: Griezmann, Alli, Neymar