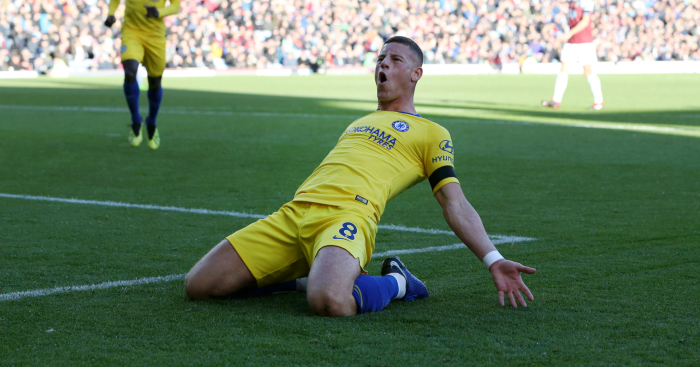 A new season can bring a new start for professional footballers, as players from Chelsea, Liverpool, Arsenal and Manchester United have discovered this term.

Clubs, fans and pundits can all be guilty of thinking that making big-money signings is the only way of solving problems on the pitch.

Sometimes, revitalising a player who has lost their way might be the better option, and we’ve taken a look at 10 names who are enjoying a resurgence this term.

Despite making the step up from Everton to Chelsea, Barkley had suffered something of a fall from grace over the past 18 months after a number of injury problems and his controversial exit from Goodison Park.

The midfielder failed to make an impact in his first six months at Stamford Bridge, playing just 131 minutes of Premier League football under Antonio Conte.

With new manager Maurizio Sarri signing Jorginho and Mateo Kovacic, plus the return of Ruben Loftus-Cheek from an impressive loan spell at Crystal Palace, it was difficult to see how Barkley would break into Chelsea’s first team.

However, the 24-year-old has clearly made an impression on Sarri, and vice versa, and he has made himself an integral part of the plans for both club and country.

We’re absolutely loving him back to his best.

Ross Barkley's last 165 minutes of football in the Premier League:

Producing the football he is capable of this season. So much potential 💪 💎 pic.twitter.com/oaTTzGsblF

As our friends at Football365 summed up in August: “Leicester spend £100m…and then find hero in a cupboard.”

Mendy was initially signed in 2016 given the unenviable task of replacing the energy, industry and outright brilliance of N’Golo Kante.

The former France youth international understandably struggled to reach such high standards and, after injury restricted the midfielder to just four Premier League appearances in his debut campaign, he was shipped out on loan to Nice last term.

Back at the King Power stadium, Mendy has already played in twice that amount of top-flight matches this term, forming an impressive central midfield partnership with Wilfred Ndidi which allowed James Maddison to sparkle as a No.10.

Just forget that miss against Manchester City for a second and remember that Lamela is re-establishing himself in the Tottenham side after what he described as the “worst year of my life”.

A hip injury ruled the winger out for over a year and, though he eventually returned last season, he made just seven starts in the Premier League last term.

The Argentina international, transformed by Mauricio Pochettino after a slow start to life at Spurs, now appears to be getting back close to his best, with five goals to his name already representing his joint-second most prolific season in north London.

Erik Lamela starts back-to-back PL games for the first time since October 2016 – he has 4 goal involvements (3 goals & 1 assist) in 163 minutes of PL action this season pic.twitter.com/hvhiCRdPfR

After a poor Euro 2016 tournament for England, Hart has endured a torrid two years, from being outcast by Manchester City to being dropped by West Ham to missing out on England’s squad for the World Cup.

The goalkeeper needed a fresh start, and Burnley have given him just that. Facing competition from fellow England stoppers Nick Pope and Tom Heaton – albeit with Pope injured – Hart has established himself as Sean Dyche’s No.1.

Hart is getting plenty of opportunities to catch Gareth Southgate’s eye in the hope of earning a recall to the national side, having made the joint-most number of saves in the Premier League this season with 44 – level with West Ham’s Lukasz Fabianski.

Alexandre Lacazette and Pierre-Emerick Aubameyang’s form may have made it difficult for Welbeck to break into Unai Emery’s Arsenal side in the Premier League, but the forward is giving his new manager a headache with his performances in the cup competitions.

Last season saw the England international scored 10 goals in 43 appearances. This season he has already managed half that tally, despite playing just 10 matches.

“The manager says he wants [Jose] Fonte from Southampton and [Robert] Snodgrass from Hull. My kids begged me not to sign them.”

The winger had shone in the Premier League for Norwich and Hull but struggled to find his best form after moving to the Hammers in January of that year.

A season on loan in the Championship plus the arrivals of Andriy Yarmolenko and Felipe Anderson hardly suggest the Scotland international was about to find himself in the first-team picture in East London.

But the 31-year-old impressed in pre-season and has now made himself a valuable member of Manuel Pellegrini’s squad, appearing in all 10 Premier League fixtures to date this term.

After West Ham beat Manchester United in October, Jose Mourinho even implored his players to follow Snodgrass’ “incredible attitude that he wants to eat the ball and eat everyone around him”.

Okay, it may be too early to call it a resurgence, but Martial appeared likely to leave Manchester United as the latest player to fall foul of Jose Mourinho.

Two defeats in his only to Premier League starts prior to October hardly helped Martial’s cause, but four goals in his last four appearances – all of them crucial to the side picking up points – have suddenly made the France international United’s most dangerous forward.

Anthony Martial in the PL:

There are few positives to come out of Southampton’s season so far, but it’s hard not to feel pleased for Ings, who is back playing regular first-team football after a two-year injury nightmare.

Still only 26, the striker has already scored three goals, meaning this is his best tally in a Premier League season since bagging 11 for Burnley in 2014-15, while he also notched once in the League Cup.

Southampton will need the one-cap England international to hit the back of the net regularly if they are to pull themselves away from relegation trouble, but for now the big plus is that Ings’ body has so far managed regular minutes.

Sturridge may not be Liverpool’s first-choice striker under Jurgen Klopp, but, given his body’s frailties, he may not need/want to be.

Instead, Sturridge’s challenge is to be at his brilliant best whenever he is rotated into the side. After a dismal loan spell at West Brom in the second half of last season, there were doubts whether the 29-year-old would be able to manage that.

Goals against West Ham, PSG and Chelsea this season suggest the England international may actually have found his perfect role at Anfield.

Another player mired in West Brom’s miserable relegation, Foster appeared in all but one of the Baggies Premier League fixtures last term as they finished rock bottom.

He returned to Watford, where he played arguably the best football of his career between 2005 and 2007, and the goalkeeper has no doubt enjoyed this campaign much more.

The Hornets are riding high in seventh, with only five clubs conceding fewer goals.

Can you name every player to score in the 18-19 Premier League season so far?