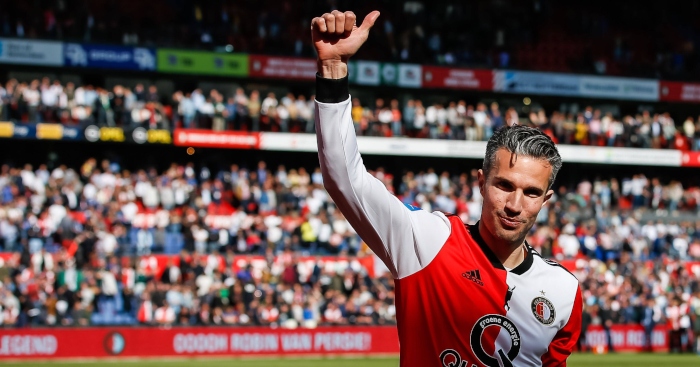 As we enter the summer months, most supporters are looking ahead to new players they may welcome to their clubs – but it’s also time to remember those who will be waving goodbye to the game.

All good things must come to an end, and the list of players retiring at the end of the season makes us realise we really are getting old.

We’ve taken a look at 10 notable names and familiar faces who have decided to hang up their boots.

Van Persie retiring at the age of 35 is a shocking reminder of our own mortality, but it’s a testament to the man himself that he has lasted so long after so many injury problems during his early years at Arsenal.

When he was fit and firing, few strikers in the Premier League could match the Dutchman, especially during his final season in north London and debut campaign at Manchester United, when he struck 67 goals in all competitions.

By all accounts a nice man and definitely a great goalkeeper, Cech has set the benchmark for all Premier League stoppers to aspire to with a record 202 clean sheets in 443 appearances in the competition.

Yet the 36-year-old still isn’t done, with the small matter of the Europa League final against his former club Chelsea still to come before the end of the season.

Barzagli perhaps attracted fewer plaudits than team-mates and defensive partners Georgio Chiellini and Leonardo Bonucci, but having joined Juventus for just €600,000, the centre-back has proved an immense servant to the Italian giants.

Not only did Barzagli help inspire Wolfsburg to their one and only title, the 38-year-old will retire having also won eight Serie A crowns, four Italian Cups and the World Cup.

It’s little wonder Juve chairman Andrea Agnelli dubbed him “the best signing we ever made”.

Ahead of Benayoun’s final appearance for Beitar Jerusalem, he took to the field flanked by his five children, who were all clad in the shirts of different English clubs he has represented over the course of his career: West Ham, Liverpool, Chelsea, Arsenal and QPR.

A career in which he won It All – including the Qatar lottery – has been drawn to a close, with Xavi announcing his decision to make the transition to coaching at the start of May.

“My philosophy as a manager reflects the style that we developed for many years under the influence of Johan Cruyff and from La Masia and its main exponent is in the way Barcelona play,” he said.

“I love to see the teams that take the initiative on the field, attacking football and go back to that place we all loved since the days of our youth: possession football.”

Seventy-nine caps for Brazil, for whom he appeared at the 2010 World Cup and won two editions of the Copa America with, plus over 300 appearances of top-flight European football with Bayer Leverkusen and Roma, winning honours with the Italian outfit.

Juan has spent the last seven years back in his home country with Internacional and Flamengo, but the defender bowed out at the ripe old age of 40 at the end of April.

A lesser known name, Pellissier is an icon at Chievo, who will retire his No.31 shirt in honour of the striker’s 19 years of service.

Now 40, Pellissier is both the record appearance maker and goalscorer for Chievo, and even scored on his one and only appearance for Italy’s senior side in 2009.

While he spent the last eight years of his career at Sunderland and Reading, O’Shea will always be best remembered as Manchester United’s great court jester – but he was always in on the joke.

“It was a perfect ending – I couldn’t have asked for anything else after 20 years as a professional,” Bruno told Sky Sports after playing his final match as a professional football in Brighton’s defeat to Manchester City.

“I’m really thankful, I don’t know what to say. Being at Brighton changed my life. I’m really happy for this experience. This is my home right now. I love this club and I would like to stay with them. We are working on it.”

No, we didn’t actually know he was still playing for Swindon Town either, but Taylor will be scoring 40-yard screamers no more.