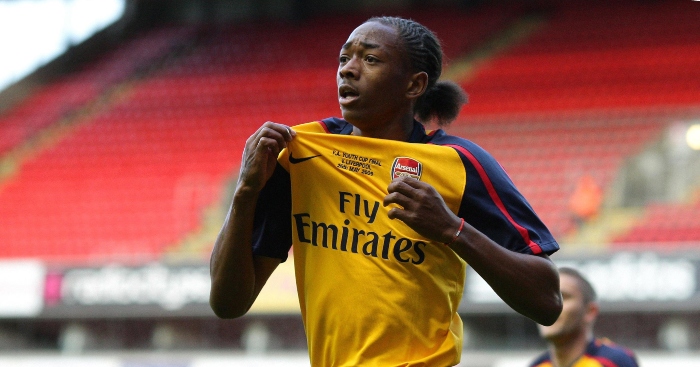 When a player drops down from the Premier League, their visibility can begin to fade like Marty McFly’s family photo in Back to the Future.

We spot their name in the occasional Football League round-up, then they’re down in a lower division, and eventually they’ve slipped so far into non-league that we haven’t even heard of the club they represent.

That doesn’t mean they’ve given up, though – far from it. Here are 10 players still very much plugging away below the 92. Some of them very far below.

In the 2060s, when the sea levels rise and the earth is virtually uninhabitable, Jamie Cureton will still be playing football.

In April, the 44-year-old became the 29th footballer to have played 1000 senior matches, and he recently became the first player in history to score in the top nine tiers of English football.

Cureton made his Premier League debut for Norwich City in 1994, before some of his current team-mates were even born.

32 – Goal for Blues. Cureton converts high into the net after good build up from Renee and an unselfish pass from Worman gets him an assist on his second debut. 2-0.

Addison made his Derby debut at 17 and even earned Premier League minutes for the club under Paul Jewell, but now he finds himself in Nuneaton.

There can’t be too many England Under-21 internationals playing in the Southern Premier, but the centre-back is there, along with former Manchester City academy prospect Curtis Obeng and a load of other players who you probably don’t know.

The centre-back has played more Premier League games for the Magpies than Laurent Robert, Peter Beardsley and Lee Clark, but he had dropped down to non-league within two years of leaving the club.

Morgan was once a highly rated teenager at Liverpool and was tipped but to be the next Robbie Fowler, but he failed to make the grade at Anfield and was sold in 2014.

“Rodgers said he thought I maybe needed to go to a Championship club and kick on from there. He told me it straight,” Morgan told the Liverpool Echo.

“I went and sat in my car outside Melwood and cried. It hurt being told my time at Liverpool was over.”

The striker has since spent most of his career in the lower leagues ad recently joined Glenn Tamplin’s Romford on loan from Widnes.

In 2011, Everton signed a then 15-year-old Green for a fee that could have risen to £2million, and he was quickly compared to Wayne Rooney.

However, he never made a senior appearance for the club and the midfielder was battling problems with drugs and alcohol and mental health.

The 23-year-old is currently trying to rebuild his career with Boston United in the National League North.

A Premier League player with Wolves, Elokobi started out in non-league and is back there for the 2019-20 season.

The Cameroonian is now on the books of Maidstone United in the National League South, following spells at Colchester and Leyton Orient.

Watt is best known for his time as an Asenal youngster, while a loan spell at Leeds United doesn’t seem that long ago.

However, Watt has been gradually dropping down the leagues and is now in the National League South with Wealdstone.

Two years ago, he was sent off for dissent while playing for Hemel Hempstead Town after the referee asked for his name as to book forward, only to think he was taking the piss when he replied: “Watt.”

🤝 Wealdstone Football Club are delighted to announce the signing of Sanchez Watt! ✍️

Harrogate made the National League play-offs in 2018-19, and they’ve strengthened their squad with the addition of former Premier League goalscorer Stead.

The former Blackburn and Sunderland man arrived after suffering relegation out of League Two with Notts County, but four successive double-figure seasons for a league club suggests he’ll do alright in non-league.

It’s a return to Yorkshire for the striker, who began his career at hometown club Huddersfield Town nearly two decades ago.

However, he’s now down in non-league at the age of 31 after signing with newly-relegated County.

Other players to join the club this summer include Nathan Tyson, a man with more than 100 Football League goals to his name.

Fuller was a fans’ favourite at Stoke City, and he scoring 50 goals in six seasons while also helping them win promotion to the Premier League.

The striker hung up his boots in 2016, but he came out of retirement to play for Nantwich Town in the seventh tier of English football during the second half of last season.

Nantwich recently announced that Fuller was returning to the Dabbers for a second spell at the club.

“Ric’s been training for a month now and is looking sharp, it’s great to have him back. He’s great around the players and with his experience it’s a great fit,” said manager Dave Cooke.

76' GOAL! RICARDO FULLER with a cheeky finish, scoring from a narrow angle through an embarrassed Worsnop!!

He’s 47, in fact, and he’s still going, having enjoyed the south coast so much during his time at Southampton that he’s been knocking around the area for the last decade or so.

Hythe & Dibden spent the last season in the Wessex League Division One, the 10th tier of English football, and the Norwegian international – a team-mate of John Obi Mikel at Lyn some 14 years ago – isn’t ready to retire just yet.

Jennings hit the headlines with a move from Tranmere to Bayern Munich as a teenager but has been back in England since 2013.

After a spell without a club, the winger has been given a new lease on life by Runcorn, playing a handful of games in the 2018-19 season and renewing his deal for the upcoming campaign.

Still just 26, Jennings has spoken publicly of his desire to return to league football.

After making 623 professional appearances during a 15-year playing career, Savage had probably earned the right to put his feet up and concentrate on his media career.

However, the 45-year-old has come out of retirement to play for Stockport Town in the 10th tier of English football. He is expected to be named in the squad to face Oswestry Town later tonight.

This is not a drill…

After eight years – @RobbieSavage8 is coming out of retirement!