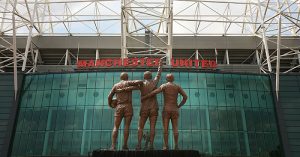 MANCHESTER, UNITED KINGDOM – MAY 29: The statue of Manchester United’s ‘Holy Trinity’ of players stands in front of Old Trafford after being unveiled today on May 29, 2008, Manchester, England. The statue of United legends Bobby Charlton, Denis Law and the late George Best comes 40 years to the day since the club first lifted the European Cup. Charlton, Best and Law scored 665 goals between them for United and between 1964 and 1968, all won the coveted European Footballer of the Year award. (Photo by Christopher Furlong/Getty Images)