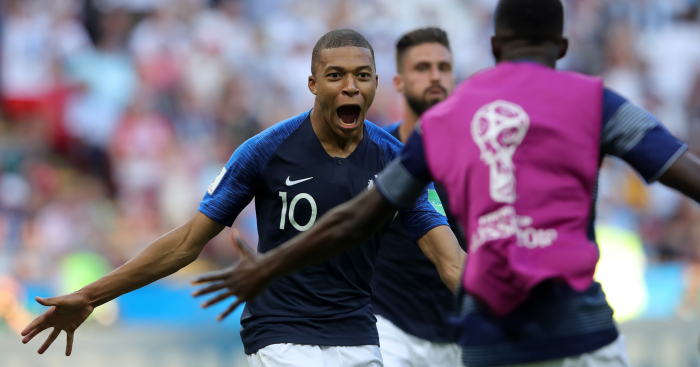 The knockout phase of the 2018 World Cup got off to a thunderous start as wins for France and Uruguay saw both Lionel Messi and Cristiano Ronaldo exit the tournament.

One of the most memorable games in World Cup history was played out as Les Bleus defeated Messi’s Argentina by four goals to three, with Kylian Mbappe earning endless praise from his performance.

The game saw some exceptional goals too, while Belgium made a bit of a hash of a simple tweet, and there’s yet another reason why Gareth Southgate is bringing football home.

We didn’t know where to start with the sheer quality of goals in the France-Argentina match, but this is a thing of pure beauty from the full-back.

A deserved man of the match award, and a brace which puts him in esteemed company.

Kylian Mbappé scores twice and #FRA has a 4-2 lead.

Mbappé joins Pelé as the only teenagers with a multi-goal game in a #WorldCup knockout stage match.

He is the 3rd-youngest player with a multi-goal game at the #WorldCup behind Pelé (twice) and Manuel Rosas. pic.twitter.com/aLVoKzBLSQ

Aside from that wonderful goal by Pavard, and the individual brilliance Mbappe displayed, the French team finally showed what they’re all about with their excellently crafted fourth goal.

But not to forget, Di Maria pulled this out of absolutely nowhere to equalise for Argentina, scoring the furthest-out goal at the World Cup so far (30.2 yards).

What a hit from Angel Di Maria 🚀

Meanwhile, in the other game, that pass…

Did you notice? Five of the 10 goals scored on Saturday were netted by PSG players.

It really is sad that Cristiano Ronaldo and Lionel Messi don’t have better international team-mates.

0 – Neither Cristiano Ronaldo or Lionel Messi have scored a goal in a World Cup knockout match:

Ok, maybe part of him was hurrying the game off, but the good in us thinks there was a moment where Ronaldo genuinely felt for his opponent, whose participation in Uruguay’s quarter final looks in doubt.

🇵🇹 Cristiano Ronaldo helps him off the pitch.

Apparently, Adnan Januzaj can’t wait to come up against WWE wrestler Shinsuke Nakamura in the last 16.

🗣️ @adnanjanuzaj : "@ShinsukeN is a good guy and a great player. I am looking forward to seeing him"#REDTOGETHER #WorldCup
🔜 #BELJPN

We all know it’s coming home.

💪 With Portugal gone, 3 of the 4 teams that have ended England’s World Cup hopes in the 7 times that they’ve got past the group stage since 1966 are now out.