James Bond probably shouldn’t worry about the competition, but football has a long and proud tradition of subterfuge and chicanery – and it’s usually pretty funny.

Football clubs are desperate to gain the slightest of advantages over their opposition and have gone to great lengths to garner information on rivals ahead of games.

We’ve taken a look at 10 times teams have ‘spied’ on their opposition.

Marcelo Bielsa found himself at the centre of ‘spygate’ when it emerged the Leeds United manager had sent a member of his staff to Derby County’s training ground ahead of the two sides’ clash in the Championship.

Derby phoned the police after spotting the man acting suspiciously, with Bielsa – who has previous for this sort of thing – taking full responsibility ahead of Leeds’ 2-0 victory at Elland Road.

Rams boss Frank Lampard, however, was less than impressed by the Argentine’s actions.

“Cheating is a big word,” he said. “If you talk about details and gaining advantages, great and good managers do that. But this one is over the line. It’s not just a toe over the line, it’s a hop, skip and a jump over the line.”

Lampard added: “I’d rather not coach than send people undercover on their hands and knees with pliers and bolt cutters to go and look at the opposition because I respect the opposition.”

Marcelo Bielsa: "I am the only person responsible for this, I did not ask permission from the club. I have been doing it since the World Cup qualifiers with Argentina.

"It's not illegal, we've done it publicly: some people question it, others don't." pic.twitter.com/1yzfj673uO

Given his outrage at Bielsa and Leeds, Lampard will no doubt be shocked to discover that he himself played for a club who routinely sent staff to opposition training grounds in the hope of gaining some kind of advantage.

Indeed, Andre Villas Boas told The Daily Telegraph in 2011 that he would travel to training grounds “incognito” as a scout for Jose Mourinho, helping set up a Opponent Observation Department for the Blues.

Lampard must be livid.

Andres Villas-Boas on his scouting role at Chelsea. Let’s not pretend this hasn’t happened before pic.twitter.com/JlT2eQYYMx

In 2009, The Mirror reported that Sir Alex Ferguson’s helicopter had been spotted flying over Manchester City’s training ground ahead of a Manchester derby.

The story suggested “City officials wondered if they were the victims of a spying mission, with their arch-rivals wanting to know any last-minute secrets”.

To be fair, tactics seemed to be thrown out of the window as United beat City in a 4-3 thriller famous for Michael Owen’s last-gasp winner.

In December, Werder Bremen were caught trying to spy on Hoffenheim by flying a drone over their training ground.

But Hoffenheim boss Julian Nagelsmann was distinctly not arsed.

This December, Hoffenheim caught a Werder Bremen scout spying on their training with a drone. Werder apologised. Hoffe coach Nagelsmann: "I'm not really angry at the analyst doing his job. It's commendable if they're doing everything they can, trying to spy on the opposition."

In the midst of the Bielsa furore, a number of former players took to Twitter to suggest the scandal was actually much more common than we might realise.

Gary Taylor-Fletcher in particular provided a wonderful story of Huddersfield’s kitman being rumbled while hiding in the ceiling at half-time of a clash with Lincoln.

Nothing new this spygate lark. I remember a certain game for Lincoln away against Huddersfield before I signed there. Big Keith was giving his halftime talk and one of the polystyrene tiles cracked and fell down. The sight of Brooky the Kitman trying to back up was hilarious. 😂

@Mazza_78 nothing new this spygate lark. Remember Huddersfield away when their Kitman was hiding in the ceiling. 😂

Neil Warnock and Stan Ternent famously failed to see eye-to-eye, with Warnock suggesting he “wouldn’t p*ss on him if he were on fire” in his autobiography.

But in 2001, Ternent tarnished Warnock’s good name by accusing the then-Sheffield United boss of sending a member of staff to listen in to his half-time team talk as the Blades beat Burnley 2-0 to end the Clarets’ play-off hopes.

“At half-time Neil Warnock sent someone down the corridor listening behind our dressing room door to my half-time team-talk,” Ternent said. “That’s cheating.

“That is the lowest of the low. If that’s the sort of lengths that managers have to go to to win football matches I’d rather be cutting my grass.

“I need to say that and that is wrong. I’ll be writing a letter to the FA and to the Football League and reporting him for that because that is not in the true spirit of the game in my book.

“And if I was chairman of a football club he wouldn’t be working for me, I can assure you of that.”

Warnock refuted the allegations and had his own say on the matter.

“I deny it totally. Stan says a lot when he’s not in a very good mood. I don’t have to do things like that to win a game of football. He can report me if he wants, but I know I’ve done nothing wrong,” he said. 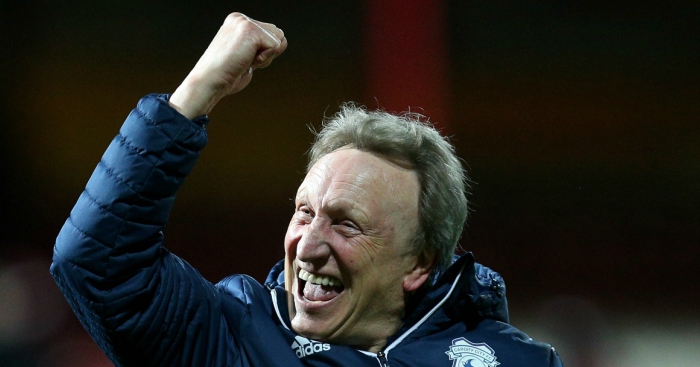 READ: 13 of the best Neil Warnock stories: ‘Get back in your f*cking cupboard’

South Korea players were forced to train wearing different squad numbers in the summer after a member of Sweden’s backroom staff, Lars Jacobsson, infiltrated their training camp ahead of the two sides’ World Cup clash.

Sweden boss Janne Andersson apologised for the incident but refused to be drawn on allegations that Jacobsson had rented a house across the road from South Korea’s training camp in Austria.

“We switched [the numbers] around because we didn’t want to show everything and to try to confuse them,” South Korea boss Shin Tae-yong said.

“They might know a few of our players but it is very difficult for westerners to distinguish between Asians and that’s why we did it.

“All coaches probably feel their opponents are always spying on them. I think it’s perfectly natural that we all try to get as much information on each other as we can.”

Whether or not the team co-ordinator providing by the Norwegian FA was actually spying on England ahead of a World Cup qualifier in Oslo in 1993 is actually irrelevant in this story.

England boss Graham Taylor was so convinced, he switched training locations to a secret military sports centre on the eve of the game.

Unfortunately, the new training ground just so happened to be right next to the house of the chief sports correspondent of Norway’s biggest selling newspaper, VG.

As a result, details of the secret training session, accompanied by photographs, appeared on the front page of the paper the following day as England went on to lose 2-0.

Didier Deschamps’ side were actually the victims of spying at the 2014 World Cup, although it remains a mystery who the guilty party were.

Ahead of the tournament – in which they were drawn in a group containing Honduras, Switzerland and Ecuador – France had a training session interrupted by a drone hovering above the pitch.

“Apparently drones are used more and more,” Deschamps said. “We don’t want intrusion into our privacy. It’s hard to fight.”

German manager Reinhard Fabisch became renown in Zimbabwe as manager of the national side, leading what became known as the ‘Dream Team’ which contained the likes of Peter Ndlovu and Bruce Grobbelaar.

And Fabisch would enlist local coach Benedict Moyo to travel on “spying missions” to the countries of their upcoming opponents and gather as much information as possible.

“I enjoyed that role and executed it to the best of my abilities and reported back to Fabisch after every mission,” Moyo told B-Metro Sport in December.

“And he used that information to put together a game plan that he would use against those teams when they played the Dream Team.

“He was a visionary coach who loved the game, was down to earth and taught local coaches all there was to know about the game.”