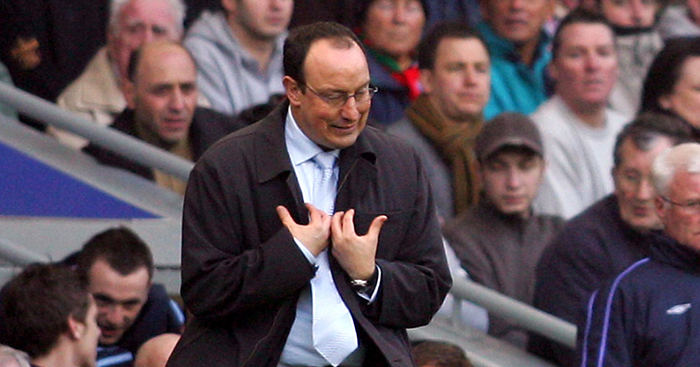 Occasionally we’ll witness a moment in football that can’t be explained away normally, to the point that it feels as though there must be some other magical force involved.

Sometimes there’s a clear magician at play, a footballer who produces a piece of skill you’ve never seen before or contorts the ball in ways you didn’t think possible.

On other occasions things are a bit different, but no less eye-catching. We’ve picked out a few standout magical moments here.

The layers to this.

He must have stooges working on this behind the scenes – no way this is a one-man job.

Making yourself disappear is always a popular act for a magician.

But has anyone ever done it at the side of a football pitch like Tim Sherwood? Now that’s magic.

Tim Sherwood vanishing is one of the biggest mysteries in football! ✨ #FootballMagician

Santi Cazorla has always been a magician on the pitch so it made absolute sense that Villarreal hired a magician to make him appear out of nowhere after he’d re-signed for the club.

As player unveilings go, it was pretty ridiculous. But it was also pretty impressive.

As if by magic … Santi Cazorla unveiled at Villarreal by a magician https://t.co/qHBOb7by83 pic.twitter.com/8HBi2okCHd

Clapping to turn off a light is one thing, but imagine being able to simply wave your hand at any light to immediately make it go off.

Exeter City manager Matt Taylor can do it.

Exeter coach Matt Taylor can turn a floodlight off by waving his hand! ✨ #FootballMagician

Josh Murphy chops an assistant in half

Now we get to the other definition of magic.

This is like playing a game of three-card monte.

Your eyes are drawn one way, then the other, then back again, to the point you don’t know which way is up and which way is down.

All we can do is watch back in awe without attempting to rationalise. We’re up to 100 watches already.

Perhaps the best new innovation in penalty taking since the Panenka (just kidding, there’s no ‘perhaps’ about it)

The brilliance of this comes from the fact that, if the goalkeeper is aware of the process, you’ve already lost. It’s like making the Statue of Liberty disappear.

Sometimes seeing the process isn’t actually enough to win us over. Even with all the information in front of us, there’s a difference between ‘how did he do that?’ and ‘HOW DID HE DO THAT?!’

Enter Kerlon, and the famous seal dribble. If it was easy, everyone would be doing it. Sometimes the key to magic is playing with expectations as well as with reality.

Arthur Masuaku pulls a rabbit out of a hat

We’ve seen Arthur Masuaku beat a man, only to go back so we can beat him for a second time.

With that in mind, this shouldn’t surprise us, and yet… just look at it.