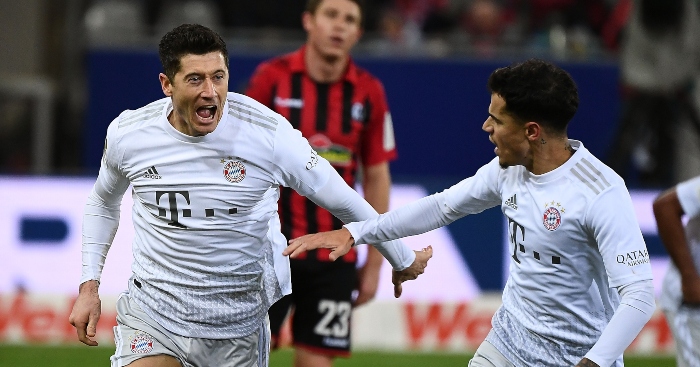 Robert Lewandowski scored his 30th goal of the season for Bayern Munich in their 3-1 win over Freiburg on Wednesday.

That’s not a fudged ‘club and country’ stat: all of the goals have come for Bayern in the league, domestic cup and Champions League.

We’ve compiled some of the stats which show just how good the Polish striker has been.

– His 30 goals have come in 24 games. The first time Lewandowski hit 30 in a season, for Borussia Dortmund, it took him 47 appearances to reach that total.

– The striker has played 1,984 minutes, meaning he has provided an average of one goal for every 66.1 minutes on the pitch.

– 30 goals is just two shy of the highest total team-mate Thomas Muller has ever recorded in his career.

– He has scored hat-tricks in three different competitions: against Schalke in the league, against Red Star Belgrade in the Champions League and for Poland against Latvia in Euro 2020 qualification. All came away from home.

– Less than half of Lewandowski’s goals this season have come at the Allianz Arena: he has 13 Bayern goals at home and 17 on the road.

– Despite his goalscoring exploits, he has just one assist in 24 games across all competitions.

– He has 19 Bundesliga goals already this season. The only player to score more than that in the entirety of last season, or the season before that, was… Robert Lewandowski

– If you add together Cristiano Ronaldo and Lionel Messi’s league tallies for the season, Lewandowski is just three behind.

– Since the beginning of 2019, Lewandowski has scored 48 goals in 47 games. Ridiculous.