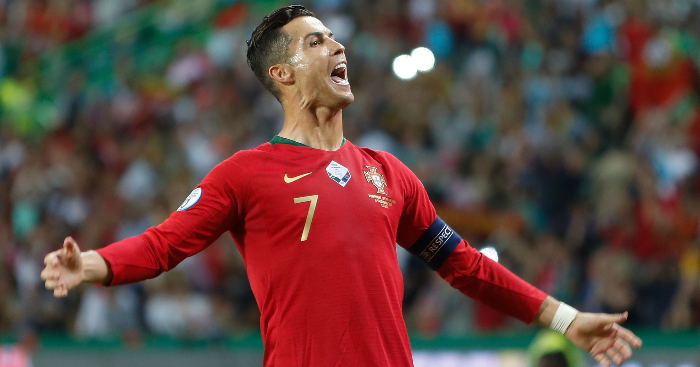 As seems to be the case pretty much anytime he takes to the field these days, Cristiano Ronaldo achieved yet another first in Portugal’s 2-0 Nations League win over Sweden.

It was only last month that we published 11 stats about Ronaldo’s remarkable 2019-20 campaign for Juventus, but here we are again with yet more records and landmarks to add to the list.

He is not human.

– Ronaldo has become the first European player to score 100 international goals, moving to 101 with a brilliant brace against Sweden.

– Ronaldo is now just nine goals behind Ali Daei, who holds the world record for the most international goals (109) for Iran.

– Ronaldo’s total of 101 is as many as the all-time leading goalscorers of France (Thierry Henry, 51) and the Netherlands (Robin van Persie, 50) combined.

– Pauleta and Eusebio, Portugal’s second and third highest goalscorers of all time, have 13 fewer international goals combined than Ronaldo.

Cristiano Ronaldo's two goals against Sweden were his 24th brace for Portugal.

He has more braces than any other current Portugal player has goals. 😱 pic.twitter.com/RIlzDvul42

– Ronaldo moved past 700 career goals last year, joining a select club with only five other players in history to have scored that many: Brazilian greats Pele and Romario, plus Josef Bican, Ferenc Puskas and Gerd Muller.

– Despite turning 35 midway through the season, Ronaldo scored 37 goals for Juventus in 2019-20, the most any player has netted in a single campaign for the Turin giants.

– He became the oldest player, at the age of 35 years and 166 days, to score more than 30 goals in one of the five top European leagues since Ronnie Rooke did it for Arsenal in 1948.

– Ronaldo passed 50 goals in Serie A during the season on just his 61th appearance. That’s quicker than any other Juve player and the second quickest in history.

– He also became the first player to reach 50 goals in the Premier League, La Liga and Serie A.

– He has reached double figures for 15th consecutive seasons, something no other player has done in Europe’s top five leagues. He hit more milestones in 2019-20 too.

Can you name the 31 players to score 25+ goals in the Champions League?