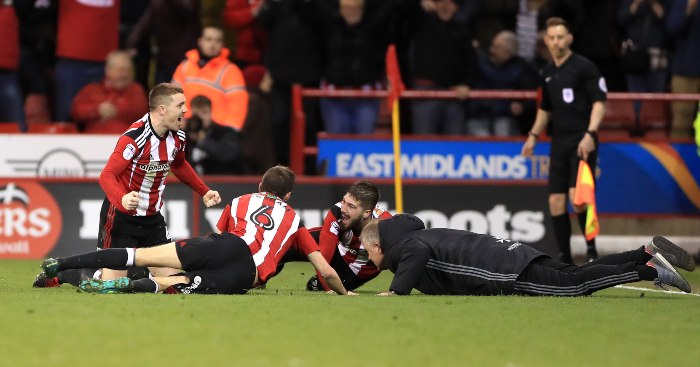 A manager with old school sensibilities combined with a modern football brain, Chris Wilder has been a breath of fresh air in the Premier League as Sheffield United boss.

Not only are his team always good value to watch on the pitch, but Wilder is often extremely good value off it too, whether that be having a laugh, talking straight or just proving himself to be a normal, decent bloke.

We’ve rounded up some of Wilder’s best and funniest moments. If you really want to fall down the rabbit hole we seriously recommend spending some time trawling through the No Context Wilder Twitter account.

This is worth a watch for John Fleck’s beauty alone, but Wilder joining in with the belly-slide celebrations is where it’s at.

Superb goal from Fleck yesterday evening. Also, Chris Wilder is a passion merchant, and I love it. #twitterblades pic.twitter.com/oXAAu6W5CU

The pressure of derby day can affect people in different ways, so it was understandable if Wilder was feeling a little tense ahead of managing in a Sheffield derby for the first time in 2017.

“Whoever thought about putting our training ground right in the heart of Sheffield Wednesday territory wants shooting,” he later told the At Home With Colin Murray podcast.

“It was quite funny when we played them in the Championship because there was a drone outside my office.

“I opened the window, ‘This is the effing team, if you want the effing team.’ It was like Bielsa and I went through the team because I thought they were having a spy on us.

“Then someone said, ‘It’s just someone doing some investigations for some measurements and stuff like that.’

“The idiot manager, paranoid as hell before his first Sheffield derby, opening the window and shouting.”

Speaking of celebrations, something tells us Wilder may have enjoyed himself after Sheffield United secured promotion from League One.

Ahead of Sheffield United’s trip to Liverpool, Wilder raised a few eyebrows when he got his team to train in the shadows of Anfield at Stanley Park.

Sadly, there was a bit too much dog shit around for Wilder’s liking.

We can only admire his dedication to punctuality.

Wilder was understandably angry at Hawkeye’s failure to award Sheffield United a goal after the ball crossed the line in their 0-0 draw with Aston Villa last season, but he expressed his anger in a typically Wilder manner.

"I've just seen Del Boy with a Hawkeye watch on"

We’ve all got that mate who once had trials, and we’ve all wanted to tell them to shut up.

"You deserve to be in the pub and have the career that you've had, not the one that Jamie Vardy's got – so shut up." 🍻

🗣"When we landed in the PL, Eden Hazard was going to Real Madrid I said I'd give him a lift to the airport, I hope Bale stays, great golf courses there, don't make it harder for us!" 😭

It’s always refreshing to hear someone respond to a question with the answer: “I haven’t got a clue.”

Chris Wilder, I salute you.

Here you go, 11 minutes of gold, featuring rants on Patrick Bamford, nights out in Sheffield, still being charged full price by his barber, and an awful lot of chat about Peroni.

Where are they now? Sheffield United’s XI from Chris Wilder’s first game