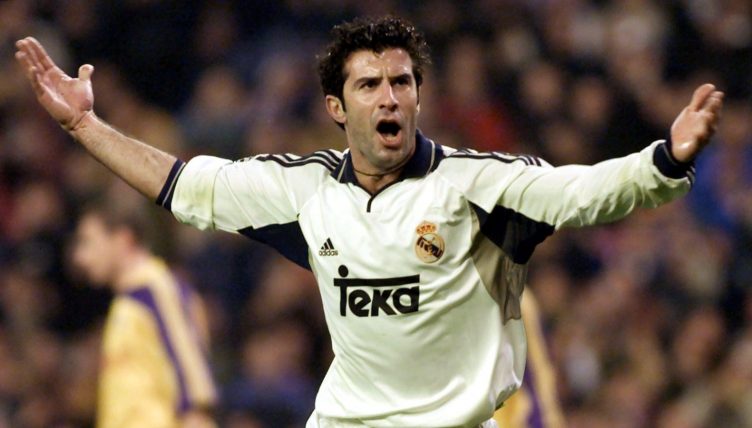 Luis Figo captured the hearts of many fans during his time at Barcelona, Real Madrid, Inter Milan and with the Portuguese national side.

After breaking through at Sporting, Figo quickly progressed through some of Europe’s top clubs to have one of the best-looking CVs in football.

Figo joined the Sporting Lisbon academy at the tender age of 11 and rose through the youth ranks to make his debut for the senior side on April 1, 1990, coming on as a substitute in a 1-0 home victory over Maritimo.

The Almada-born youngster had to wait until the 1991-92 season to score his first goal for the Portuguese giants, though, as he scored versus Torreense to equalise in a 2-1 win.

Figo was the headline name of Portugal’s “Golden Generation” following his nation’s triumph at the FIFA U20 World Cup in 1991.

That year he also made his debut for the senior side during a 1-1 draw against Luxembourg.

The Portugal international’s new-found stardom took him to Barcelona for £2.25million in 1995 following the collapse of a move to Italy. Conflicting reports at the time suggested had signed for both Parma and Juventus.

Figo told FourFourTwo in an interview: “It was the only proper contract I really signed [Parma] – what I’d signed with Juve wasn’t supposed to be a valid contract.”

According to Figo, Luciano Moggi, who was chief managing director of Juve at the time, managed to get him banned from Italian football for two years.

Not many Barcelona fans would care to admit it now, but Figo was once a hero in Catalonia.

This brilliant goal he scored against Real was arguably the best of his 45 for the club.

Portugal were drawn in a tough group for Euro 2000 alongside England, Germany and Romania.

One of the best memories of their tournament was Figo’s sublime strike that set Portugal on their way to a 3-2 comeback victory over the Three Lions.

They won the group but were knocked out in the semi-finals.

Remember that strike in the comeback against England at Euro 2000?pic.twitter.com/35Ha5ftJjT

It caused shockwaves throughout football when Figo completed his £37.2million world-record move from Barcelona to Real Madrid.

The transfer signaled the beginning of the Galactico era at the Santiago Bernabeu and left Figo facing the wrath of the Barcelona fans.

His initial return to the Camp Nou on October 21, 2000 was bad enough with banners around the stadium calling him a ‘Traitor’ and ‘Judas’ among plenty of other things.

Missiles also rained down from the stands but Figo, who was Madrid’s regular corner taker, wasn’t given the night off set-piece duty to avoid getting too close to Barca’s fans.

However, Figo’s second time back at the Camp Nou was an even less pleasant experience for the Portuguese winger. This time he would take corners and throw-ins resulting in a barrage of golf balls, lighters, cans and other missiles before the referee was forced to take the sides off the pitch.

One of the most iconic moments in any Barcelona-Real Madrid clash was the image of a pig’s head thrown onto the field in the direction of Figo.

At the end of 2000, Luis Figo wrote his name in history by becoming the first Portuguese player since Eusebio in 1965 to win the Ballon d’Or.

Figo scored three goals in 10 appearances as Real Madrid lifted the 2001-02 Champions League, although the final will always be remembered for Zinedine Zidane’s wondergoal.

Figo left Real Madrid in the summer of 2005 after his contract ran down at the Bernabeu, before joining Serie A side Inter Milan on a free transfer.

His best and most important goal came during extra time of their 2006 Supercoppa Italiana final against Roma. The free-kick flew into the back of the net and gave Inter a 4-3 victory.

He may not have won anything during his international career, but Figo captained Portugal to their best World Cup finish since 1966 – an era in which Eusebio was king.

His side won their three group matches, beat the Netherlands in the last 16 and defeated England on penalties. They eventually succumbed to France, before a 3-1 loss in the third-place play-off against Germany.

Figo ended his international career with 127 caps and 32 goals. Not bad at all.

READ MORE: Recalling Luis Figo’s four years at Inter when he was accused of killing a cat