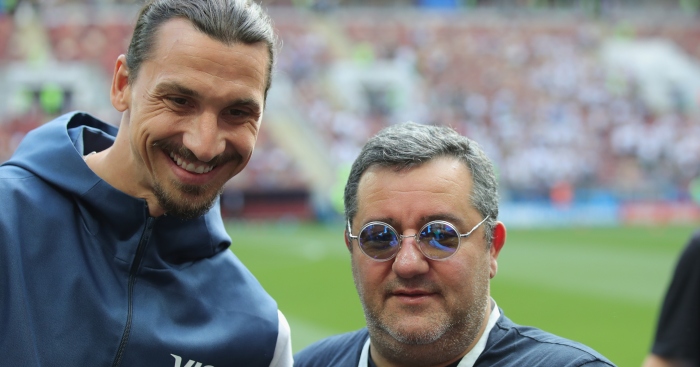 Mino Raiola boasts Arsenal and Manchester United stars among his impressive roster of clients, and is regarded as one of football’s super agents.

Raiola doesn’t shy away from controversy, though, often taking on more trouble-stirring clients such as Zlatan Ibrahimovic and Mario Balotelli.

And with a number of long-running feuds and regular spats, Raiola has never been afraid to speak out on behalf of the players he represents, producing some bizarre and brilliant quotes in the process.

Raiola hit back on Twitter, saying Scholes “wouldn’t recognise a leader is he was in front of Sir Winston Churchill”, before then bizarrely suggesting that Scholed should become United’s sporting director and sell Pogba.

Some people need to talk for fear of being forgotten. Paul Scholes wouldn’t recognize a leader if he was in front of Sir Winston Churchill. @paulpogba

Raiola and Ibrahimovic have upheld an ongoing spat with Pep Guardiola and Johan Cruyff, with digs regularly flying round the circle.

“You bought a Ferrari and drove it like a Fiat,” was one particular quote of Zlatan’s when discussing Guardiola’s treatment during his spell at Barcelona.

After one particular rant from Cruyff, Raiola retorted: “I think Cruyff and Guardiola can go to a mental hospital together, shut up, sit there and play cards together. They would do football and Barcelona a great service.”

When Pogba initially left United to join Juventus on a free transfer, Fergie accused Raiola of engineering the Frenchman’s move away from the club.

“Maybe Ferguson only likes those who obey him,” the agent responded. “From his quotes, I understand that Ferguson still doesn’t have a clue who Pogba really is.”

We’re just going to leave that there.

Reports circled stating that Juventus wanted €120m and Toni Kroos if Real Madrid were to purchase Paul Pogba, to which Kroos’ brother Felix responded saying that Kroos was worth the €120m and Pogba instead.

Back to Balotelli, and through no provocation, Raiola decided to express his disappointment that his client had been shown the exit door from Klopp’s Liverpool.

“At the end of the day the Liverpool directors admitted Klopp was unfair,” Raiola claimed in an interview with La Gazzetta Dello Sport.

“I won’t judge him as a coach, even if for me he isn’t a great tactician. It’s not enough to say Klopp was unfair: he was a piece of sh*t.”

Dont want to rain on any parades etc, but Klopp hates Raiola. The notion that #LFC would sign two of his players (#Donnarumma & #Kluivert) is bonkers. The notion that they "met for a chat" as published by @IExpressSports this week, is even more unlikely.

“Sepp Blatter is a demented dictator.” We can get on board with that one.

“It makes me deeply sick just to think about Blatter being re-elected,” he added, when announcing he would run against him for the presidency.

“Do you want a dictator as president of FIFA or a democracy? Even a 15-year-old kid knows that the only good thing about FIFA is the video game,” Raiola blasted.

“I’ll find five FAs to back me,” he added. “It’s incomprehensible that some FAs still vote for Blatter. If people vote Blatter, they are voting North Korea, if they vote me, they are voting South Korea.”

Continuing their feud, Raiola decided to emphasise that he would not allow any of his players to join Guardiola’s City, having branded the manager a “scumbag”.

“Pep Guardiola, the coach, is fantastic. As a person he’s an absolute zero. He’s a coward, a dog,” Raiola said.

“He’s a classic priest. ‘Do as I tell you – don’t do what I do….’ If Manchester City win the Champions League this season it will emphasise what a good coach he is – but I’ll hate it.

“I went for him that night in the corridors at Wembley [after Barcelona beat Manchester United in the Champions League final in 2011] – only Adriano Galliani, AC Milan’s chairman, stopped me. Lucky for Guardiola.”

Raiola was left scathing after striker Balotelli was left out of the Italy squad in March ahead of friendlies against England and Argentina.

“I would restart from the German system,” he said. “We have a system similar to the English one, where the coach works as a manager, but Di Biagio isn’t the right person for that.

“In other nations, when the national team plays, it’s a party but for us it’s a reason to fight. There’s no plan or identity, all we do is change the manager.

“The national team should be represented by the best, so if the best don’t go then we don’t understand the criteria.”

"This Italy national team is awful"

Yet his client, Mario Balotelli, hasn't made the squad…

One client Raiola hasn’t persuaded to make a move is Milan goalkeeper Donnarumma, who extended his contract at the Italian club despite interest from a number of suitors – but he’s not exactly happy about that.

“Donnarumma made a choice which is to stay at Milan, and I respect that,” Raiola said.

“However, If he was to ask me to leave I would immediately work on it because there are important requests.

“In fact if it was up to me Gigio would leave Milan.”