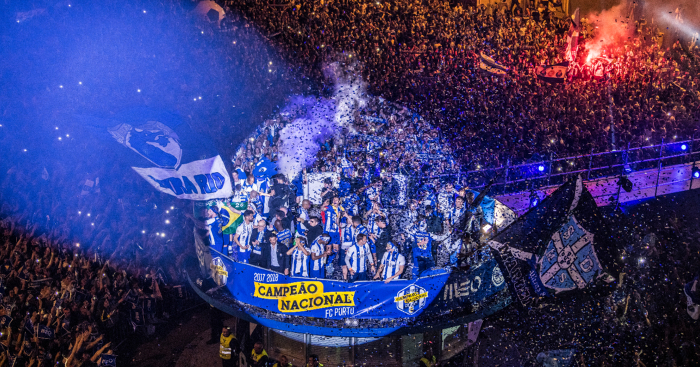 As well as Manchester City’s Premier League and Barcelona’s La Liga, titles have been decided around Europe and the world in recent weeks.

And with any victory comes appropriate celebrations, be it an open top bus parade, a ceremony in the stadium or even a trip down the pub.

We’ve taken a look at some of the best title celebrations and the best ‘scenes’ that they have provoked from the end of this season.

The only South American country to not run their league in the calendar year, Boca have now won both titles since the switch to the ‘European calendar’ was made.

After winning the league at an away ground with visiting fans banned, Boca returned to La Bombonera to celebrate with the fans, who gave them a true hero’s welcome.

Around 250,000 people turned up to the Estadio do Dragao for Porto’s title celebration match, creating a stunning atmosphere.

On a packed out victory parade through Turin, one supporter launched a vuvuzela/air horn towards the open top bus, with former Arsenal goalkeeper Wojciech Szczesny pulling off a belting catch and carrying on as if nothing happened.

Once a keeper, always a keeper.

Their first title in 32 years produced some incredible scenes.

After winning their fourth Serbian SuperLiga in the competition’s 12 years, the sheer volume of flares eventually took its toll, and the open top bus was burnt down.

The club picked up their 24th Eredivisie title this season, and promptley jumped about en masse in Eindhoven’s town square.

This is good if just for the “eat sleep treble repeat” slogan on the front of the bus.

PSG would be the first team to celebrate a Champions League title in Space if their Ligue 1 celebration is anything to go by. 🎆 pic.twitter.com/A71wL9qwGH

Okay, so not a title win, but Eintracht lifted their first major trophy in 30 years when they won the DFB Pokal this weekend.

Watch: Frankfurt bench spills onto the pitch as DFB Pokal winner is scored