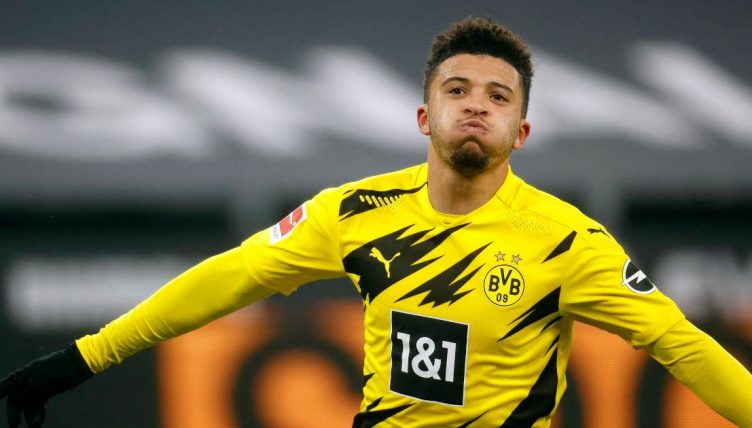 Jadon Sancho is closing in on a move to Manchester United – and the young forward has attracted plenty of other admirers in recent years.

Since joining Borussia Dortmund from Manchester City in 2017, Sancho has developed into one of the best young players in world football.

We’ve rounded up some of the best quotes on the winger from his coaches, team-mates and pundits.

Sancho is known as a Manchester City academy product, but he actually came through Watford’s youth system before moving north at the age of 15.

“Jadon was someone who needed to be challenged,” Lancaster, his academy coach at Watford, told Sky Sports in 2018. “Some boys are scared of moving up a year, but he embraced it. That was one thing that separated him from the others.

“As a coach you can measure how many passes they make, how many shots they take, how far they run, but it’s the immeasurable qualities that make the difference.

“I asked him, ‘What’s the dream?’ He looked me in the eye and said he wanted to play for one of Europe’s top clubs and represent his country to make his family proud.”

The former England youth coach worked with Sancho with the Three Lions’ Under-16 side and made a lofty comparison for the youngster.

“Provided he doesn’t become restricted he could be our Neymar-type player – in terms of being unpredictable, playing on that left-hand side,” he told The Guardian in 2018. “And he’s flamboyant, entertaining to watch. But like Neymar, he’s effective with it.

“In most games, he’ll create something – it’s not a beauty contest. He’s not on the pitch flicking it over someone’s head for the sake of it.”

Jadon Sancho has been killing it in England training 🔥

He even sold the camera man 😳😅

The Dortmund sporting director has regularly waxed lyrical about Sancho, most notably prior to the Champions League clash with Tottenham in 2019.

“I’m not surprised about his performances,” he said. “I’m surprised how fast he managed to get on this senior level because, before, he only played in youth teams.

“And also his stability in performing well. During last autumn he nearly played each game and always at a high level. For this age he can still play in our Under-19 team!

“He’s still a youth player in our terms – that’s unbelievable. He’s very robust, very strong. For his age, he is outstanding.”

The former Ballon d’Or winner revealed that Sancho caught his eye from the first moment he saw him in an England Under-17 match.

“I wanted to know more about this wonderful guy I’d seen playing. I didn’t know him at all, or who he played for, just his surname,” he told the Sun in 2018. “But from that moment I could see he was fantastic. I only needed to watch for 15 minutes to know that.

“He’s a natural footballer. A player who has everything: fantastic speed, great technique, a good eye for his colleagues and that key pass. For me he is a perfect player.”

“He had this flair, creativity and imagination and a bit of street football within him,” Burton, City’s youth coordinator, told the Daily Mirror in October 2018.

“Sometimes he goes off the cuff. What we gave him was a bit of discipline within his play but without hopefully killing his flair.

“We surrounded him with better players that pushed him and put him in an environment that probably got him closer to seeing what professional football looked like.”

When asked about Sancho after the winger became the youngest Englishman to score in Bundesliga, Reus told Kicker: “How he controls the ball to set up the 3-0, that shows everything.

“I wasn’t that far at his age. So much respect!” 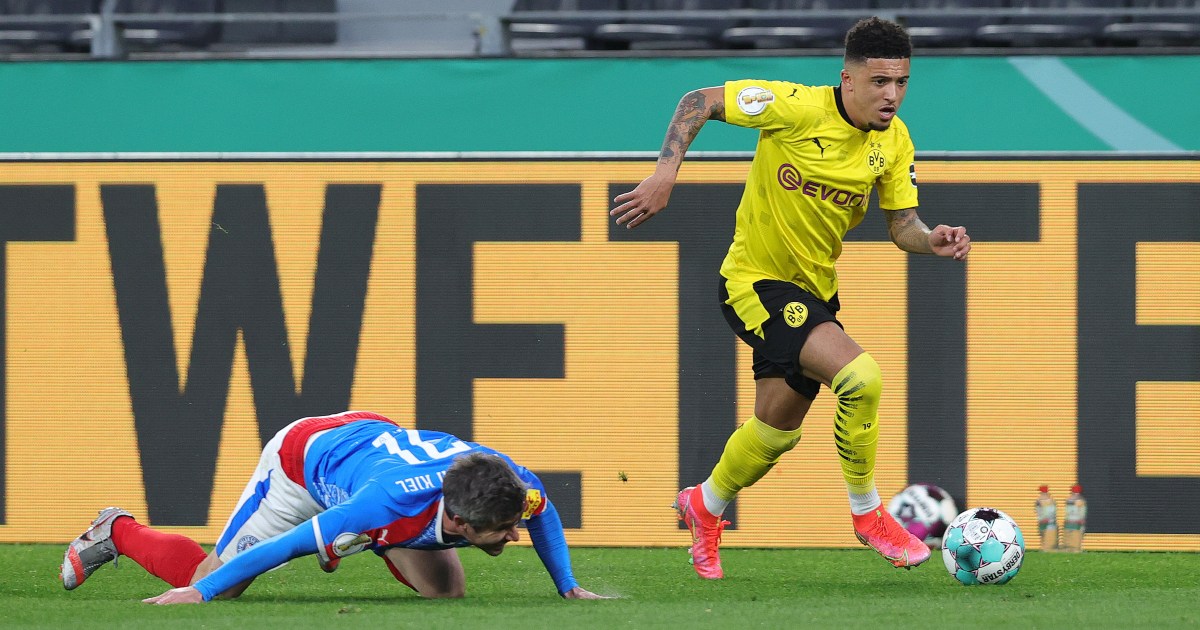 READ: Defenders are now so scared of Sancho they just fall over when he’s near

After Sancho provided two assists in a 4-0 victory against Bayer Leverkusen in April 2018, Philipp expressed his admiration for his team-mate.

“His acceleration is brutal, he can do a lot of damage with his quick changes of direction,” he said. “Maybe he’s still a bit too playful. He still has a lot to learn and work hard, but for an 18-year-old, that was a special performance.”

“When I saw Jadon and Reiss I thought, ‘These boys are mad.’ Jadon was just making people look stupid. The nutmegs, the skills. Some were outrageous,” he told the Daily Mirror in 2018.

“Jadon and Reiss were both phenomenal players. You knew they would go into the professional game. They were different from anything out there and had this ability to manipulate the ball at a young age.

“At times, because of their friendship, it was telepathic between them on the pitch. Jadon was fearless on the pitch when he was in his groove. Growing up in that area of Southwark you had to have something about you to be able to play.”

Ferdinand is another member of the media to regularly heap praise on Sancho.

“This kid is the truth,” Ferdinand told BT Sport in October 2018. “He’s got everything. He’s got skill, pace, tenacity, desire, commitment, he gets goals. He’s top assist man in Europe at the moment. He’s potentially the best talent we’ve got bar none.”

Just like Sancho, Hargreaves left a Bundesliga side to move to Old Trafford.

“His potential is off the charts, it really is,” Hargreaves said in May 2020. “The impact he has had everywhere he has played has been quite astonishing.

“I think a lot of people look at young players taking time to develop but if you look at players like Wayne Rooney and Jadon, the great ones, the exceptional ones just figure it out.

“I think Jadon, like Wayne, you put him in the middle of whatever the league is, in any country, and he thrives.

“His confidence is off the charts he never looks fazed. Even in the game in the Champions League against PSG it’s almost like he relished that game against Neymar.

“I covered that game and he played better than anyone on that pitch even Mbappe and Neymar. His level is exceptional and he thrives on creating and scoring goals.

“If you see the way football has become very structured it’s very unique to see a player like him – what’s that old saying? If you are good enough you’re old enough and I think Jadon typifies that.”

When Jadon Sancho sat Harry Maguire down at England camp.

He'll have to face him every day at Man United training 👀 pic.twitter.com/s2fUr4Kmyn

Another gem from Micciche in his interview with The Guardian.

“Jadon did a lot of his learning on the street through informal play. People think academies produce these players – they don’t.

“They do a lot of things – they support, develop, nurture. But they inherit 90%, 95% of the player, even when they join at nine. It’s about the other five, 10% – that can be crucial, as the player is either completed or the 90 shattered.

“The analogy I use is ‘bricks in the wall’. If 10 bricks are needed to make the structure and the player is the wall, when they come to you several bricks are in place and it’s about filling in the missing ones.

“With Jadon, if one of his bricks is creativity and you tell him he can only play one or two-touch you take that brick away.”

“Jadon Sancho is a superb player. He’s a menace with his technique, speed and dribbling,” the Bayern Munich forward told Sportbuzzer in 2020.

“There are other players in the Bundesliga with those qualities, but they don’t have his exceptional decision making.”

The Brazil international came up against Borussia Dortmund in the Champions League in 2020 and admitted that he is a big fan of Sancho.

“Borussia have players that can make the difference,” Neymar told Sky Sports News. “Jadon is a player that I really like to watch play and he is a great player with plenty of quality.

“Borussia Dortmund is a team with plenty of quality players. They have a special player, who is new but who is very good whose name is Sancho.”

Haaland joined Sancho at Borussia Dortmund in January 2020 and has enjoyed playing alongside the England international.

Sancho and Haaland combine to produce yet another beauty for Dortmund! 👌 pic.twitter.com/Qsl4Ucc0VU

After impressing at Birmingham City, Bellingham decided to follow in Sancho’s footsteps by joining Dortmund in 2020.

“Sancho is really very important to me,” Bellingham told Kicker in October 2020. “Not just because he comes from the same country as me or because he speaks the same language.

“Even more important is how he puts his arm around me, but also around the other young players…how he strengthens us in our abilities, gives us confidence. He’s a great role model for English players my age. To get praise and encouragement from him means a lot to me. That helps me a lot.”

The Liverpool captain has played alongside Sancho with England and will now be playing against him in the Premier League.

“A lot of people are speaking about him,” Henderson told Rio Ferdinand’s YouTube channel in 2020. “He is a top player, a special player, that in training he has got something different and he’s sharp and able to get past players with ease.

“Also he’s got a good head on his shoulders, he loves football, wants to improve, listen and learn so if he just continues on that path the sky’s the limit for him really.”

Ferguson was full of praise for Sancho ahead of England’s game against Scotland at Euro 2020.

“I think a lot of Jadon Sancho, with his one-on-one duels, as an assister and scorer, he is extremely dangerous,” Ferguson told SportBild. “He has so much potential, he helps the team. That’s why he’ll be valuable to England over the course of the tournament.”

“It would be good, Sancho’s a great player and he’s like a new generation player,” Rashford said in 2020 when asked about the idea of playing alongside Sancho.

“It’s definitely exciting to watch him become the player he’s becoming. Hopefully, we can play together, that would be good. He plays off the cuff, he’s creative and imaginative, these are the things you need to be world-class.”

And the man himself?

“The street football will never leave me,” Sancho said in an interview with Dortmund’s YouTube channel in 2019. “I grew up with it.

“What I learned from street football is what I have always been doing. It is very different. Football is about having fun.”