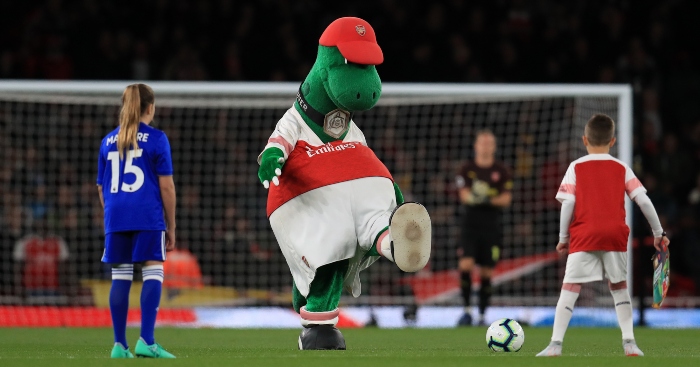 Of all the losses to normality we have endured during this pandemic, this one may just be the most difficult to bear.

On Transfer Deadline Day, news broke that beloved Arsenal mascot Gunnersaurus was being released by the club after 27 years service – rumours of a late approach by West Ham remain unfounded. Despite having no thematic link to Arsenal Football Club, the reptilian prince entranced a generation of young Gunners supporters and managed to capture the hearts of a fair few neutrals too.

A relationship once memorably immortalised by Guardian cartoonist David Squires, the two cornerstones of Arsenal Football Club share a precious moment on the training field.

20 seconds of the greatest video to ever exist. ❤️ @Gunnersaurus pic.twitter.com/EP0quBoz6Z

Not even Andrea Pirlo would dream of attempting a Panenka on Gunnersaurus.

Gunnersaurus could do it all 🙌 pic.twitter.com/DIsqo5MVKR

But, with all this practice, is it any surprise our green friend is the new Buffon?

Still doing half time penalties at mine if anyone's interested? 🧤 pic.twitter.com/L5P4V9XlmL

He’s not bad with his feet either.

It’s not hard to imagine Gunnersaurus being a cool customer on the dancefloors of Islington’s finest establishments.

He can also be relied upon for his chameleon-like acting skills.

Many birthdays have been curtailed this year, but with friends like these who needs fancy celebrations?

🎈 #GunnersBirthday might be in lockdown, but that doesn't mean he can't see his friends 😊 pic.twitter.com/wxKSNDD3kk

We’d have loved to be a fly on the wall in the meeting where this photo op was conceived.

Gunnersaurus is a creature of many talents – here, he shows us his dedication to keeping a clean sheet.

Sad when my Arsenal duvet cover has to go in the wash 😞 pic.twitter.com/r01m0ofszX

Eschewing the craze surrounding Tiger King, Gunnersaurus is clearly a dinosaur that knows his own mind.