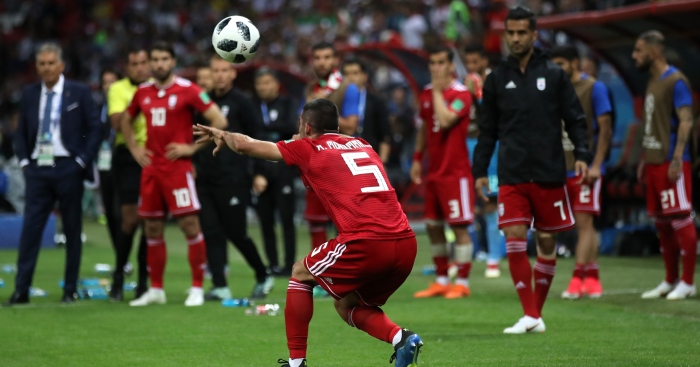 As with any major tournament year, 2018 has been responsible for plenty of memorable moments.

However, the footballing year should never be about brilliance and nothing else – sometimes we need to look beyond the excellence of the likes of Lionel Messi and Mohamed Salah.

Sometimes, rather than focusing on the good, we’ll need to look at the more ridiculous moments of the year – those which even those involved won’t be too desperate to recall.

Is it a bird? Is it a plane? Is it an EDL member’s DIY tattoo? Is it the logo for a brand of solvent adhesive? Is it a Gaviscon bottle?

Nope, it’s the Leeds United badge, released in January, which was compared to all of these things.

We thought it looks a bit like Matthew McConaughey’s scene-stealing performance in The Wolf of Wall Street, but each to their own.

Waking up in Australia to the new Leeds Utd badge ??
Thoughts ??? pic.twitter.com/iLR0UZlW1O

Iran achieved World Cup immortality, just not in the way they might have imagined. With the clock ticking down in the match against Spain, defender Milad Mohammadi had his chance.

The element of surprise was there, except he didn’t realise the only person he would be tricking was… himself.

Every moment was so meticulously planned, with one exception. Shame he missed off the most important part, really.

if u missed the iran player trying to do a front flip on a throw in you basically missed the best part of the world cup pic.twitter.com/NU1nIPZN4m

Michy Batshuayi hits himself in the face

It has been a bizarre year for Michy Batshuayi. The striker scored 21 goals in 2018, without ever really finding himself solidified in his starting place.

The goals have come for Chelsea, Borussia Dortmund, Valencia and Belgium, but the stand-out moment for Batshuayi, in international colours, was about as far as you can get from a goal.

It feels like Batshuayi has committed so much to incorporating comedy into his personal brand that even his subconscious decisions can feel like they’re being made with laughs in mind.

That’s our only explanation for him smacking the ball off the post and into his own face when he could have just… done nothing at all.

We all know West Ham United didn’t own the London Stadium when they moved in at the start of the 2016-17 season, but it was considerate of one of their fans to try to claim it on the club’s behalf.

At least, we think that’s what this guy was going when he strolled onto the pitch with a corner flag and planted it in the centre-circle in March, just like that American astronaut did with the moon.

Apparently there was a football match going on at the time, but no one remembers that – job done, I guess?

Anarchy at West Ham. Fan runs on the pitch … with the corner flag. #WHUFC pic.twitter.com/vlLju1hctW

Ascoli goalkeeper scores an own goal for the ages

However, we can’t accuse Ascoli goalkeeper Filippo Perruchini of anything like that.

After all, his own goal against Palermo is absolutely not the sort of thing anyone is capable of doing on purpose.

Go on Filippo, try this again. We bet you won’t be able to fool yourself for a second time.

Surely too late now for own goal of the year.

Football in 2018 has been all about some significant rivalries. Mo Salah vs Sergio Ramos, José Mourinho vs everyone, and, of course Roy Hodgson vs Harry the Hornet.

There must have been a reason for the former England manager deciding to take aim at the Watford mascot, as opposed to talking about the football side of the Crystal Palace-Watford rivalry, and we’re happy he found it necessary to do so.

“If you’re asking me whether Harry the Hornet, who I presume is the mascot, should dive in that way, I think it’s disgraceful,” Hodgson said.

That “who I presume is the mascot” is doing a lot of heavy lifting.

Why is Roy Hodgson beefing with Watford's mascot Harry the Hornet?! 😂😭 pic.twitter.com/qnNyIXMmhO

Patrice Evra and his bird

Who would have thought Patrice Evra playing for David Moyes’ West Ham just shy of his 37th birthday wouldn’t be the weirdest thing involving the Frenchman in 2018?

Our only regret is that he used poultry rather than a pheasant, preventing him from getting more mileage out of his trademark phrase “I love this game”.

Easy does it, Robin. Just take a touch, get the ball out of your feet and lay it off to your defender. There we g- wait, where’s the ball?

He also scored a baffling own goal in 2018, while playing for Chievo against Sassuolo in Serie A.

In perhaps the worst slow-motion scene since Karateci Kiz, Giaccherini casually chests the ball back towards goalkeeper Stefano Sorrentino, only to quickly realise Sorrentino has temporarily forgotten how to move his arms, legs, or any part of his body.

Rather unfortunate for someone of his profession, as we’re sure you’ll agree.

Chievo are sat bottom of #SerieA on -1 points, the last thing they needed this weekend was a comical own goal…

Right, I don’t think nearly enough is made of the fact that Hugo Lloris did this in a World Cup final.

His mindless attempt to dribble around Mario Mandžukić would be considered embarrassing if it had happened in a regular league game, and yet somehow the even bigger stage provided him with a let-off.

Within minutes of the blunder, we found ourselves talking about the slightly bigger matter of France being named World Champions, and their goalkeeper got off scot free. The perfect crime.

A Christmas wish for every PL team: Strikers, stadiums, Pochettino…

FPL wildcard time: Who to buy, who to sell, and when to play it