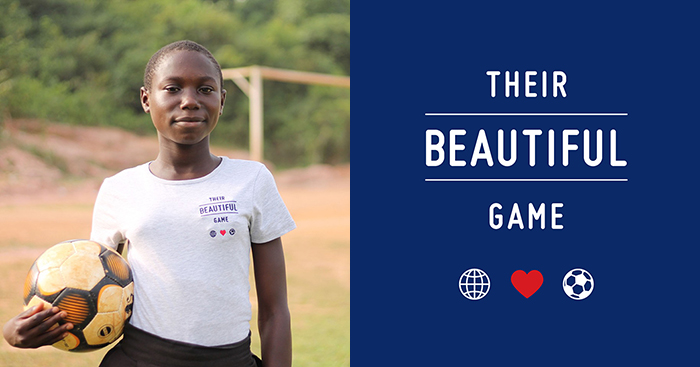 No matter how good or bad you are at football, most of you reading this will have experienced the buzz of a new football, pair of boots or kit at some stage of your childhood. But that isn’t the case for everyone.

Football is a universal sport, played by more people than any other across the world, but not everybody is playing with the new Premier League ball in the latest Nike or Adidas boots. Far from it, in fact.

Thankfully, there are people out there like David Oswell, who witnessed the lack of suitable equipment first-hand when volunteering as a football coach in Africa in 2009, then decided to do something about it.

After returning home to Australia he quickly set about creating Their Beautiful Game, a not-for-profit organisation that supports marginalised footballers of all ages, gender and ability – providing them with the resources they need to play.

And David has shared with us some of his favourite images that show just a few of the people the organisation has helped over the years. Before you go on, why not head straight to their website at theirbeautifulgame.org to donate some equipment yourself. 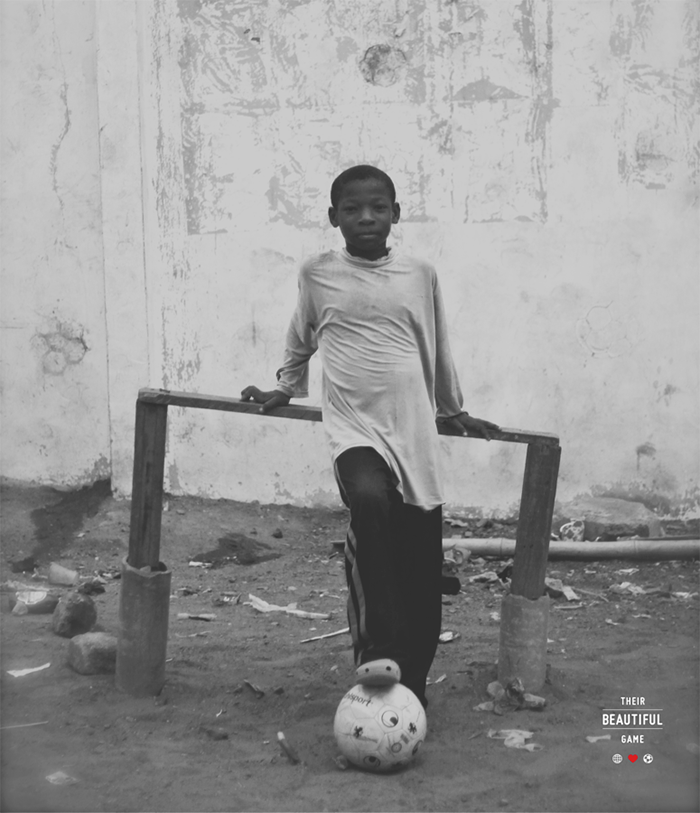 Here, a homeless Ghanaian boy proudly stands in front of his goals, with discarded piping and wood being used to construct the frame. The ball was donated to him by Their Beautiful Game, who came across him on the streets of Accra, Ghana’s capital city in 2011.

The boy, 11 years old, lived on derelict land behind the white wall in the background of the photo, sleeping amongst piles of garbage and burnt out vehicles.

His previous ball had most of the panels missing, but it didn’t prevent him from daily shooting practice. The donated ball was the first ever brand new ball he had kicked. 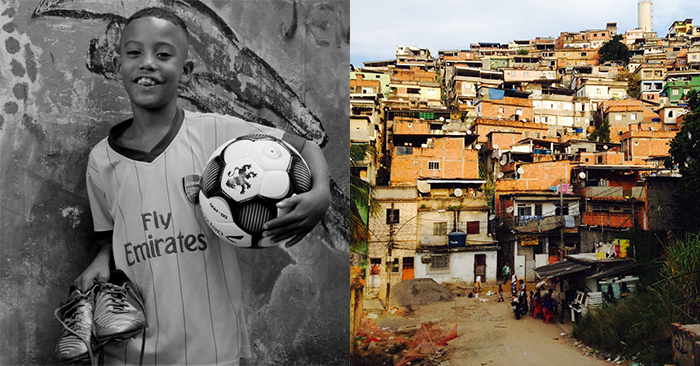 In Brazil’s favelas, football is a way of life, but for many children crime, drugs and child prostitution are a constant threat.

In 2014, Their Beautiful Game visited the Julio Otuni favela in Rio De Janerio. In the middle of the favela, a school has been set up by local lady Thais Corral, offering a sanctuary from the perils of the children’s surroundings.

Despite constant threats of violence by gangsters who attempt to recruit the young into their organisation, Thais and her staff have stood strong, using football as a way to keep her students engaged and out of trouble. 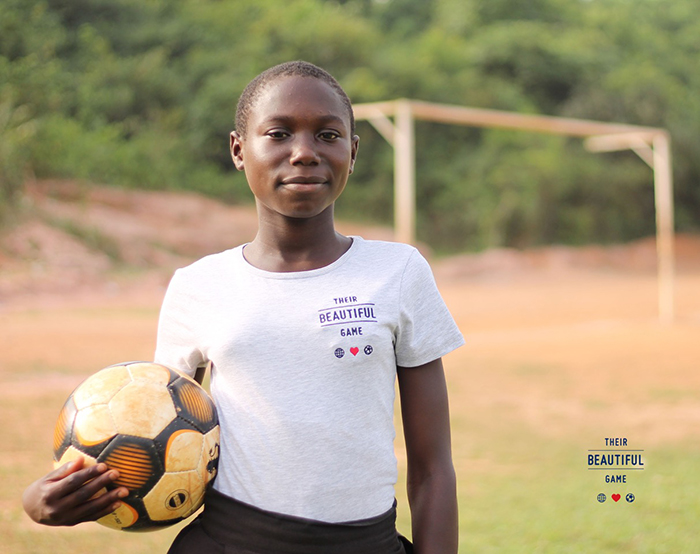 In many developing countries, girls and women are often denied the opportunity to play football, primarily due to either cultural or domestic expectations.

Here, a 14-year-old girl is pictured at the side of her home pitch. The girl plays for her school team, Children’s Home of Hope. The orphanage and school was set up and is run by local volunteers in Asebu, Cape Coast, Ghana.

Orphans in Ghana are vulnerable to child exploitation, trafficking and prostitution, and the school runs training sessions each afternoon for its students after lessons end, with matches against children from local villages at weekends as a way to engage those in its care. 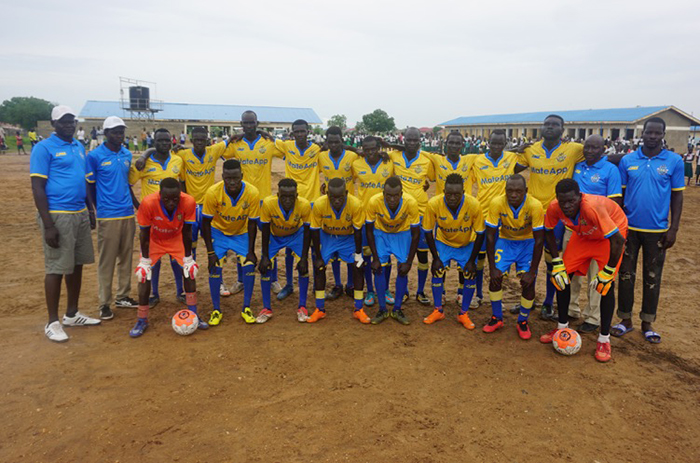 In South Sudan’s First Division, few players, even those who represent their country, own their own boots. With second-hand boots retailing at $70 and above in the capital city Juba’s markets, boots are financially out of reach for most footballers, who rely on sharing boots with fellow players.

In early 2017, Their Beautiful Game donated boots and balls to Citizen FC, ensuring that for the first time, their players had their own boots to wear for their league matches. 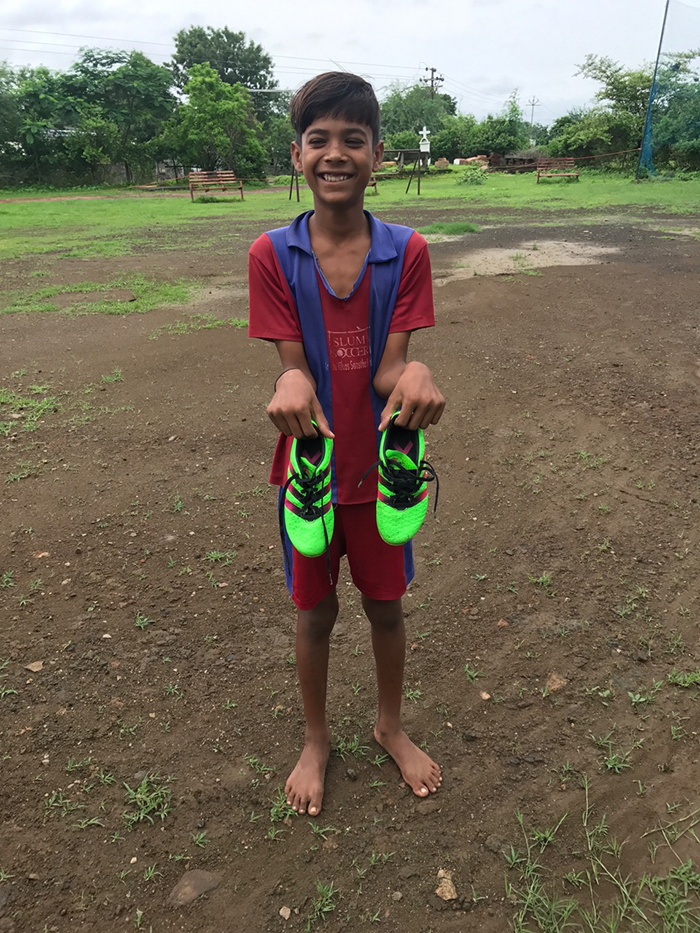 Their Beautiful Game partners with a range of charities in developing countries that provide welfare for those living in poverty.

Here, a pair of boots is donated to a player from Slum Soccer, an organisation based in Nagpur, India. Slum Soccer provides a safe environment for street children to meet and play football, whilst also offering education and life skills training. 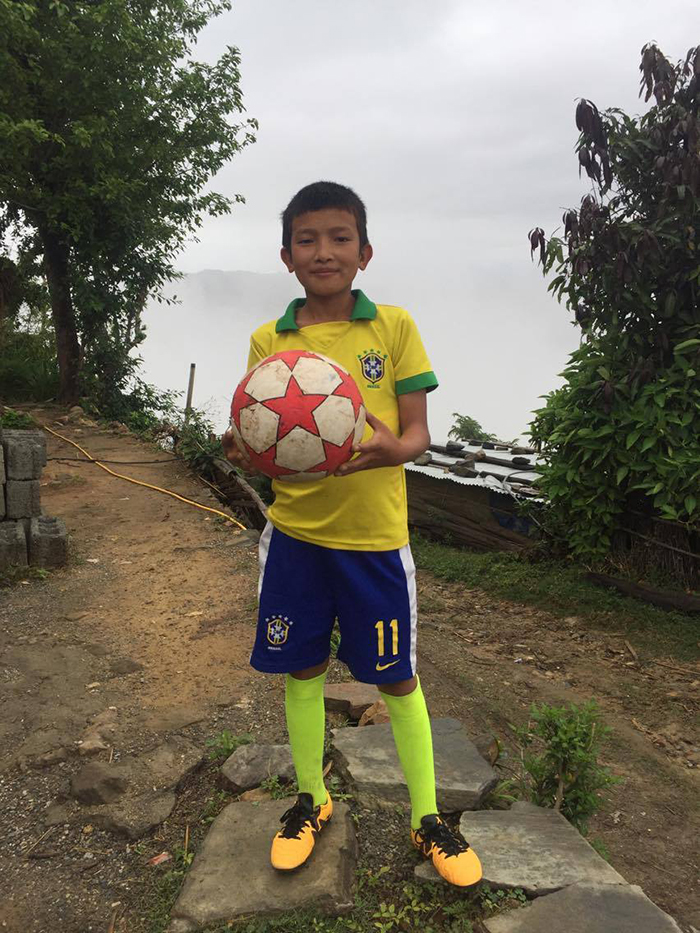 Football’s global nature is shown here as a young footballer holds his donated new ball, Brazil strip and trainers high up in the Himalayas in Manegau, Nepal.

With an average monthly salary of US$40, boots, balls and replica strips are out of reach for many Nepalese families. 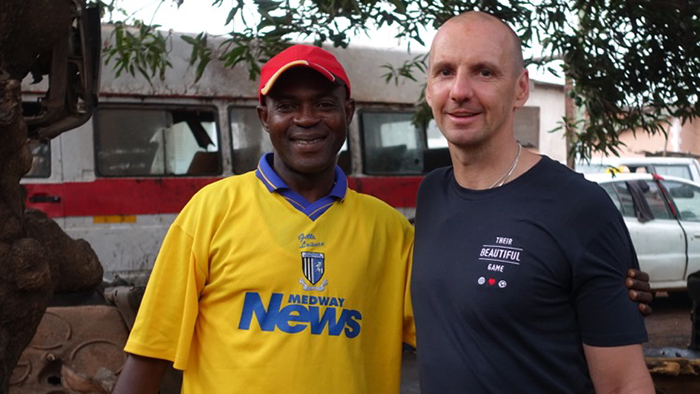 Over the years, Their Beautiful Game has worked with many inspirational people – those who despite living in poverty themselves, selflessly aim to ensure positive outcomes for the vulnerable in their communities.

Billa Mahmud (left, with Dave) set up a school for homeless street children in Labadi, Ghana in 1997. Billa wanted somewhere safe for vulnerable street kids in his community to be able to go, eat, learn and play.

The school began under a Mango tree as it was the best place to provide shade from the sun. Despite living in poverty himself, Billa made sure the kids had at least one meal each day so they didn’t have to search for food. 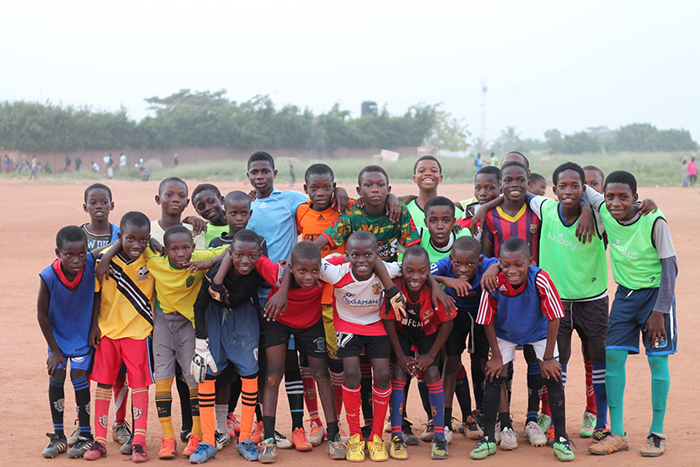 They were allowed to play football but only if all their school work was finished first.

As word of the school began to spread, more children wanted to attend, so Billa found bigger premises, which was of course, a bigger Mango tree.

Over the years Billa became been responsible for putting hundreds of children in Labadi through school, university and vocational training programs. 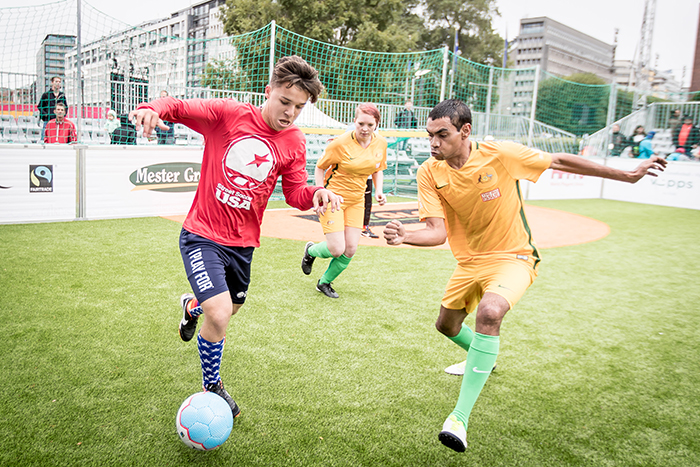 As well as working in many developing countries, Their Beautiful Game also supports a number of football projects for marginalised groups in society.

In addition to working with football programs for the homeless, Their Beautiful Game also raises funds to pay for one-on-one coaching sessions for recently arrived refugees – aiding their transition and settlement into society.

For many refugees, playing football provides a sense of normality following a period of trauma.

From one striker to another 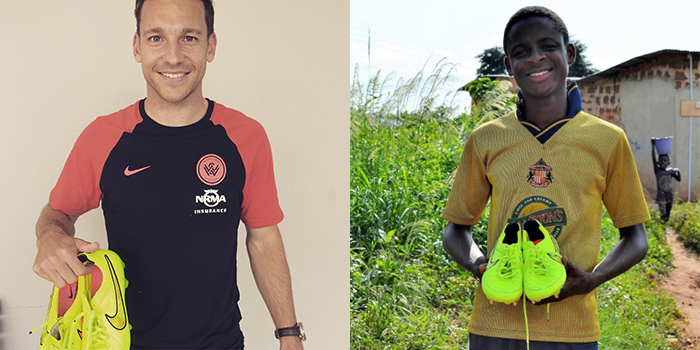 Their Beautiful Game works by people from across the football community donating boots they no longer use, which are then passed on to footballers in need. 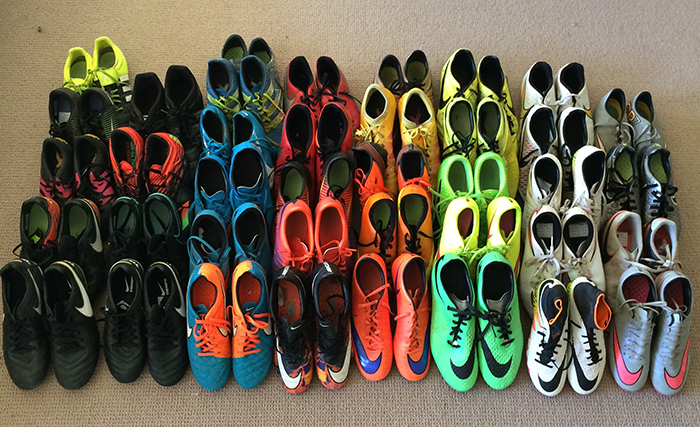 In the age of fast fashion, many of us go through our boots quickly, and at the start of the new season have boots in excellent condition that can be passed on.

Want to know more about how you can get involved and support football projects across the developing world? Visit www.theirbeautifulgame.org and check us more of their great work on Facebook and Instagram @theirbeautifulgame.