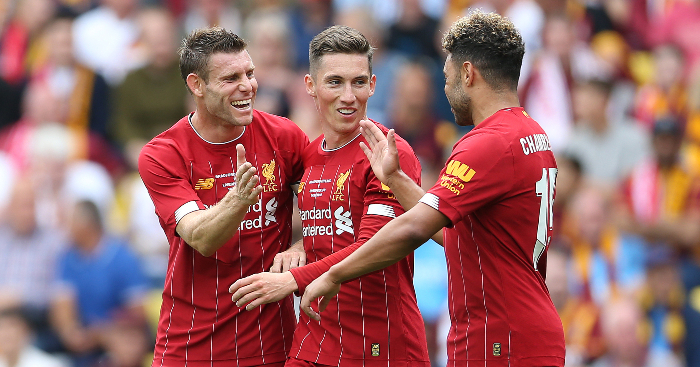 Liverpool have plenty of players their books not currently in Jurgen Klopp’s plans for the upcoming season.

It’s not quite the levels of Chelsea’s extensive loan army, but the club currently have already sent out 11 of their players the 2019-20 season, with a wide range of destinations – Brazil, Germany, Scotland…

Some of these were given opportunities to play with the first team in pre-season before being sent back out. It will be interesting to see if any of this lot ever make it in a Liverpool shirt further down the line.

Liverpool fans could be forgiven for thinking Allan Rodrigues de Souza doesn’t actually exist since joining as a teenager in 2015. He’s never made a competitive appearance for the club.

Now 22, the cherub-faced creative midfielder is on loan at his sixth club away from Merseyside. He’s spent time at Hertha Berlin, Apollon Limassol and Eintracht Frankfurt, which was cut short last season due a lack of playing time.

Currently back in Brazil with Fluminense, he’s due to stay with them until the end of the 2019 season.

The Serbian international midfielder is quite a player according to anyone that’s watched him during his loan spells at Cardiff City and Hertha Berlin.

He’s currently on his second loan spell with Hertha after being quite the hit last season. It doesn’t appear he’s in Klopp’s plans for the future, and there’s talk that the Bundesliga club will turn it into a permanent deal next summer.

Satisfied with how Ryan Kent developed at Rangers last season, Liverpool have now sent Sheyi Ojo to be taken under Steven Gerrard’s wing up in Glasgow.

Now 22 and expected to deliver, this could be a make-or-break move for the winger.

The 20-year-old Polish goalkeeper is at Huddersfield for the 2019-20 Championship season.

He made his debut in a 2-1 defeat to Derby County, with positives and negatives. There was a mix-up at the back which saw Tom Lawrence slot home the Rams’ opener, but he redeemed himself with some good saves.

We’re beginning to suspect that Woodburn might not become the bonafide superstar he looked in some of his early performances for Wales. That goal on his debut was nearly two whole years ago now, somehow.

He barely got in a look-in for Chris Wilder’s Blades on loan there last season, and has had to drop down to League One side Oxford United in order to get assurances of more regular minutes.

This is one of my favorite videos. It still gives me chills. Wales vs Austria 2017. Wales crowd singing their national anthem and results in a debut goal for 17 year old Ben Woodburn. pic.twitter.com/Mfhpc62KIO

Earning a reputation as a commanding centre-half in the academy, he featured in Liverpool’s FA Youth Cup win earlier this year.

He’ll be getting a taste of senior football for the first time at sixth-tier Kidderminster Harriers.

The Nigerian striker has joined Mainz after previous spells away from Liverpool at NEC, Gent and Royal Excel Mouscron. He was linked with a permanent move away, but nobody stumped up the reported €15m asking price.

A full Canada international, Millar enjoyed his time at Kilmarnock last season so much that he’s decided to go back.

Wilson enjoyed a stellar breakthrough campaign at Derby County last season, ending it as their top scorer and putting together a hell of a highlights reel of long-range strikes, including an unforgettable free-kick that helped the Rams knock Manchester United out of the FA Cup at Old Trafford.

After demonstrating what he can do for his parent club in pre-season, he’s secured Premier League football for Bournemouth in the upcoming campaign.

“What impressed me though is his shooting ability,” said his new manager Eddie Howe. “He makes things happen and we’re excited.”

He might not make it at Liverpool, but he’s got a great story. The centre-half was released by Bolton and suffered a stress fracture in his back whilst playing for Liverpool’s Under-23s, before coming back to really impress during the senior side’s US tour last summer.

He’ll be playing for VfB Stuttgart next season as they aim to get promoted back to the Bundesliga.

The England Under-21 international midfielder did well for Reading as they navigated to safety in the second half of last season.