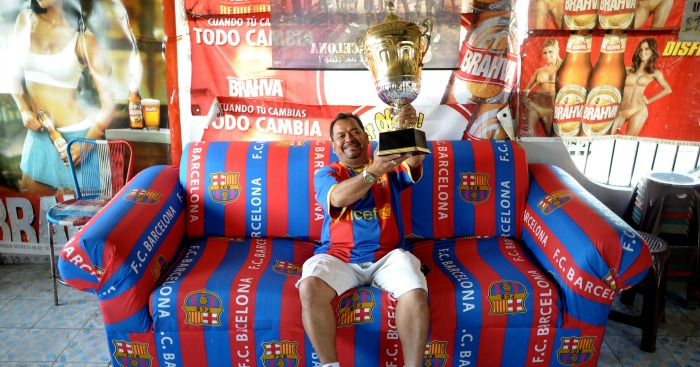 The buzz of watching live football in the stadium is hard to recreate – but it’s not always possible to be there.

Ticket prices are high, you’ve got to work, and sometimes you just have other commitments, so rather than sneer at the armchair supporter, we’ve decided to sympathise with them.

They might not have to worry about the traffic getting out of the stadium or trying to get a pint at half-time, but watching football at home or in the pub does not come without its own problems.

You can’t ‘watch’ a game in the pub

It’s cost you five pints and three packs of crisps to sit in a pub full of opposition fans, hardly being able to see the screen and hearing none of the commentary. And you’re losing 3-0…

The fight for control of the TV

Most football fans with partners that don’t love the beautiful game will begrudgingly give up control of the TV from Monday to Friday, safe in the knowledge they’re building up enough points to get full access on Super Sunday.

For the most part, it’s a happy life of compromise. But then there’s a midweek game. It’s a big one, but it clashes with Corrie.

You can’t afford a ticket and don’t want to go to the pub (see point one), but the other half won’t budge. It only leaves one option…

Now we can only go off anecdotal evidence – we would never illegally stream a match, honest – but we hear it can be very frustrating watching a live stream of a game.

He’s beat one, he’s around a second, he’s closing on the box, he’s….oh for fu…aaarrrrghhh…

Soccer Saturday is brilliant yet awful

Soccer Saturday is amazing. Probably the best programme on TV ever, in fact. But not so much when the commentator of your goal shouts ‘goal!’ yet Jeff Stelling carries on reading through the list of Scottish First Division goals that have just gone in.

Lots of match-going fans have an accumulator bet at the weekend, but they don’t go through anywhere near the same level of torture as those having Jeff Stelling read out the goals as they go in.

They just won’t understand the pain of celebrating Leyton Orient’s 89th-minute winner only to hear within seconds that Partick have scored an even later equaliser at Celtic. “One off, always f***ing one off.”

The person who knows nothing about football

They think you’ll appreciate the company, keep asking questions and try really hard to sound like they know what they’re talking about.

But you’re 3-1 down and they’ve just accidentally celebrated an opposition goal. Can’t you wallow in your misery alone?

It used to be following a game on teletext

Back in the day, before Sky Sports and online betting, waiting for the page your team’s score to appear on Teletext or Ceefax was about as scary as life got.

Did anyone else cover one half of the screen with their hand to see if the opposition had scored first? And then slowly move your hand from over your team’s score, full of hope, only to find there was an extra page because bloody Swindon, not Tottenham, had scored? Just us? Oh.

5 years ago today, Ceefax ended. Like if you used to check the football scores on Ceefax 👍 pic.twitter.com/dI9KhYLfKk

You can’t stay off the internet

There are still 80 minutes to go. There’s plenty of time to turn this around. But the rage you feel is uncontrollable. A rant on a forum or Twitter about why your manager should be sacked and why the whole squad needs to be solved is the only thing that can make you feel better right now.

The trouble is, sometimes they actually do turn things around…

Your view will be deemed irrelevant

You watched the game, saw 15 different replays of the major incident, listened to the analysis and read five different match reports within 10 minutes of the final whistle, yet someone will still say they can’t take your view seriously because you weren’t at the match. “You just wouldn’t understand, mate.”

You’ll wish you were there

It costs a bloody fortune. And there are plenty of days when being able to just turn off the TV after the fourth goal flies in makes you so glad you’re sat at home.

But on those rare days of glory – the last-minute winners, the penalty shootout wins, the slaying of the giants – you’ll just be gutted you weren’t soaking it all in at the stadium.