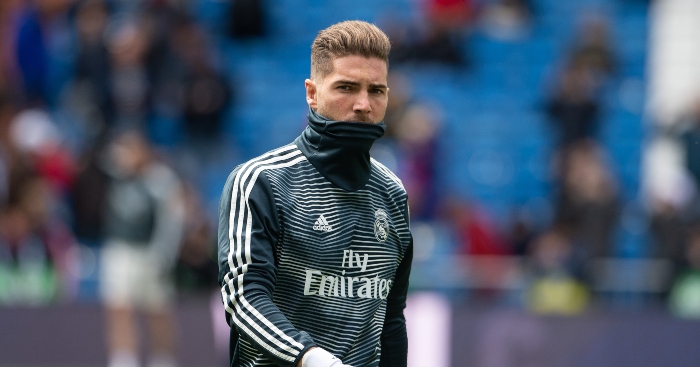 There’s nothing like the emergence of the son of a footballer you watched to remind you of the inexorable march of time.

Those who grew up watching the 1994 World Cup will remember the shudder they felt when Bebeto’s son Matheus, the baby of his goal celebration, made his professional debut.

Those who are a little younger will have had similar emotions when watching Justin Kluivert or Timothy Weah for the first time, but now we’ve got a whole new group of players close to following in their famous fathers’ footsteps.

We’ve already had to deal with the shock of Ian Wright’s sons making their debuts, but now his grandson is closing in on the same thing.

D’Margio, son of England winger Shaun, turns 18 in September. He’s on the books of Manchester City, just like his old man, and made it into a couple of Under-23 matchday squads during last season’s Checkatrade Trophy.

The winger also appeared in last season’s FA Youth Cup run, though he wasn’t involved as City lost the final on penalties to Liverpool.

Today in 'Oh My God I Am So Bloody Old' news: Shaun Wright-Phillips' son, D'Margio, is 17 and plays in Manchester City's academy.

We already knew about Lilian Thuram’s son Marcus playing in Ligue 1 and moving to the Bundesliga this summer (ed: did we?), but now Marcus’ younger brother is getting in on the act.

A midfielder, Khéphren Thuram came through the Monaco academy before moving to Nice in June and will hope to make his league debut this season after being handed some first-team minutes by Thierry Henry in last season’s Champions League.

“He was very quickly convinced that his development as a player would be spent playing time in a team that plays football and possession in a club that does not hesitate to give a chance to young players,” Nice technical director Gilles Grimandi said when the signing was confirmed.

With links to Henry, Grimandi and Nice boss Patrick Vieira, might we eventually see him at Arsenal?

Plenty of fans have had their eye on Luca ZIdane for a while – how can you not, given his surname and his presence on Real Madrid’s books?

The goalkeeper has played his fair share of games for Real Madrid Castilla but also turned out for the first team on a couple of occasions, most recently in a 3-2 La Liga victory over Huesca in March.

He’ll spend the 2019-20 season at Racing Santander in the Segunda División, providing the French youth international with a chance to get a full season under his belt at a decent level.

Another third-generation player, Maldini’s father Paolo and grandfather Cesare both played internationally for Italy, while his older brother Christian has spent the last few seasons in the Italian lower leagues.

Daniel, like his brother, began his career at Milan. However, he is still at the club and featured in their pre-season tour of the United States, starting against Bayern Munich and coming off the bench against Benfica.

Unlike his dad, Daniel is a forward. Hopefully back garden games against one of the best defenders of his generation gave the youngster all the practice he needs.

Turns out Joe is now 21 and a professional. Isn’t the passage of time horrible?

He recently joined VV Noordwijk in the Dutch third tier, having previously spent time on the books of Ajax, ADO Den Haag and RKC Waalwijk.

It’s been a while since we had a striker who could properly hammer shots in off the bar, but if anyone can take the reins it’s surely Tony Yeboah’s son.

Kelvin, who turned 19 in May, spent time on the books of West Ham United as a youngster before signing a pro deal with Austrian club WSG Swarovski Tirol last summer.

He scored twice as the club won the Austrian second division to earn promotion to the Bundesliga and made his first appearance of the 2019-20 season in the first round of the Austrian Cup.

Eidur Gudjohnsen famously replaced his father as a substitute to make his international debut in 1996, so is it any wonder his sons have followed him into professional football?

Sveinn, the eldest, plays for Italian Serie B side Spezia and has more than 50 senior club appearances in two countries under his belt, and Andri – the middle son – is next in line.

The 17-year-old is on the books of Real Madrid, currently in the Spanish club’s youth set-up, but will hope to eventually progress to Real Madrid Castilla and, if he makes good progress, the first team.

Just like Daniel Maldini, years of practice against a top defender – his father Des – prepared Lewis Walker well for a career as a striker.

The 20-year-old, whose older brother Tyler is also a forward, made his first Championship start for QPR back in April – ironically against Des’ former club Nottingham Forest.

It feels like just yesterday that Teemu Tainio was playing Premier League football for Tottenham and Sunderland, but the Finland international might soon not be the only member of his family with minutes in the English top-flight.

His son Maxi, a defender or midfielder, joined Spurs at 15 and has been working his way through the ranks.

He made his Under-23 debut last season and, based on Mauricio Pochettino’s willingness to give youth a chance, must be hopeful of making the step up.

Another member of a Finnish footballing dynasty, the younger Jääskeläinen is a goalkeeper, just like his father Jussi.

Twenty-one-year-old Will started out with Bolton, where his old man played more than 500 games, but left the Trotters for Crewe Alexandra in 2017.

After a series of loan spells in non-league, he finally made his Crewe debut late last season and has been in goal for the first two games of the League Two season.

If you’re called Klinsmann, there’s probably always going to be too much pressure on you if you decide to play up front. Smartly, then, Jürgen’s son Jonathan is a goalkeeper.

The 6’4″ stopper played one game for Hertha Berlin, in the 2017-18 Europa League, but moved to St. Gallen over the summer and will hope to feature in the Swiss Super League.for the club.

Klinsmann jr. is eligible for the United States and Germany at international level, but the US have been keen to secure his services.

He’s played at youth level for the Stars and Stripes, and earned a maiden senior call-up in 2018, but is yet to make a competitive appearance under Gregg Berhalter.