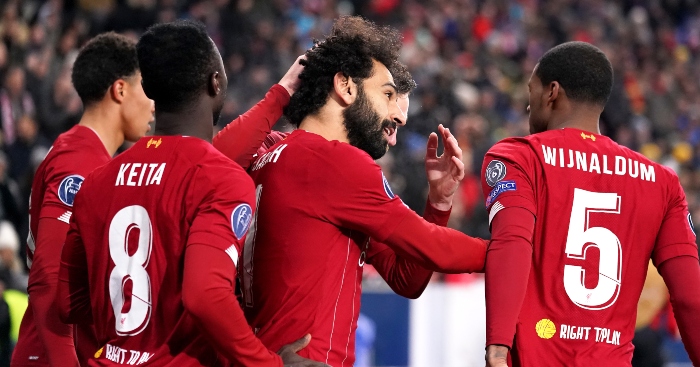 You don’t win anything in English football for calendar year achievements, but they’re often a good guide to success – Liverpool will certainly hope that’s the case.

Jurgen Klopp’s squad won the Champions League and Club World Cup, and will hope their start to the Premier League season is rewarded with a first league title in 30 years.

Here’s a look at the frankly terrifying stats behind the Reds’ achievements.

– Liverpool have won 42 games in 2019, or 44 if you include the Premier League triumphs over Chelsea in the UEFA Super Cup and Arsenal in the League Cup. To put this into context, Manchester United and Tottenham have won 51 between them in 2019.

The Walk of Champions at Anfield has had a little update 😍 pic.twitter.com/x8sFiyJD4N

– They have scored four or more goals on 12 different occasions since January 1, most famously against Barcelona in the Champions League semi-final.

– They have scored 27 goals in the 80th minute of a match or later, including several stoppage time winners in the league.

5 – Sadio Mané is the third Liverpool player to score in five consecutive Premier League games against an opponent, after Michael Owen vs Newcastle and Luis Suárez vs Norwich. Scourge. #CRYLIV

– Their 97 point tally in the 2018-19 Premier League season was the highest ever from a team that failed to win the title, and the third-highest ever in the competition.

– Salah scored the fastest Champions League goal of the decade when he opened the scoring for Liverpool against Tottenham in Madrid.

– Liverpool have gone 25 home games without defeat in 2019, in all competitions, winning 21 and drawing four (including one draw which was followed by a penalty shoot-out victory).

– In 18 home league games in 2019, Liverpool have recorded 17 wins. Their current run of 16 in a row is only four shy of the all-time Premier League record, set by Manchester City in 2012.