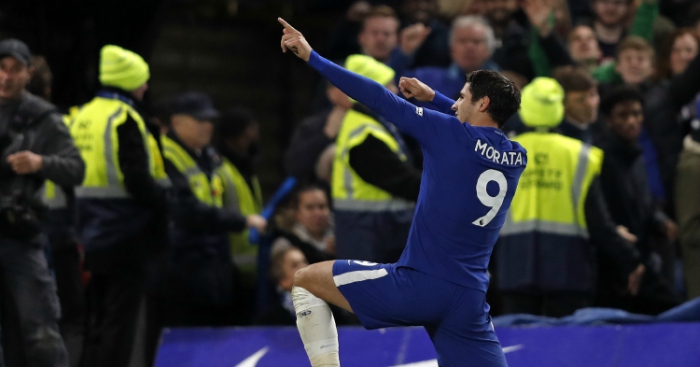 Chelsea, Tottenham and Manchester United men caught our eye this weekend, as well as a former Liverpool hero.

It’s usually a pretty impressive feat when a player scores two free kicks in one match, but Bologna forward Verdi went that one step further to make sure people took note after he was left out of Italy’s squad to face Sweden in the upcoming World Cup play-offs.

The 25-year-old stepped up to open the scoring against Crotone in a Serie A match on Saturday, leaving goalkeeper Alex Cordaz stranded with a well-placed left-footed effort.

Free kicks with either foot? Not a problem for Verdi. Left… pic.twitter.com/egiBHu4EgD

But what Verdi did next was even better.

Just seven minutes after his opener, and three minutes after Crotone equalised, the Italian stepped up again. Only this time he went with his right.

Son netted the only goal on Sunday as his Tottenham side stumbled to a 1-0 victory over Crystal Palace at Wembley.

But his 20th Premier League goal for Spurs made him the highest scoring Asian player in the history of the competition, knocking former Manchester United man Park Ji-Sung off the top spot. Well in, Son.

The same game saw former England manager Roy make a return to his old fortress in the capital, and he was up to his old, perfectly Vine-able, tricks on the touchline once more.

Swansea City 0-1 Brighton & Hove Albion. Not exactly free-scoring you may think, but this is by far the best useless stat of the weekend.

Every goal in Saturday’s Premier League 3pm kick-offs was scored by a former Brighton player. Including Brighton’s.

Bournemouth’s match-winner at Newcastle was Brighton academy graduate Steve Cook, and Glenn Murray, who netted the only goal at Swansea, first moved to the Seagulls in 2008, rejoining last year after a five year absence.

That victory moved Chris Hughton’s men up to eighth in the Premier League table, and chairman Tony Bloom celebrated by sharing a tube of Pringles with a supporter on the journey home.

Yes, Morata may have ended a six-week long goal drought and led his Chelsea side to victory over rivals Manchester United, and former manager Jose Mourinho, but we’re more impressed by something else he did in the game.

On the stretch, with the ball played behind him, the Spaniard pulled off a quite brilliant overhead scorpion pass to teammate Eden Hazard, keeping the attack alive.

The gift that keeps on giving. From ridiculous facial expressions to ridiculous defending, the man Steve Kean said is “destined to lead England” outdid himself in Sunday’s pivotal clash at Chelsea.

Marcos Alonso crossed from the left, and Jones, while stretching to head the ball away, managed to thump a belting volley into the top corner. Of his own net.

Fortunately for Jones, it was ruled out for a push by eventual match-winner Morata.

If only Liam was sat next to them. Morrissey was probably too busy with Joey Barton.

“…and he keeps leaving messages on my phone moaning about everything – road works, Polish Tesco delivery drivers. Falafel.” pic.twitter.com/yPh5SIFYbQ

Williams was the star of the show in more ways than one as her Reading team knocked former club Arsenal out of the Continental Tyres Cup.

The England midfielder, who has earned over 160 caps for the Lionnesses, opened the scoring just after half time, only for Beth Mead to equalise.

However Williams’ reply could not have been any more instant, as she struck the ball direct from kick-off, catching Arsenal goalkeeper Anna Moorhouse out with an excellent strike.

They just can’t leave each other alone, can they?

No one grows up & wants to be @GNev2 😱 pic.twitter.com/Jd1WfksmIv

Sometimes goals are just beautiful, and this is one of those that gets better every time you watch it.

Aaron Meijers is the main architect, playing the initial pass before making a great run and finishing brilliantly, but the intricate build up play here is something to behold.

Germany have unveiled their kit for the World Cup in Russia next year, throwing it back to the 90’s with this absolute stunner. Feast your eyes.

Pulisic, Weah, Litmanen & the most exciting players not to play at the WC

Can you name every player to wear no.7 for Chelsea in the Premier League?