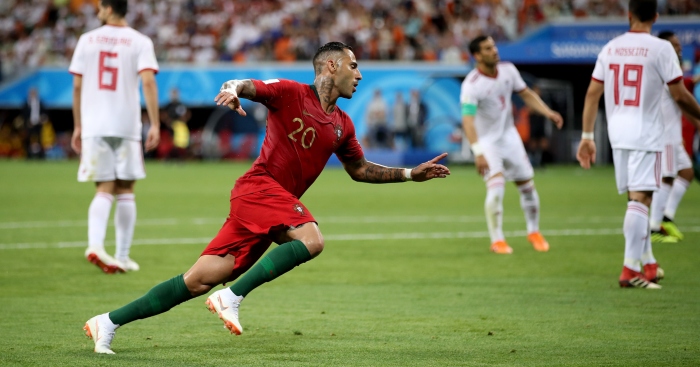 On a dramatic day 12 at the World Cup, a former Chelsea loanee and a Watford winger both captured the imagination.

Uruguay secured top spot in Group A with a 3-0 win over Russia, while Group B went right down to the wire, with Spain and Portugal both made to sweat over qualification.

This actually made us make a bit of a weird noise.

This shot also made us make a bit of a weird noise.

What d’ya think of VAR, Nordin?

Forty-five years old. The oldest player to appear at a World Cup. Still got it.

The World Cup is ace.

Iran’s goalkeeper Alireza Beiranvand ran away from home, grew up homeless, and slept outside his local team's football stadium. People gave him change because they thought he was a beggar. Tonight he's just saved a penalty against Cristiano Ronaldo in the World Cup.

We’re not sure this American football style tactic at the wall worked out too well.

Genre defining stuff from the Russian player on the right hand side of the wall. pic.twitter.com/YdJsbP9hrV

Just watch out for the t-shirt.

The Austrian brewery really have saved the day.

We dread to think what age we’re going to have to live to before we see England win the World Cup.

Orlando Menoni (101) has seen Uruguay become world champion on four occasions and hopes to see La Celeste win it for the fifth time in 2018.

Lawro has been winding up a few people at this World Cup, but we’ll always love him.

To think Mark Lawrenson has played and commentated on football all his life, and this is still his greatest moment on television is literally astonishing 😂😂 pic.twitter.com/UlJejZgaz1