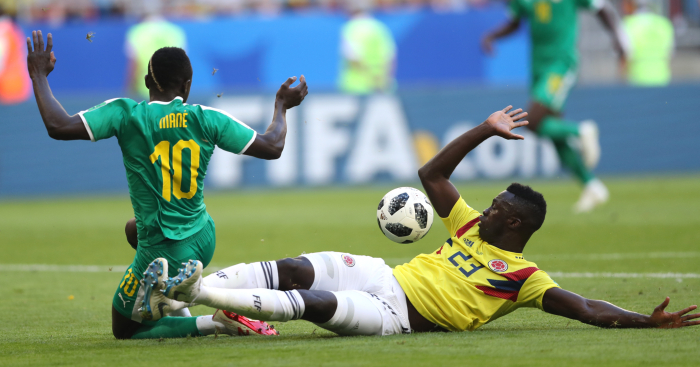 England played out an excellent tactical defeat against Belgium, while Chelsea, Liverpool and Tottenham players caught our eye on day 15 in Russia.

Gareth Southgate’s Three Lions made eight changes for their final group match, surely a sign that this was all part of his master plan to lift the World Cup next month. Have you ever been more convinced it’s coming home?

Meanwhile, Chelsea’s Michy Batshuayi celebrated in an unorthodox fashion, while we got a brilliant picture of two Colombian icons.

From ecstasy to agony. Literally. We’ve tried, but it’s actually impossible to get tired of watching this.

At least his team-mate kept us up to date.

Guys it's all good between them 🙏🏽 pic.twitter.com/1fLdTTc1eE

To be fair, Batshuayi took it well.

The second just before I knew I f*cked up #InternetUndefeated 😂 pic.twitter.com/wAf5Wt6QvK

It wasn’t as good as Batshuayi’s celebration, obviously, but we enjoyed this.

And when you’ve stopped enjoying Martinez’s reaction, look at Thierry Henry in the background. It’s layered.

There has to be a first time for everything, but this is pretty harsh on the Senegal lads. We’ll miss their fans.

The first team in World Cup history to exit the competition because of yellow cards#SEN #SENCOL #WorldCup pic.twitter.com/J5TzEbl4sx

A couple of very old tweets from Southgate’s now inactive Twitter account are beginning to surface, and we’re enjoying it.

Apologies think I left Harry Kane of that starting XI

Taking time out from ridiculous ‘f*ck it’ moments, Khazri managed to grab a goal and an assist against Panama, becoming the only player to register two of each during the group stage.

2 – Wahbi Khazri is the first player with both 2 goals and 2 assists at the 2018 #WorldCup. Versatile. pic.twitter.com/mQDvVzAOAs

There had been a lot of complaints when the World Cup announced it would expand to 32 teams, but this year’s tournament has been incredibly competitive.

😳 …for the first time in history. pic.twitter.com/BK2LVuazLx

What a tackle this was. And fair play to VAR for getting it right.

It’s always brilliant seeing legends in the current day, and we really hope these two heroes are the best of friends. They are in our minds, anyway.

😍Really hope Colombia go through just so we can carry on seeing this bromance…#SENCOL#COL#WorldCup pic.twitter.com/ml4KrvTcD3

How Germany is reacting after World Cup exit: Surely there’s a word for this?