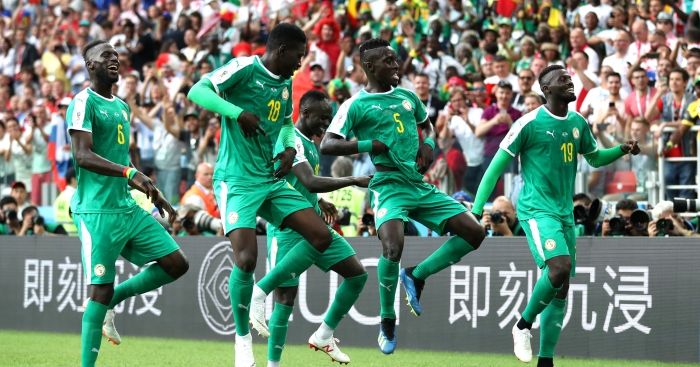 Senegal have quickly become our favourite team at the World Cup, thanks in no small part to a Liverpool forward and his team-mates looking like they’re having the time of their lives.

Day six of the World Cup was possibly the most exciting yet, with Senegal and Japan upsetting Poland and Colombia respectively, while Russia all-but secured their place in the knockout rounds by beating Russia.

We’ve looked back at some of the best of the action on and off the pitch.

The Liverpool man loves a celebration.

The former Portsmouth and Birmingham midfielder is our new favourite manager in the tournament.

Aliou Cissé: Easily the most GIFable coach at this World Cup.pic.twitter.com/SpcDA3dSYo

Japan’s fans received plenty of praise for cleaning up their section of the stadium after their win over Colombia, and they were even given a helping hand by opposition supporters.

The gesture was also later repeated by Senegal supporters, too.

We want to party with this lot.

Despite Senegalese fans bringing real colour to Moscow, the police are currently searching all their rooms – supposedly to find out why the fans are dancing so much. I kid you not. A sweep is going on right now, with a police dog in tow. #WorldCup pic.twitter.com/UuW5S1pIIZ

As insightful as ever from Phil. It’s worth a watch until the end.

The absolute cheek of this…🤭

The race for the Golden Boot

We could be in for a surprise winner this year.

Own Goal (5) well on his way to the Golden Boot.

This Russia fan was a brave boy. At least for a little while.

Everybody involved in making this headline should give themselves a pat on the back.

Given we signed Cheryshev on Football Manager a few years ago, we can’t help but feel a genuine sense of pride at how well he is doing.

Before the FIFA World Cup, Denis Cheryshev had never scored an international goal…

Now he's tied with Ronaldo in the race for the golden boot. pic.twitter.com/16A1QSRm88