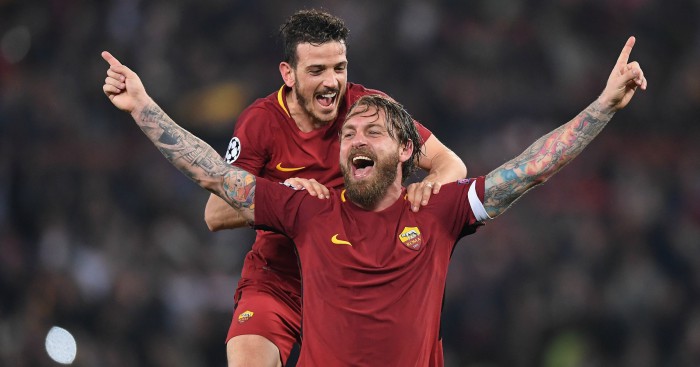 Well then, where to start? In one of the most incredible weeks of European football, we also loved moments from Wolves, Aston Villa and Watford players.

Both the Champions League and Europa League produced some of the most extraordinary storylines with a number of incredible comebacks.

Meanwhile, in the Football League, the Goal of the Season competition could be made up of strikes from this week alone.

Peter Drury’s commentary wasn’t the only spine-tingling effort from the gantry during Roma’s incredible comeback.

The Roma great wasn’t going to miss out on these celebrations.

What a comeback. What a night. What a sport. pic.twitter.com/emzlTjRcjX

It’s safe to say everyone at Roma had a pretty good, albeit expensive, night.

Ruben Neves with yet another absolute rocket to make it Wolves 2-0 Derby County! 🚀🇵🇹

Also shoutout to this pic of the Wolves fans’ reactions.

Those are the astonished faces of people who have sat patiently through 35 years of underachievement, nothingness and Dean Saunders witnessing a truly world class footballer playing for their team. pic.twitter.com/lUW5XaQ6GV

Okay, you get the idea by now.

That was an absolute peach! 🍑

Recap and reaction from Villa's 1-0 win over Cardiff is here: https://t.co/UZRDBOXI2R https://t.co/P8Q4oFwqI0

The Portugal international pulled off this stunning nutmeg against Belgium this week.

The National League side won Twitter with their take on Harry Kane being awarded his goal against Stoke.

Our second goal at @TranmereRovers last night has now been awarded to Harry Kane. https://t.co/4mAUfiYgPU

Plymouth’s 24-year-old defender was given the all-clear from testicular cancer this week, three months after receiving the diagnosis. Legend.

When you get the green light and given the all clear ✅😎 Long hard few months but I said we’d beat it and we have!💪🏻 it may be able to knock us down but it definitely can’t keep us down!!! Thanks everyone for the support all the way through this dark time! pic.twitter.com/ND0wx8kuBW

It was The Chief’s birthday this week. We celebrated by remembering his heroics in goal for Leeds United against Manchester United, and he celebrated by tweeting us. Not gonna lie, we got a bit giddy.

Here's a video of Lucas Radebe sitting down to volley one in against Partizan Belgrade. Have a nice day. #LUFC pic.twitter.com/PgCwHbwIpt

Hahahahah remember as if was yesterday

Whatever your opinion on Deeney, watch this brilliantly candid interview and you will almost certainly see him in a different light.